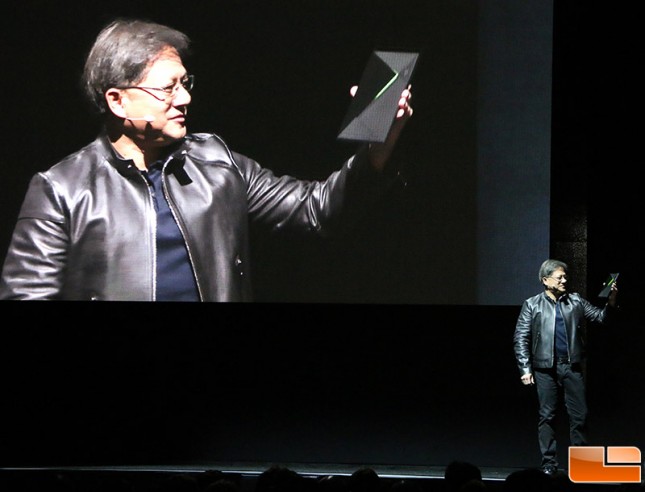 NVIDIA CEO Jen-Hsun Huang just got done speaking at the Made To Game event tonight in San Francisco and he had some major announcements that will change gaming forever. It is clear that gaming has gone to the living room in recent years and one of the more recent gaming trends is that people are using gaming tablets and then connecting them to their TVs with Google Chromecast to share games and videos. NVIDIA sees this as just the tip of the ice berg and the sign of things to come. Jen-Hsun believes that the mobile cloud will revolutionize the living room with smart TVs. These smart television devices will replace dedicated devices over time just like an smartphone applications have replaced many things in your daily life. Jen-Hsun believes that everyone will want a smart TV and that NVIDIA something to add to this market. 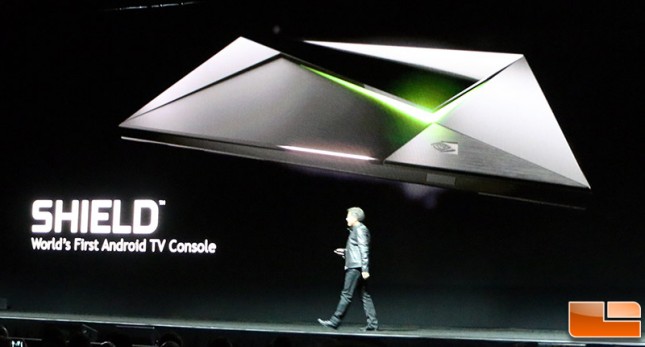 The first big announcement tonight is the NVIDIA SHIELD set top gaming box that that is the world’s first Android TV console designed for use in the living room (press release). The NVIDIA SHIELD is made from a single piece of die cast aluminum and the slim and sleek device looks different from every angle it is placed. The NVIDIA SHIELD can be laid down or stood up and measures just 130mm x 210mm x 25mm (LxWxD) with a weight of 654g. It features robust connectivity features, so on the SHIELD you’ll find HDMI 2.0, Gigabit Ethernet, dual-band 802.11ac wireless, Bluetooth 4.1/BLE, Two SuperSpeed USB 3.0 ports, a micro-USB 2.0 port, IR receiver and a miroSD slot. The NVIDIA SHEILD has 16GB of internal storage, but you can expand that with external storage devices or with the internal microSD slot that supports microSD memory cards up to 128GB in capacity. 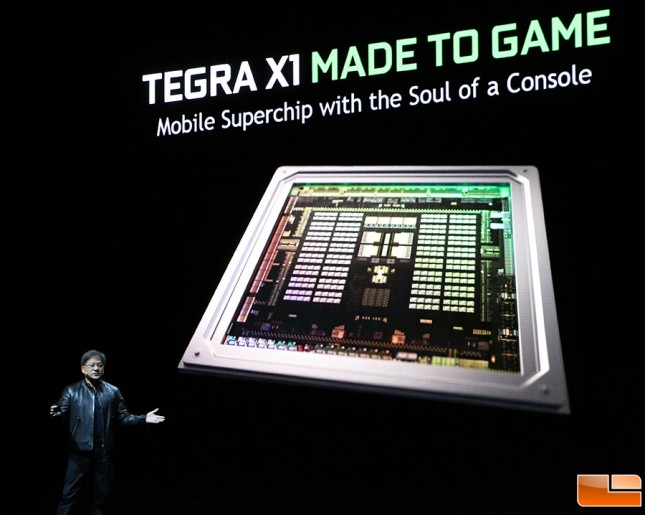 The NVIDIA SHIELD is the first 4K Android TV device that can play 4K Ultra-HD playback and capture at up to 60 fps (VP9, H265, H264). The NVIDIA SHIELD is powered by the Tegra X1 processor with 3GB of RAM. NVIDIA says that it can receive and playback 4K 60Hz, 10-bits per pixel at 30 frame per second video once the service becomes available very soon. The NVIDIA SHIELD will play games, videos, music and it can all be done by voice activation.

The NVIDIA SHIELD was designed to be whisper quite. Everything from the location of the processor to the spacing on the fan blades to the design of the exhaust outlet was scrutinized during the design phase to ensure the SHIELD is quiet. The NVIDIA SHIELD comes with a built-in microphone for in-game chats or for navigation. 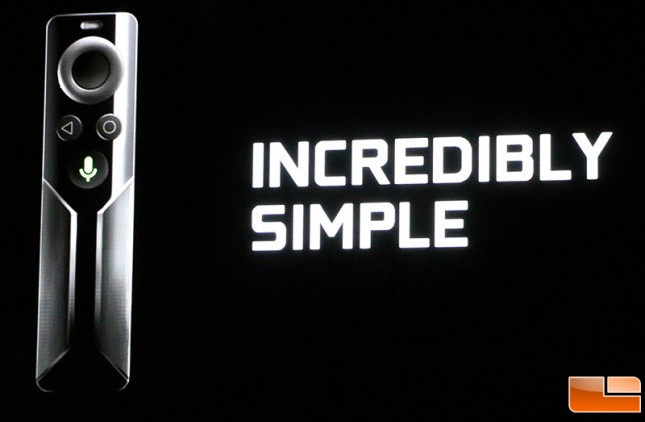 You also have the ability to buy an optional Bluetooth connected remote for the NVIDIA SHIELD. The remote has a microphone on the top that has a one button search feature. It also has the ability to be a Bluetooth receiver in the event you wanted to plug in your headphones, so you can enjoy your television or gaming experience privately. The volume button is in the middle of the remote and was designed to be used by your thumb. This remote was designed to be intuitive. The back is made from aluminum and the front is made of plastic with a high-gloss finish. The internal batteries are rechargeable through a USB port, so you never have to change the batteries. There has been no pricing announcement made for the remote control, but we expect it to be out in May 2015. 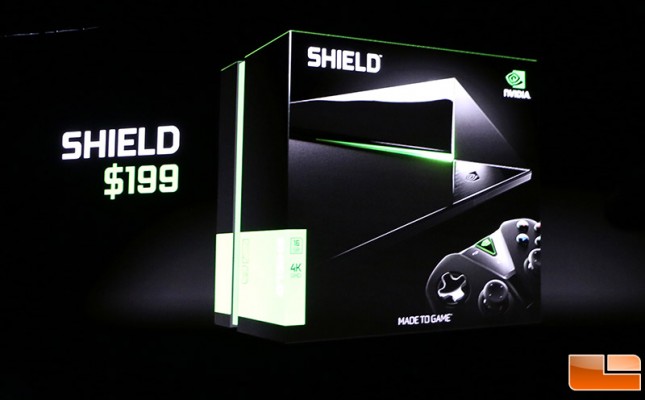 The NVIDIA SHIELD game console will be $199 and will be bundled with the game controller. The NVIDIA SHIELD controller can game for 40 hours before being charges. NVIDIA wanted you to have a proper game experience from the start, so once you get Android setup youll be able to play in minutes. 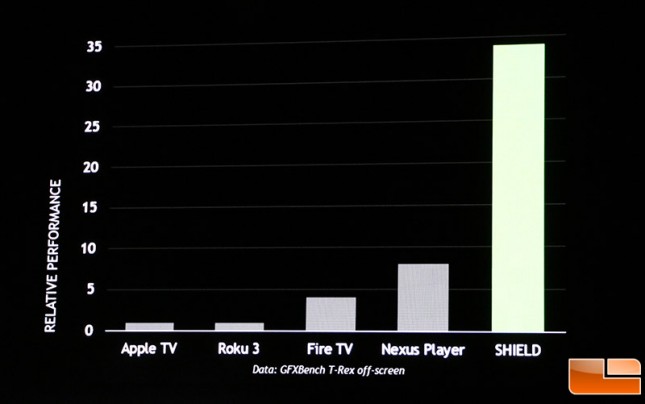 The NVIDIA SHIELD set top box is great, but you have a great gaming experience you need to have something great to connect it to. NVIDIA wants to make gaming accessible to the masses and do for gaming what Netflix did for videos by designing the ultimate hardware. The NVIDIA Tegra X1 (also known as the TX1) mobile superchip has 256 Maxwell GPU cores and it is the processor that powers the NVIDIA SHIELD. The NVIDIA SHIELD is 35 times more powerful than the Apple TV. NVIDIA wants to give several billion people around the world the ability to play games in the living room and the believe they have the right hardware to get that done with the NVIDIA TX1 processor. 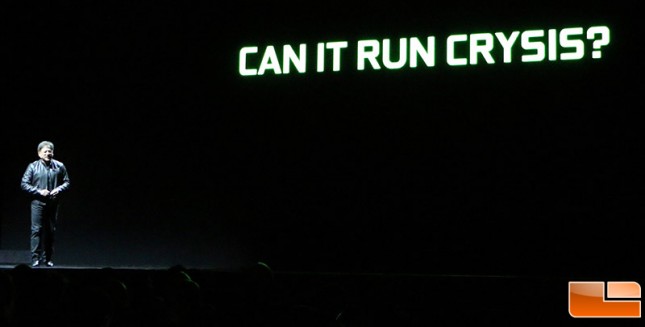 Can it run crisis?

Crytek was at the SHIELD launch event and stated that they were amazed by the power of the TX1 and tested it to see what it could do. They complied Crysis and quickly had it running on the SHIELD. They ported over the latest version of the CryENGINE and it worked. They then ported and ran Crysis 3 since they could expand the popular game title to a larger TV market and found that it worked. They were able to get the Crysis 3 multiplayer running at 30FPS. Can the SHIELD run Crysis? It can run Crysis 3! 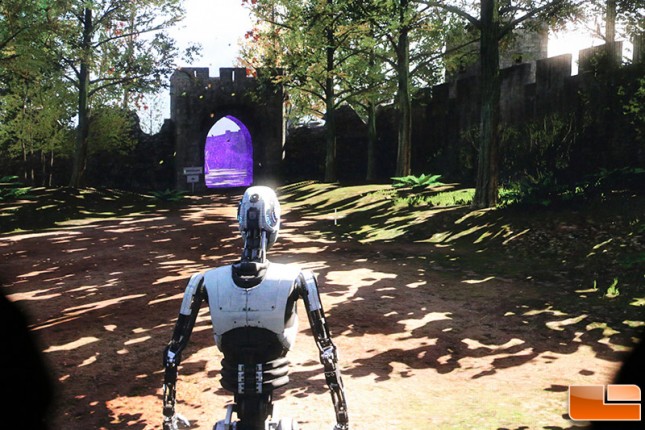 NVIDIA has a number of game developers show off their titles on the SHIELD console and all of the game titles looked great. Croteam has created a first person puzzle solver called The TALOS Principle and it looked excellent. We were told that the pixel quality between a PC and the NVIDIA SHIELD set top box is the same.

When the NVIDIA SHIELD launches NVIDIA plans on having 50 games available on the NVIDIA GRID gaming servers. By the end of 2015 NVIDIA hopes to have 100 game titles on GRID. Some major games titles being ported to SHIELD include; Crysis 3, Doom 3: BFG Edition, Resident Evil 5, The Talos Principle, Metal Gear Solid: Revengeance, Limbo, Borderlands 2, The Witcher III Wild Hunt and Borderlands: The Pre-Sequel.

The NVIDIA GRID Game-Streaming service will soon be coming out of its testing phase and will become a paid-for service. NVIDIA announced that there will be two NVIDIA GRID paid-for service levels. You’ll have the premium GRID Gaming service that allows you to game at 1080p 60 FPS instead with near instant game streaming for new titles. The basic subscription level will give you 720 30 FPS game service. So, the premium service allows you to buy and play in less than a minute at a higher stream quality. This means youll be able to buy titles quicker as youll have basically instant access whereas the basic subscription folks will have to wait for a bit.

After the presentation we were able to try out the NVIDIA SHIELD Android TV Console and it worked great considering NVIDIA has until May to make even more enhancements and improvements! We can’t wait to see what the final product is like at home in our living room!