NVIDIA president and CEO Jen-Hsun Huang moments ago walked onto the stage GTC 2017 to talk about the future of GPGPU computing. We are excited to hear him speak as yesterday, during companys Q1 earnings call he mentioned that his company was building inventory for a new product pending announcement at GTC and he also said he didn’t see AMD’s upcoming Radeon RX Vega series of cards as a threat. How can those comments not get the gamer base excited! 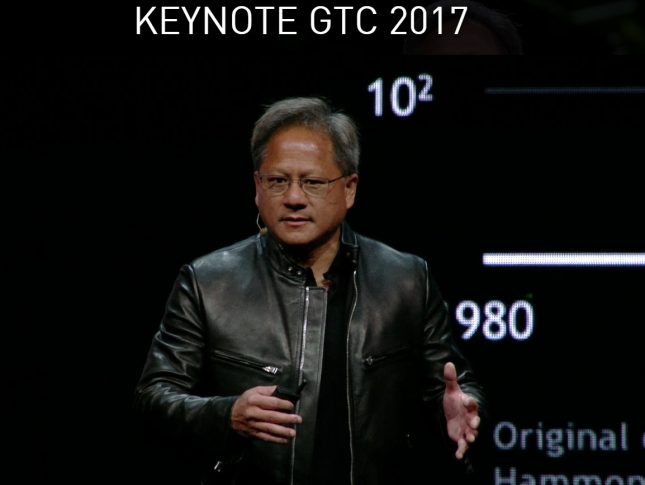 NVIDIA GPU accelerated performance is coming along very well and has been referred to as Moore’s law squared. GPU computing has grown by leaps and bounds over the past years as there are now over 511,000 GPU developers and that is an 11x increase over the past five years and CUDA is leading the way. In fact, the CUDA SDK was downloaded over 1 million times in 2016 alone.

The first demo of GDC 2017 was project holodeck where people from all around the world can come together and discuss whatever they like.

The demo for the show had Christian von Koenigsegg from Koenigsegg Automotive AB, the Swedish super car manufacturer and Jen-Hsun Huang taking a look at a new Koenigsegg car model together. Pretty impressive demo that shows photo realistic collaboration can take place from anywhere in the world. 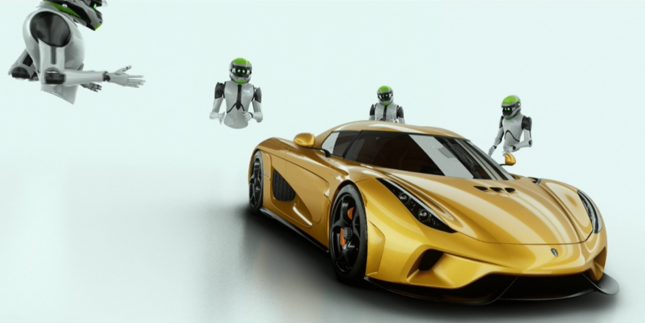 Jen-Hsun Huang then jumped into talking about machine learning and how NVIDIA is heavily involved in deep learning that is set to change many things in the world. Artificial Intelligence looks like it has emerged as being the most power source for new technology since AI took off in 2012. 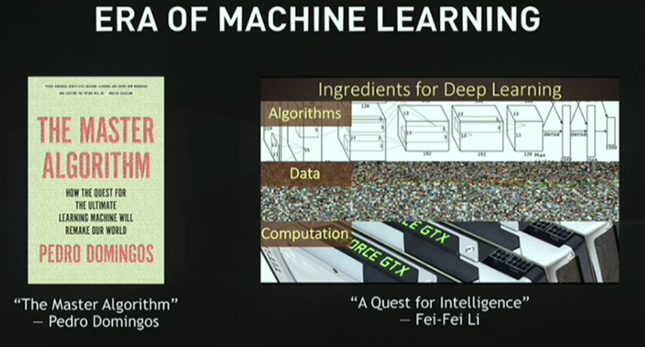 NVIDIA GPUs have been at the center of AI for around six years now and it keeps on going with unsupervised learning now a reality. The ‘big bang’ in modern AI has allowed for computers are now able to program computers, so we are entering an era of automation unlike anything the world has ever seen.

Jen-Hsun Huang showed a ray tracing demo where a system with Deep Learning capabilities was able to render a scene faster as the AI was able to anticipate what needed to be done based off what was already done and the surroundings in the image.

NVIDIA is committed to having the best platform (hardware & middleware) for high performance computing that is ready for the AI revolution.

Every year Jen-Hsun Huang gives us a little glimpse into the path they are taking with regards to graphics architecture. We already know Volta will be the successor to Pascal and more details were given on the $3 billion project. The NVIDIA Tesla V100 uses the Volta GPU! 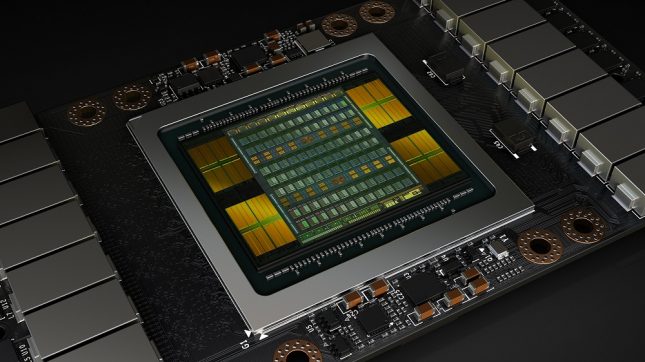 Volta will be built using TSMC’s new 12nm FinFET manufacturing process, which is a big deal as Pascal was built on the 16nm FinFET process. 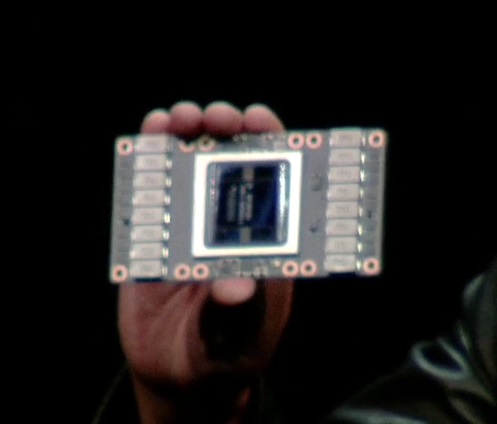 The Tesla V100 GPU has 21 billion transistors, 5,128 CUDA cores, 16GB of HBM2 memory running at 900 GB/s and has new Tensor cores. We are talking about 15 FP32 TFLOPS and 7.5 FP64 TFLOPS of compute power! NVIDIA says this is a 5x improvement over Pascal, the current-generation NVIDIA GPU architecture, in peak teraflops, and 15x over the Maxwell architecture, launched two years ago.

The new NVIDIA Tensor Cores are designed to speed AI workloads. Equipped with 640 Tensor Cores, V100 delivers 120 teraflops of deep learning performance, equivalent to the performance of 100 CPUs. The Volta Tensor Cores have 12x more throughout than the previous Pascal GPU architecture. 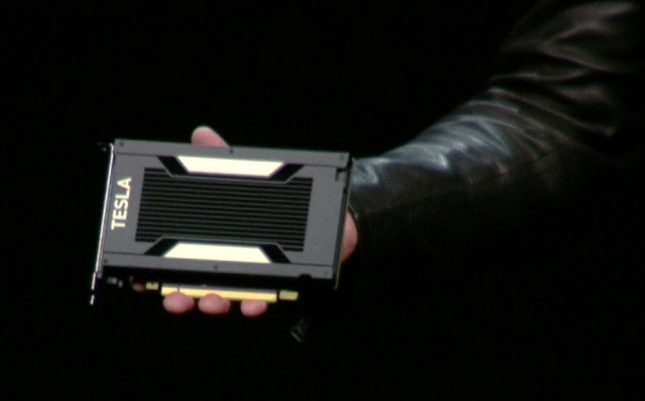 The NVIDIA Tesla V100 is a 150 Watt card that is full-height half-length and is a single-slot solution! We aren’t certain, but it looks like there is a single external PCIe power connector at the end of the card.

NVIDIA then showed off a demo of Kingsglaive: Final Fantasy XV that looked great. We’ll be keeping an eye on Volta as it looks like a great new architecture and we can’t wait for consumer desktop cards with Volta to hit the market! More details on the Volta GPU can be found here.

Jen-Hsun Huang then announced the NVIDIA DGX-1 for developers that replaces 400 regular servers with 8x Tesla V100 Volta GPU’s inside. Each NVIDIA DGX-1 runs $149,000 and will ship in Q3 2017! The price sounds high, but Jen-Hsun Huang said it could save companies millions and by that we are guessing production time, power savings and not having to buy, setup, and maintain 400 servers.

If you are a startup or don’t have $149,000 sitting around they have come up with the NVIDIA DGX Station! For $69,000 you can get a personal DGX Station with four Tesla V100 16GB GPUs in a water cooled super computer tower that will also be shipping in Q3 2017.

NVIDIA also didn’t forget about those looking for a cloud computing solution as they also have the NVIDIA HGX-1 coming in Q3 2017.

NVIDIA has lots of good stuff coming and we are very excited by what was announced at GTC 2017!