The NVIDIA GPU Technology Conference is being held this week and one of the most interesting parts of the show is seeing the keynote presentation by Jen-Hsun Huang by CEO & Co-Founder of NVIDIA. We’ve waited for this day to come for months as NVIDIA is expected to debut and demo their upcoming next-generation GPU architecture known as Pascal. 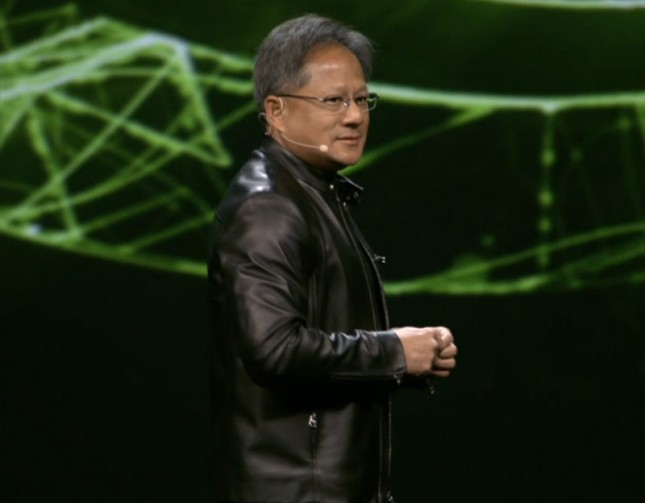 Just like we expected, Jen-Hsun Huang, took the stage in his trademark black leather jacket, dark pants and said that he was going to hit on five key points during his keynote today – A tool kit, VR, deep learning chip, deep learning box and deep learning in auto. Before he dove into the details he spoke about how the GPU accelerated computing market is healthy and that GTC attendance has more than doubled since the Kepler GPU launched at GTX 2012. There are also in 4x more CUDA developers!

The NVIDIA SDK software announcement is a number of updates for ComputeWorks, GameWorks, VRWorks, DesignWorks, DriveWorks and JetPack. One of the biggest announcements is that CUDA 8 is coming in June 2015 with cuDNN 5, nvGRAPH and IndeX plug-in for ParaView. NVIDIA also announced GIE (GPU Interface Engine) for the very first time that is coming in May 2016. The NVIDIA Jetson TX1 can do 24 images per second per Watt thanks to NVIDIA Jetpack with GIE. NVIDIA hopes that the SDK updates helps developers do what they need to get done.

Jen-Hsun Huang spoke about how Virtual Reality is the start of a new platform and that it is very easy to see how VR goes along with gaming. He noted that he is excited about how VR is going to change communication and tourism. He mentioned the Mount Everest VR demo by Sólfar that uses the equivalent of 14,000 iPhone 6 photos to recreate Mount Everest. There are 108 Billion pixels in this VR experience! We have actually strapped on the HTC Vive a couple times in person and we were impressed by the demo and agree that VR will be a game changer for games and experiences that would otherwise be out of reach.

Another demo that was shown was MARS 2030 by Fusion Studios. We haven’t had the chance to experience that demo yet, but the 2D footage looked pretty good.  MARS2030 is a reconstruction of eight square kilometers of Mars surface, from photos taken by NASA and others. 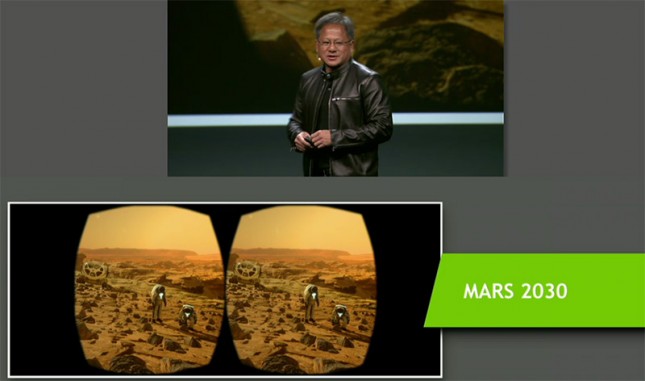 Next up was Steve Wozniak!

Steve Wozniak strapped on a VR headset and did the MARS2030 demo remotely during the keynote. He said the experience, powered by the NVIDIA GeForce GTX Titan desktop graphics card, was amazing, but also said that it was making him dizzy.

NVIDIA also announced IRAY VR and IRAY VR LITE for breakthrough photoreal VR. Jen-Hsun used a headmounted VR display that show off NVIDIA’s new office building in 3D that is in the process of being built. It will be 500,000 square feet for 2,500 employees and filled with natural light. It’s a collection of intersecting triangles that are white and off gray to ensure energy efficiency in all season. 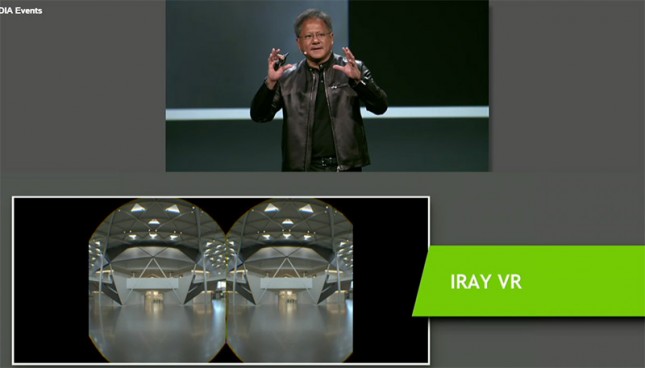 NVIDIA believes that this year will be a major year for AI and that deep learning is key. Jen-Hsun noted that Microsoft ImageNet has been able to beat a human at image recognition and that NVIDIA has gone all in with regards to deep learning.

Hyperscale is NVIDIA’s fastest growing market and it is seen as a $500 Billion opportunity over the next ten years. 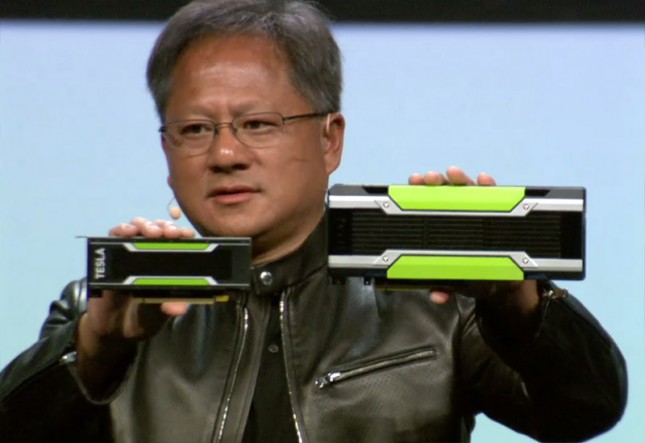 NVIDIA then showed a demo with Mike Houston that showed how to train AI with romantic-era images. 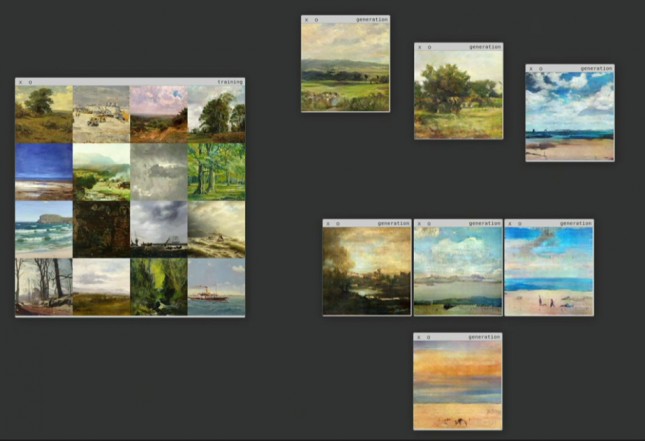 The most ambitions project ever undertaken by NVIDIA was the Pascal P100 GPU. It has 150 Billions transistors, 5.3 TeraFlops of FP64 compute power (0.6TF FP32, 21.2TF FP16) with an increased 12MB of shared memory shared files that has an aggregate. The P100 Pascal GPU also has 4MB of L2 Cache !

The NVIDIA Pascal P100 GPU is 600mm^2 in size, which is the largest chip ever made by NVIDIA. That is huge!!! Pascal is built using the 16nm FinFET manufacturing process and utilizes Chip-On-Wafer-On-Substrate with HBM2 memory. NVIDIA also had to use NVLink for 5x the aggregate speed of PCIe 3.0! NVIDIA then had to build new AI Algorithms to take advantage of the new P100 GPU. The NVIDIA Pascal P100 GPU is in volume production right now!

NVIDIA will have P100 servers coming for Q1 2017. What happens when you put eight Tesla P100 16GB GPUs in one box? You get the new NVIDIA DGX-1 deep learning supercomupter that is capable of 170 TeraFlops of CPU and GPU compute power. Other system specifications include Two Intel Xeons processors, 7TB in SSD capacity, Quad Infiniband, Dual 10GBe and more.

NVIDIA said that the NVIDIA DGX-1 is a datacenter in a box and that it has a 12x speed-up year-over year for those doing deep learning.

The NVIDIA DGX-1 will cost $129,000 each and orders will begin today with research universities getting top priority!