Jen-Hsun Huang just announced the GeForce GTX Titan Z graphics card! This triple-slot graphics card features 5,760 CUDA Cores, 12GB of memory and capable of 8 TeraFLOPS of compute power. This card has an MSRP of $2,999, which breaks down to be about 50 cents per CUDA core. At $3,000 it is safe to assume that this card isn’t targeted towards gamers, but we sure some people with deep pockets might be thinking otherwise right about now!

From what we can tel NVIDIA placed two Titan GK110 ‘Kepler’ GPUs, each with 2880 CUDA Cores, onto a single PCB to create this dual-GPU monster! It is clear by the price and size though that the NVIDIA GeForce GTX Titan Z is aimed totally at graphics professionals, not for gaming although you could game on it for sure.

Here is a closer look at the card. The GPU cooler design is very similar to that of the GeForce GTX 690 that had one central fan that blew air out both the front and the back of the graphics card. 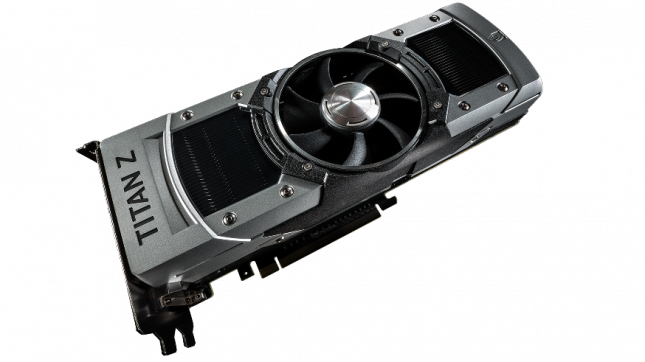