The NVIDIA GeForce 30-series consists of the GeForce RTX 3070, RTX 3080, and RTX 3090 graphics cards. The GeForce RTX 3080 will be available to purchase on September 17th and that will be followed up by the flagship GeFoce RTX 3090 cards on September 24th and finally the RTX 3070 on October 15th. Today we are able to share with you our results on the GeForce RTX 3080 Founders Edition card! So, let’s quickly cover what Ampere is for those that might now know and get straight to the benchmarks! 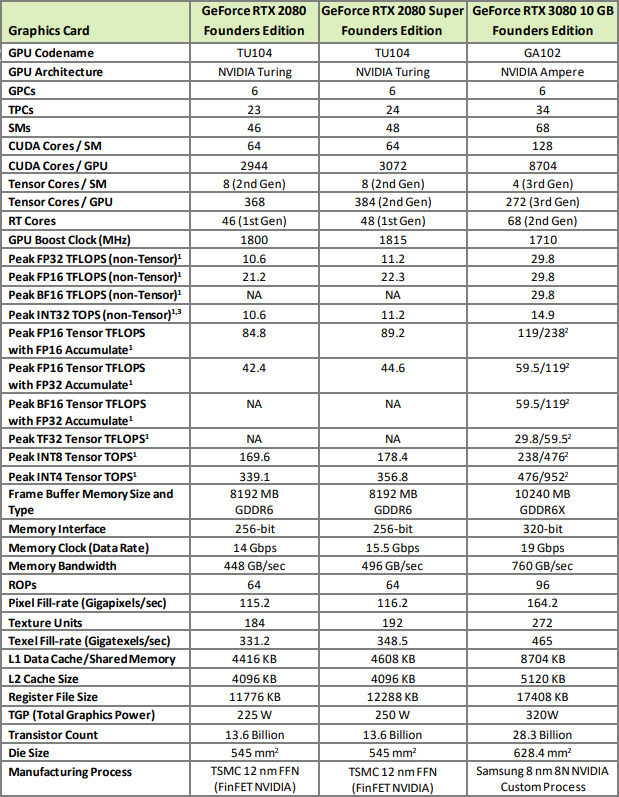 NVIDIA provided us with a very detailed specifications table that compared the new GeForce RTX 3080 10GB card to the GeForce RTX 2080 8GB and RTX 2080 SUPER 8GB cards that we included today. All of this was pretty much announced before today, but to quickly cover the highlights… The Geforce RTX 3080 uses the NVIDIA GA102 GPU that contains 28 billion transistors in a 628.4mm2 die. It is manufactured by Samsung on a custom 8nm process (8N). This is a big change as the previous Turing GPUs were made by TSMC on the 12nm FinFET process.

NVIDIA came up with a radical new design for the GPU cooler on the RTX 3080 Founders Edition and it looks really unique. The RTX 3080 FE has a 320W Total Graphics Power (TGP) and that is 95W more than the GeForce RTX 2080 FE. Adding an extra 100 Watts to the card meant that a new cooler was needed and NVIDIA went back to the drawing board and came up with this design that has two 80mm fans. It is considered a flow-through fan design on the rear that passed through the other side before being sucked back in and exhausted out of the chassis. 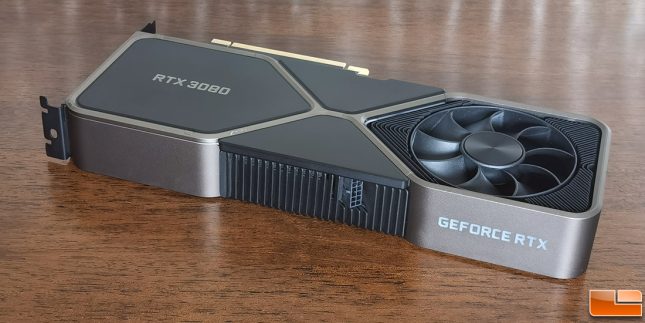 NVIDIA recommends a 750 Watt power supply for the 3080 FE and the card has one 12-pin power connector along the top edge. The GeForce logo has been moved to the end of the card and still features back-lighting.

Notice that there is not an NV-Link or SLI connector on the GeForce RTX 3080 Founders Edition. Multi-GPU support with solutions like NV-Link are not supported on the RTX 3080 series. NVIDIA has said that two GeForce RTX 3090 video cards can be linked together over NV-Link, so you’ll need to spend more to get that feature. 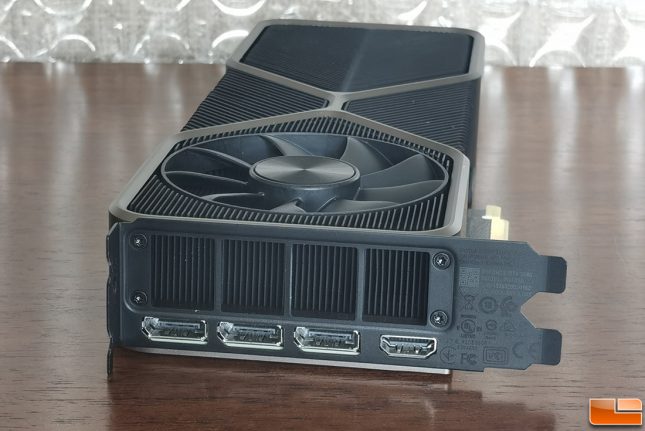 When it comes to display connections you’ll find three DisplayPort 1.4a with DSC 1.2a connectors and a single HDMI 2.1  with DSC 1.2a connector. HDMI 2.1 is a nice addition as it supports 8K60 and 4K120 with a single cable. NVIDIA says that Ampere will have no issue running two 8K displays at 60Hz with one cable per display. GeForce Experience captures up to 8K30, so NVIDIA will need to be updating that bit of software here soon. 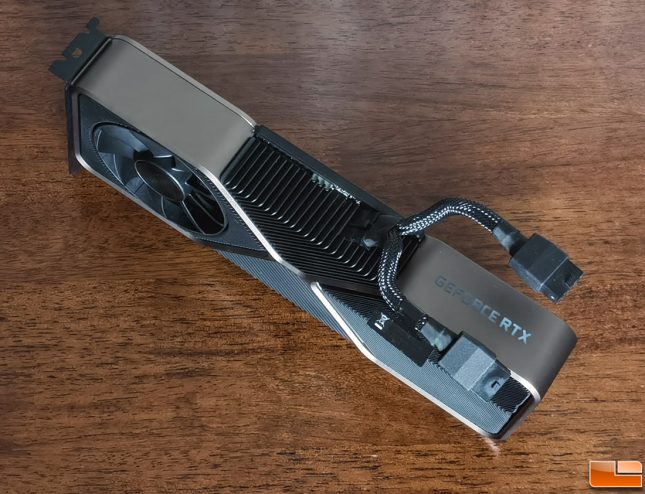 The mini 12-pin connector pairs with the included dual 8-pin PCIe adapter. NVIDIA came up with a new connector as they needed a smaller solution to keep their PCB size down. If you don’t like the looks of the included adapter you’ll be able to get other designs from EVGA, Corsair, CableMods, Seasonic and others in the near future. Some are free with the purchase of a PSU and others will be at an additional cost.

Let’s move along to the benchmarks to see how the RTX 3080 performs!