The NVIDIA GeForce Special event lived up to the hype as CEO Jensen Huang launched the GeForce RTX 30 series of graphics cards based on the Ampere GPU from his kitchen! It has been two years since NVIDIA launched Turing based cards, but that all changed in a super fast paced reveal that was over in under 40 minutes. That is all the time it took to launch the RTX 3070, 3080 and 3090 graphics cards! 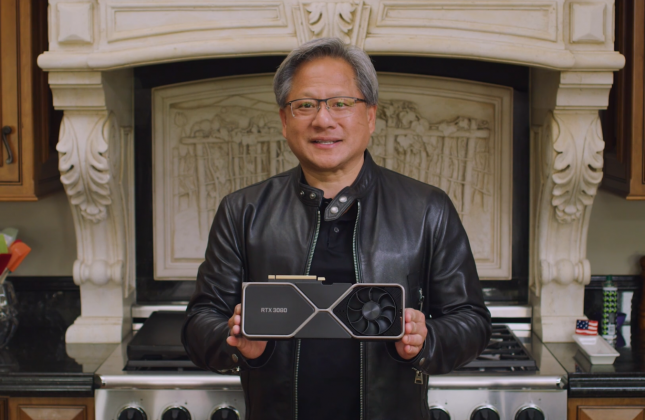 A new GPU architecture called Ampere powered the GeForce RTX 30 series cards and delivers 1.9x the power efficiency versus Turing-based GeForce RTX cards. NVIDIA noted during the presentation that Ampere has 28 billion transistors that are manufactured on Samsung’s 8nm process node (8N). NVIDIA also went with Micron GDDR6X memory on the RTX 3090 and RTX 3080 models, which just happens to be the world’s fastest memory (Sorry, HMB2) . NVIDIA’s use of GDDR6X memory will be at clocks at up to 19Gbps and that yields up to 760GB/s of memory bandwidth! This incredible memory bandwidth is possible as GDDR6X uses new 4-level PAM4 signaling with can transmit twice as much data per clock. 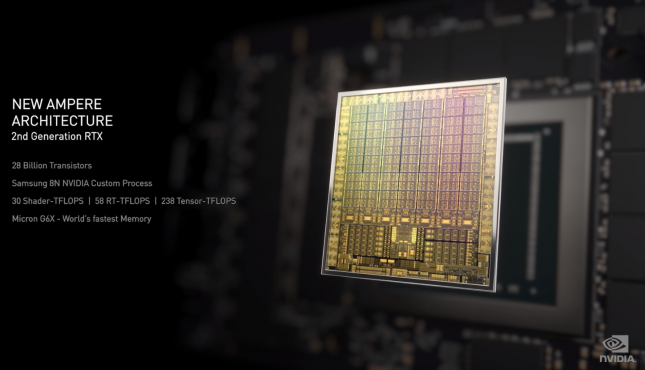 One of the biggest shocks of the event was actually the GeForce RTX 3070 8GB. NVIDIA considers this card to be in the “sweet spot” for many gamers and is it priced at $499. 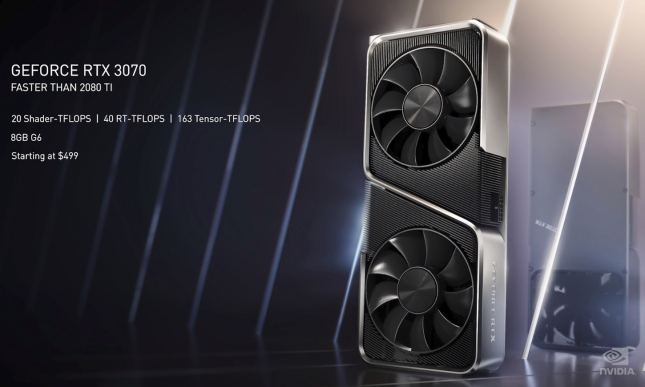 What is remarkable about this particular part is that NVIDA says it is faster than the GeForce RTX 2080 Ti and less than half the price. It will be interesting to see if the GeForce RTX 3070 is faster than the GeForce 2080 Ti on all game titles or just the game titles that have RTX features enabled. Benchmarks are always key and we can’t wait to actually see how the new Ampere cards perform. Many were expecting NVIDIA to raise prices, so one of the most interesting bits of information from the reveal was that prices are not going up! 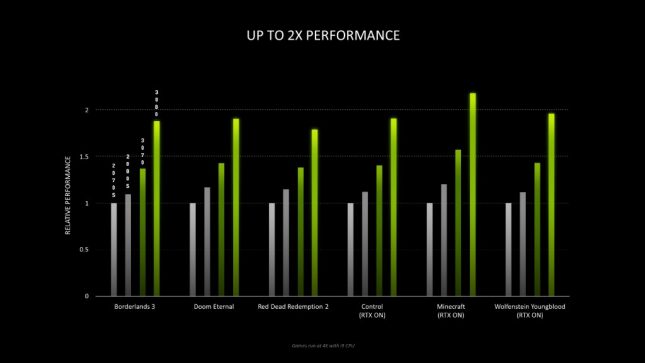 NVIDIA didn’t show off too many performance slides for Ampere, but here are the ones that we ran across today. 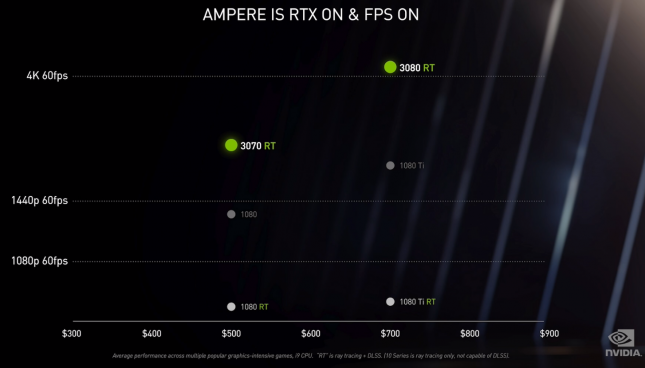 The 2nd Generation RT cores appear to really be helping ray tracing performance you can see from the chart bellow. The NVIDIA GeForce RTX 3080 delivers 30 TFLOPS of shader performance, which is up from just 11 TFLOPS on the last generation Turing cards. The RT core performance is up to 58 RT-TFLOPS from 34 RT-TFLOPS with Turing. The Tensor cores on Ampere have 238 TFLOPS, which absolutly smashes the 89 TFLOPS of Turing. 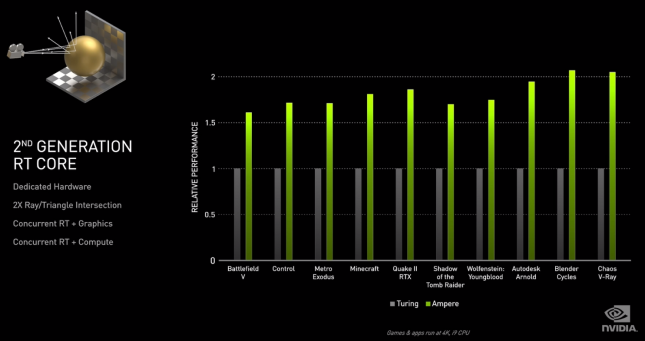 All this performance will enable NVIDIA to bring to market new features like NVIDIA Broadcast that removes audio noise, introduces webcam auto frame and virtual background effects. the NVIDIA RTX Voice beta application was one of the most impressive features that we have seen added to graphics cards in years, so it is nice to see NVIDIA sticking with it and using that technology to make gaming better. 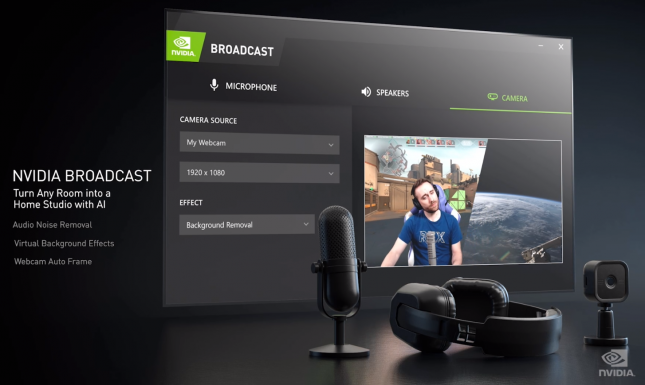 The NVIDIA GeForce RTX 3090 was called the BFGPU and is the first consumer graphics card capable of playing games at 60fps in 8K. The innovative new GPU cooler is said to be up to 10x quieter and up to 30C degrees cooler. If you have $1,499 sitting around and want the best NVIDIA has to offer the GeForce RTX 3090 is as good as it is going to get. This card appears to be a ‘console killer’ and will likely be the card for both AMD and Intel to beat in the years ahead. It is the Big Ferocious GPU (BFGPU) after all. 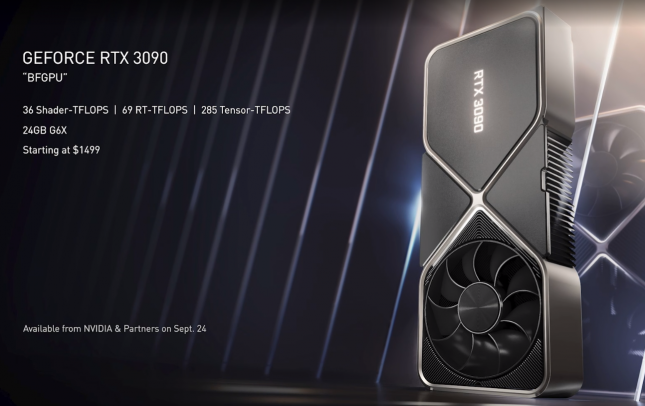 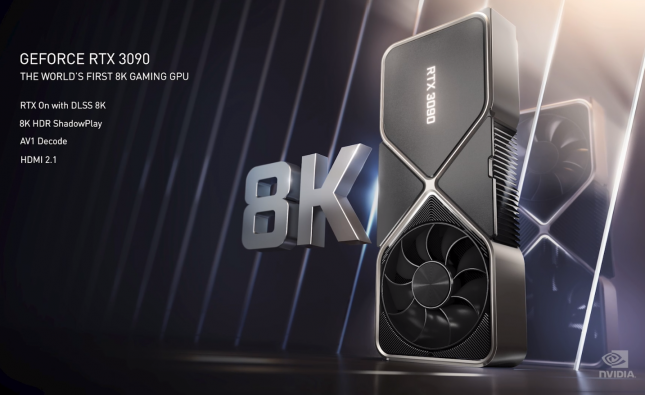 So, the new flagship graphics cards for gamers will be the GeForce RTX 3080 and launches on September 17th, 2020 for $699. the landscape for desktop gaming graphics cards has dramatically changed and we can’t wait to see what all the board partners will be offering. 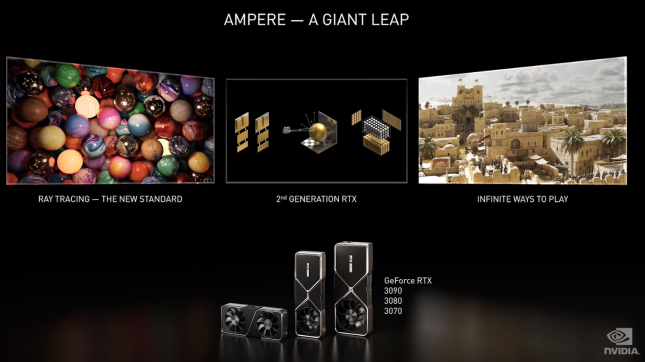 You can find the entire launch presentation below and we highly advise watching it all!