The NVIDIA GeForce GTX 960 graphics card is making headlines daily with more leaks than we can keep up with. Over the past couple days we have seen what appears to be the official specifications slip out along with some benchmark numbers. Let’s jump right in and look at the alleged official NVIDIA specifications that were leaked by VideoCardz. 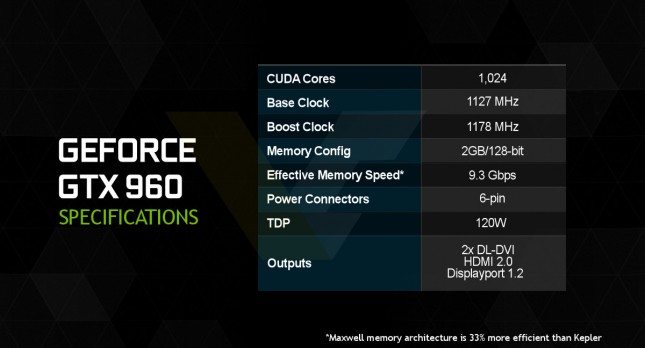 The GeForce GTX 960 is based on NVIDIA’s GM206 ‘Maxwell’ 28nm GPU. The GM206 is basically half of a GM204 GPU used on the GeForce GTX 980, so its specs are basically halved. That means you have 1024 CUDA cores and 2 GB of GDDR5 memory on a 128-bit wide bus interface. This might seem narrow to most gamers out there, but NVIDIA will be using lossless texture compression technology to improve bandwidth utilization. That means that there is now an effective memory speed specification and on the GeForce GT 960 that is 9.3 Gbps. We suspect that the clock speed of the memory is still 7.0 Gbps, so NVIDIA is able to get a 2.3 Gbps speed boost from the compression algorithm. The leaked slide shows the base clock as being 1127MHz with the boost clock reaching 1178MHz. The TDP of the card is a paltry 120 Watts and all the leaked images of the GTX 960 show just one 6-pin PCIe power connector being needed. The NVIDIA GeForce GTX 960 reference card will feature DisplayPort 1.2, HDMI 2.0 and a pair of Dual-Link DVI video outputs. 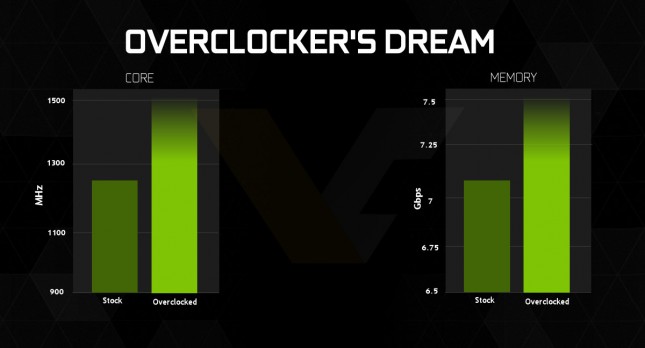 Another leaked slide shows the GeForce GTX 960 being called an overclockers dream. It looks like the boost clocks of the card can reach about 1275MHz in the right environment, but the card can easily be overclocked up to 1500 MHz on the core.  The same holds true for the memory that looks to be running just above 7.0 Gbps at stock speeds and then at 7.5 Gbps or higher when overclocked. NVIDIA is showing both the effective and traditional bandwidth of the memory in the slide deck, which might end up confusing some people. 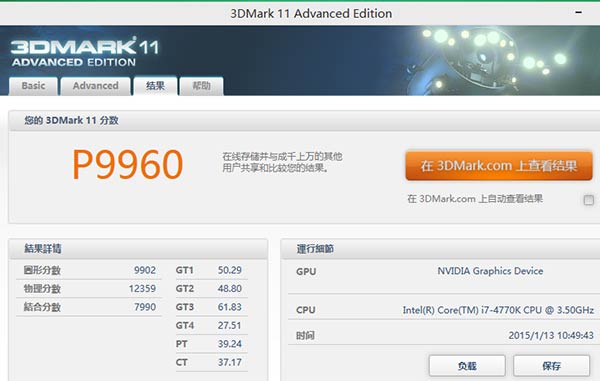 Benchmark numbers come courtesy of a Chinese site called PCEVA. A forum member called RoyalK posted some screenshots showing 3DMark 11 and 3DMark benchmark results, which are said to be from a GeForce GTX 960. His system consisted of an Intel Core i7-4770K processor and obviously the unannounced GeForce GTX 960 that should be under an NDA. The 3Dmark 11 score was P9960, which puts the GeForce GTX 960 against the AMD Radeon R9 285 or there about. 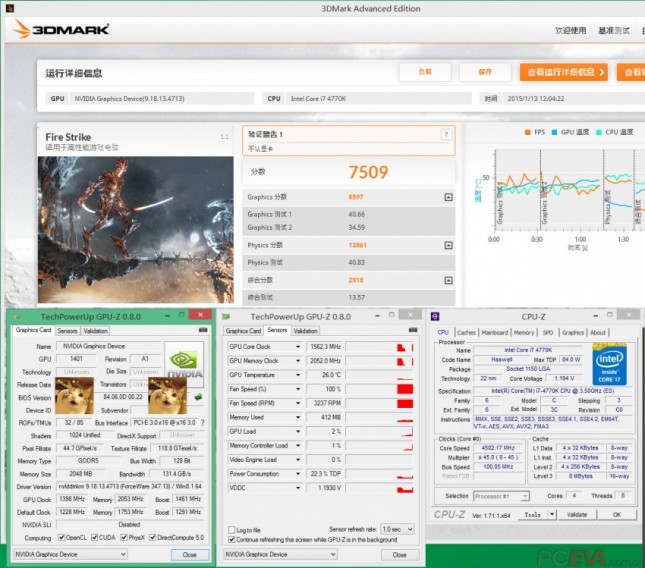 In 3DMark Firestrike the GeForce GTX 960 scored 7509, but noticed that the system and video card was overclocked in this benchmark run. GPU-Z 0.8.0 showed that the card was hitting 1562MHz on the GPU and 2052MHz on the memory (effective clock speed of 8208MHz). NVIDIA GeForce 347.13 drivers were used. 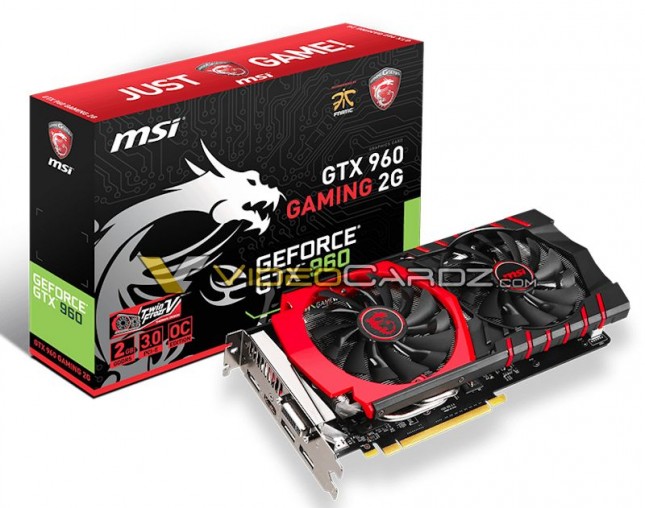 The expected release date of the NVIDIA GeForce GTX 960 has been long rumored as being January 22nd, 2015.