The EVGA GeForce GTX 780 Ti Superclocked card was impressive and we found it to have a higher average frame rate in six of the seven game titles that we tested today at 3840 x 2160 on our 4K display. This is good news as the EVGA GeForce GTX 780 Ti SC runs $729.99 and that makes it 33% more than the AMD Radeon R9 290X at $549.99. The bad news is that there wasn’t a massive performance difference between the two cards. The largest performance gap that we noted with the average scores was ~13% and that was in both Battlefield 3 and Bioshock Infinite. So, the NVIDIA GeForce GTX 780 Ti gives you better performance in most of the benchmarks that we ran (7-13% where it leads), but you are paying an extra 33% or $180 for that performance bump.

The one thing that is disconcerting with the EVGA GeForce GTX 780 Ti is that is ran out of frame buffer in Far Cry 3 with Ultra image quality settings since it only has 3GB of memory. The quick fix to this is to reduce the image quality settings and the game won’t freeze up, but all gamers want to get the most eye candy that they can. Who wants to buy a 4K monitor and a flagship graphics card just to have to turn down the IQ settings! 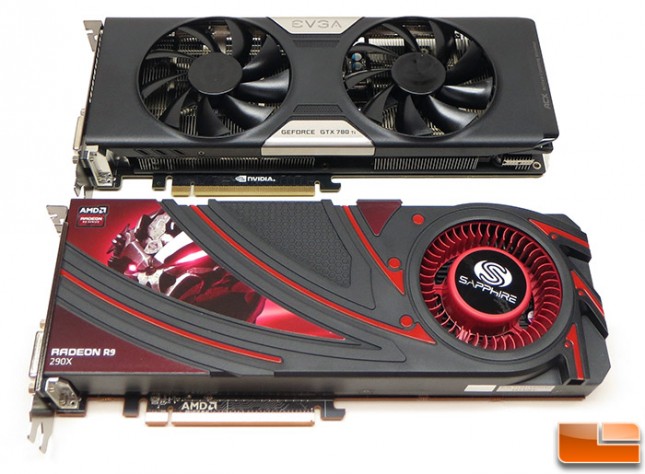 What card should you buy? We still have mixed feelings about this as the AMD Radeon R9 290X 4GB is the clear price versus performance winner at 4K. On the other hand the NVIDIA GeForce GTX 780 Ti 3GB  led more times than not, but we just can’t get over the 3GB of memory filling up in Far Cry 3 to say that it the must have card for 4K gaming.  We aren’t sure how much frame buffer is going to be used by games coming out in 2014, so how big of a deal is it really? If you are willing to lower the image quality where needed and don’t have any budget concerns the GeForce GTX 780 Ti looks like it would be the way to go.  If you are budget conscious and don’t want to pay a third more for a 13% performance boost in the game titles then stick with the AMD Radeon R9 290X. The AMD Radeon R9 290X shown here was a retail card with stock clock speeds and the reference cooler. We can only imagine how this card will perform once the AIB’s release their custom designed cards that have higher clock speeds and better GPU coolers. We’ll have to save that article for another day as they have not come to market yet.

Legit Bottom Line: The Sapphire Radeon R9 290X and EVGA GeForce GTX 780 Ti are both capable of gaming at 4K, but it really comes down to what you want to pay and your brand loyalty.