The NVIDIA GeForce GeForce GTX 1650 graphics card that was launched last April is getting a little upgrade on its one year anniversary. NVIDIA has produced a version of the GeForce GTX 1650 that uses newer and faster GDDR6 memory instead of the GDDR5 memory it originally launched with in 2019. 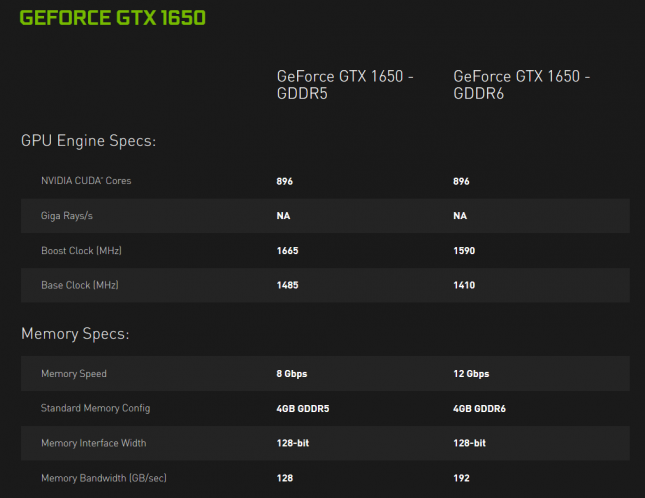 Legit Reviews reached out to NVIDIA this morning and asked why the core clocked needed to be lowered and we were told that it was to keep the reference cards TDP the same. The GeForce GTX 1650 has a 75W TDP and no supplementary power connectors. NVIDIA was not willing to get into the details on the power requirements for the memory since they have multiple memory suppliers.

The good news is that most of the custom cards from board partners do have supplementary power connectors and the clock speeds are most impressive. The just announced Gigabyte GeForce GTX 1650 D6 WindForce OC 4G (product page) has a boost clock of 1710 MHz, which is 120 MHz higher than the NVIDIA reference card! Since the card has designed with a 6-pin PCIe power connector and a more robust power delivery system, it can run at a higher TDP and thus the higher core clock speeds!

Newegg already has a couple of the new GDDR6 models up with pricing at $159.99. Expect to see a number of GeForce GTX 1650 cards with GDDR6 memory with healthy factory overclocks coming from all the Add-In-Board (AIB) partners later this month!