PC gaming has enjoyed one of its most exciting and prolific years in 2007 thanks to the release of Microsoft Windows Vista and DirectX 10.   As we approach the holiday season, some of the most anticipated titles of the year will be released: Crysis, Hellgate London, Call of Duty 4 and Unreal Tournament 3, to name just a few. This means it is highly likely that more gamers will be making the move to DirectX 10 and needing for a mainstream graphics card to take advantage of the new eye candy these games are offering. With DirectX 10 game titles like BioShock and World in Conflict already out the market knows just how good these games look, but also how tough they are on modern systems. To prepare gamers for these ultra-intense, next-generation titles, NVIDIA today introduced a new graphics card that they hope will define the $199-$259 GPU segment: the GeForce 8800 GT. 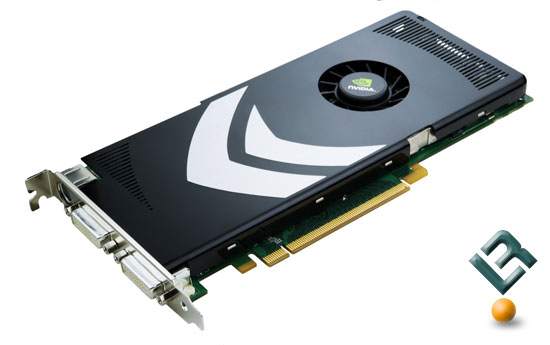 The GeForce 8800 GT brings together the enormous shading power of the GeForce 8800 with the enhanced texturing and video features of the GeForce 8600. Key features include 112 streaming processors operating at 1.5GHz, 512MB of video memory, a 256-bit memory interface, PCI Express 2.0, NVIDIA SLI, and the second generation NVIDIA PureVideo engine with full acceleration and post processing for HD DVD and Blu-ray. 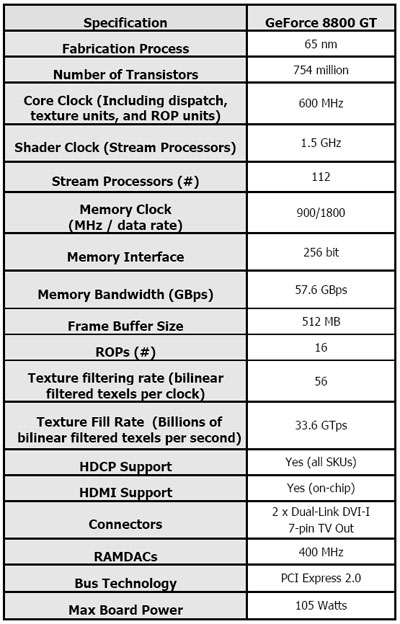 It should be noted that the GeForce 8800 GT is the world’s first consumer GPU to support PCI Express 2.0. PCI Express 2.0 doubles the bandwidth available to the graphics card to 8GBps. in each direction, providing a total of 16GBps. of total memory bandwidth. PCI Express 2.0 is backwards compatible with all existing PCI Express 1.0 and 1.1 systems, supporting both 2.5 Gbits/s and 5 Gbit/s signaling rates. The original PCI Express specification defines graphics cards with up to 75 watts of power, but it seems that with PCIe 2.0 PCI-SIG is going to extend the existing 150Wwatt power supply rating for high-end graphics devices to 225/300watts. PCI Express 2.0 has obviously been designed with the future in mind!

The GeForce 8800 GT GPU is manufactured using 65nm technology, employing a total of 754 million transistors, making it the most complex GPU ever created. Featuring 112 shader processors (seven groups of sixteen) operating at 1.5GHz, the GPU pushes an astounding 336 Megaflops. Each stream processor is capable of being dynamically allocated to vertex, pixel and geometry operations for the utmost efficiency in GPU resource allocation, and maximum flexibility in load balancing shader programs. 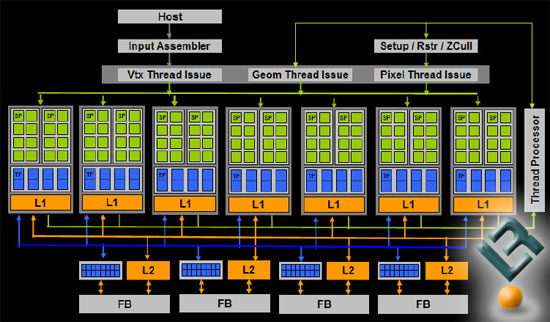 Working alongside the shader processors are 56 texturing processors (eight texture processors per shader block) each capable of one addressing and filtering operation per clock. The standard clocked GeForce 8800 GT has a peak bilinear fillrate of 33.6 gigatexels!

Let’s take a closer look at the reference card.