It’s no big secret that ATI is launching the Radeon HD 3870 graphics card at $220 and the budget friendly Radeon HD 3850 graphics card that will retail for $179. There have been so many leaks before the launch of the Radeon HD 3800 series it’s no big suprise that the people at NVIDIA are counter attacking just the day before the launch.  On Monday Legit Reviews published our performance review on the GeForce 8800 GT, which was a fantastic card for those with more than $250 to spend on a single video card.  With the ATI Radeon 3850 being offered in the $179.99 price range there was no real competition as the Radeon 3850 will most certainly destroy a GeForce 8600 GT and 8600 GTS.  NVIDIA does have a solution for those looking to spend under $200 and it is the 256MB version of the GeForce 8800 GT. You’ll have to wait till the end of the month to see the real reviews on this new offering from NVIDIA as they haven’t seeded the media with cards yet. As for now you’ll just have to live with what NVIDIA Public Relations has put together and sent out to reviewers.

A: The GeForce 8800 GT 256 MB has amazing performance for its price. We have attached a slide that includes benchmark results we ran in-house on many popular gaming titles. 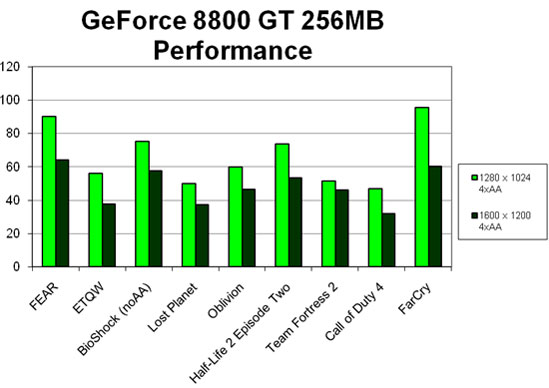 A: Partners that will be offering GeForce 8800 GT 256 MB board include Asus, BFG, EVGA, Leadtek, PNY, XFX and others. 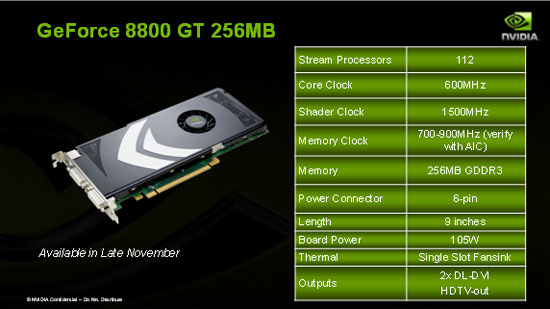 Q:  What are developers saying about DirectX 10.1?

A:  We do not expect most developers to move to DirectX 10.1.  Here is a statement from both Crytek and Microsoft  on the subject:

“We pride ourselves on being the first to adopt any important new technology that can improve our games so you would expect us to get with DX10.1 right away but we’ve looked at it and there’s just nothing in it important enough to make it needed.  So we have no plans to use it at all, not even in the future.”  – Cevat Yerli, Crytek CEO

“DX10.1 is an incremental update that won’t affect any games or gamers in the near future.”  – Kevin Unangst, Sr. Global Director for Microsoft Games for Windows

To sum this information up in a nutshell, NVIDIA just blasted DirectX 10.1 by saying it’s no big deal and is going to be releasing a 256MB version of the GeForce 8800 GT at the $179.99 to $199.99 price range later this month. The NVIDIA GeForce 8800 GT 512MB was supposed to be $249.99, but good luck finding one as all are sold out or selling for well more than that amount. If NVIDIA wants to compete at the $179.99 price point they need to get tens of thousands of cards on the market before the holiday season and not just a couple thousand. Time will tell on pricing and availability, but consumers want something they can walk in and buy at the MSRP or below.