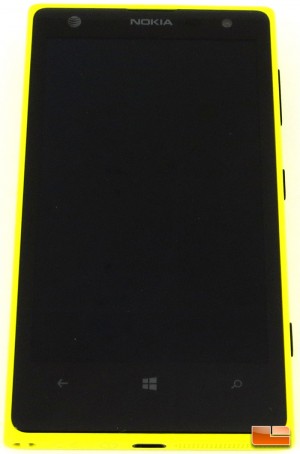 It doesn’t seem that long ago that having a cell phone with a camera was only for those who had an excess of money laying around. It was more of a status symbol for those who wanted ‘1-up’ their friends and family. A few short years later, a camera phone was pretty much a standard. They’ve slowly replaced stand alone digital cameras at family gatherings, and events across the board. The traditional cell phone camera doesn’t really compare to a quality digital camera, but Nokia is looking to close the gap with their latest Smart phone. The Nokia Lumia 1020 smart phone sets itself apart from the competition with a 41 Megapixel camera! If you’re in the market for the Nokia Lumia 1020, it hit the streets with a price tag of only $199.99 with a two year contract from AT&T.

The above video from Nokia is a little dry, but it does give a great overview of the camera features of the Nokia Lumia 1020.

Within the Nokia Lumia 1020 there is a Qualcomm 1.5GHz dual core Snapdragon processor. The dual core Snapdragon is getting a little long in the tooth, and many phones are utilizing the quad-core version, but it still gets the job done. The Nokia Lumia 1020 is no small phone, it will easily fit the largest of hands and those with smaller hands may struggle to use it with only one hand. It measures 5.1″ tall by 2.8″ across and features a 4.5″ screen. Despite the large screen size Nokia went with a resolution of 1280×768, it seems a little low compared to many of the latest phones that are 1920×1080 though it certainly looks good. The display technology on the Nokia Lumia 1020 includes ClearBlack and AMOLED and Super sensitive touch – touch screen technology.

According to Nokia, the Lumia 1020 has a battery standby time of up to 16 days, a maximum talk time (2G) of 8.2 hours, (3G)12.5 hours, 53 hours of music playback, 6.8 hours of video playback, and 6.7 hours of Wi-Fi network browsing time. To accomplish all of these times the Nokia Lumia 1020 has a BV-5Xw battery that is rated for 2000.0mAh at 3.8 Volts. Unfortunately the battery isn’t removable so if it goes bad you’re up the proverbial creek without a paddle. On the up side though the Lumia 1020 is backed by a 12 month warranty, just in case.

The top edge of the Nokia Lumia 1020 features a 3.5mm audio jack for a hands free device as well as the door for the micro SIM card. 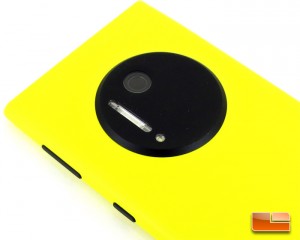 The Nokia Lumia 1020 key feature is easily the 41 Megapixel camera. The lens on the main camera for the Lumia 1020 is a Carl Zeiss Tessar lens. To the left of the camera is a Xenon flash with an operating range of 4.0 meters. 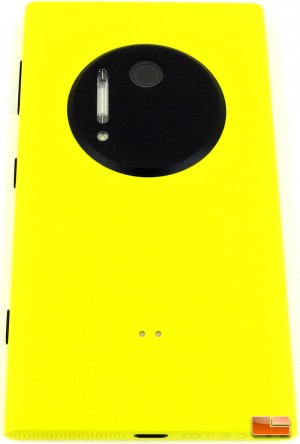 The back of the Nokia Lumia 1020 is a little plain from this view. Towards the top of the smartphone we can see the camera and flash.

Along the right side of the Nokia Lumia 1020 there are a series of three buttons. The long one on the left is the volume, so technically it’s two buttons. The center button is the power button which also serves as the screen lock button. The left button is the camera button. The camera can be activated while the phone is being used, or directly from the locked screen with this button. Looking at the profile, the camera on the Nokia Lumia 1020 stick out of the phone just a bit.

Setting the phone down on the back shows the angle the Lumia 1020 sits on and just how far the camera protrudes out of the back of the phone.

The bottom of the Nokia Lumia 1020 has the standard USB Micro-USB-B connector, speaker, and a spot to thread a lanyard through.