NVIDIA today announced two new GeForce RTX SUPER GPUs to coincide with the launch of the Intel 10th Gen Comet Lake-H movible processors to take gaming laptops to the next level. The two new models are the GeForce RTX 2070 Super and the RTX 2080 Super. Both of these new discrete mobile GPU solutions also support the latest in NVIDIA Max-Q Technologies.

NVIDIA has seen a sharp rise in number of hours played played since the Corona Virus outbreak. Since the global pandemic began they noted an increase of 50% more hours per gamer, which is an enormous jump up. So, now in particular gaming laptops are more more relevant than ever with, with the current work from home and school situation.

This launch is record breaking for NVIDIA as they will be inside over 100 laptops that will begin entering the market today at a wide variety of price points.

The starting price for a laptop with the GeForce GTX 1650 can now be found for the first time ever at $699 in the market. Moving up from there you’ll be able to find laptops with the GeForce RTX 2060 at the $999 and the GeForce RTX 2070 for around $1199. NVIDIA believes that these are really attractive price points that have never been been possible before. They believe the new $999 price point for laptops with the RTX 2060 is going to allow many more gamers to get all the features that RTX brings to the gaming laptop market. 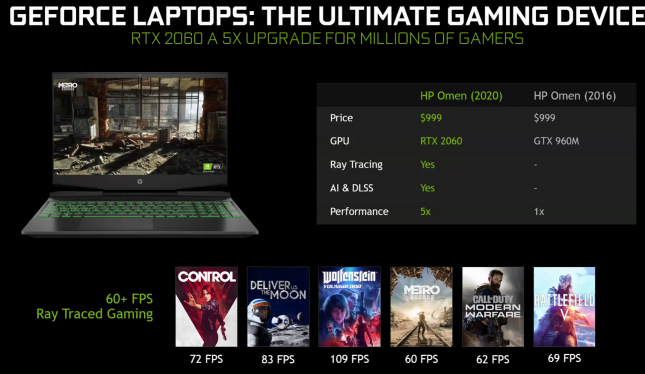 NVIDIA says that the typical refresh cycle for a gaming laptop is about four years. A four year old laptop at the $999 price point would have been something like the HP Omen from 2016 that came with the GeForce GTX 960M. If you look at the kind of performance upgrade that you get from that generation gaming laptop to the new HP Omen with the GeForce RTX 2060 you’ll be impressed. NVIDIA claims you should see about a 5x performance increase on traditional games and that’s before DLSS is enabled. This is a massive step up for the millions of gamers that will be upgrading their laptop this year.

NVIDIA also says you can comfortably play any of the latest Ray Traced Gaming titles at 60 FPS or above on any of the gaming laptops running the RTX 2060 graphics solution! 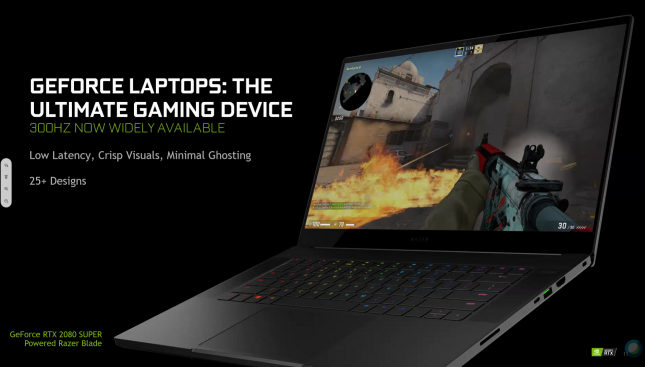 On the display side, NVIDIA now have support for every single RTX laptop coming to market is going to support a high refresh rate display. So if you fall in love with a laptop, you’ll be able to find it with at least a 144Hz panel. For those that want more than 144Hz you are in look as for the first time ever, you’re going to find 300Hz available widely on gaming laptops!

NVIDIA says that there are over 25 different designs coming to market that are going to be able to support 300Hz displays! The pictured example in the press deck was the new Razer Blade that pairs the new GeForce RTX 2080 SUPER with a 300 Hz display. 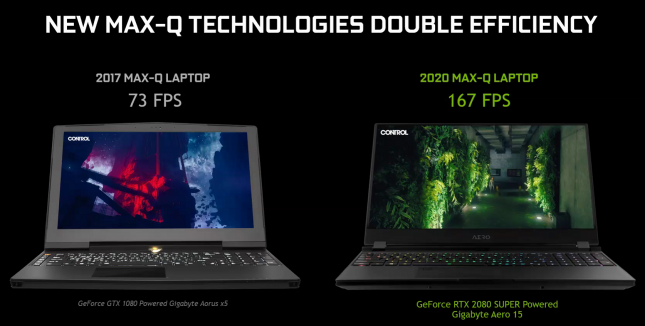 On the NVIDIA Max-Q Technology front, there are a number of new technologies that are going to be available on Max-Q laptops starting in 2020. If you compare a new Max-Q laptop from 2020 to what NVIDIA launched just a couple of years ago, you’re going to see over twice the efficiency in these new in these new laptops.

The slide above shows the the key technologies behind Max-Q technology. Dynamic boost is a key feature that allows NVIDIA to share power between the GPU and CPU are able to shift power to where it’s needed the most. This delivers increase performance, without requiring any more thermals of the laptop which significantly boosts efficiency. 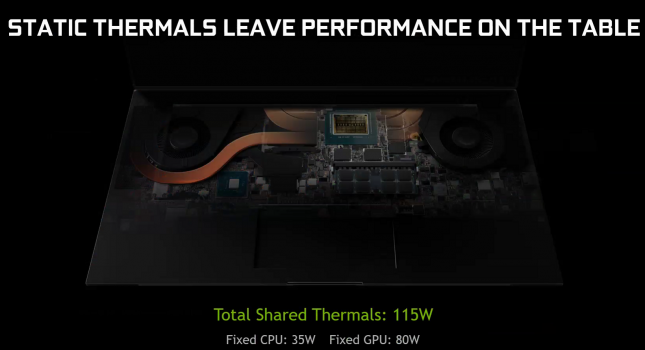 NVIDIA also used low voltage GDDR6 memory that enables ultra efficient operation in the GPU and GPU memory subsystem. Using advanced Optimus laptops for the first time ever means that you can have G-sync with great battery life. Regulators are about 85% efficient, so NVIDIA went with next generation regulators to reduce power loss there. Lastly, DLSS can be used to boost performance. 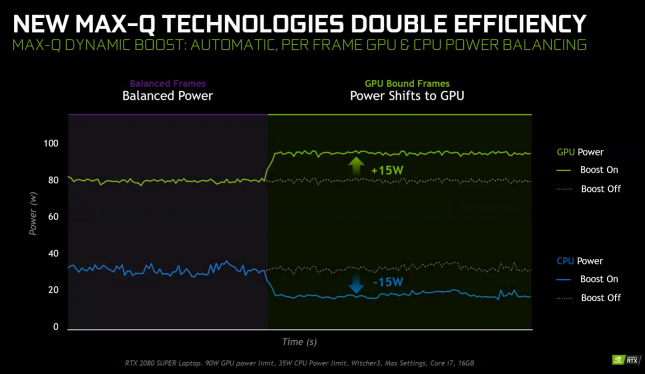 Max-Q Dynamic boost is all about being as efficient as possible and allows some of the avaiable system power to be transferred from the CPU to the GPU if it can. If a laptop maker fully implements dynamic boost there would be a 15 Watt power transfer between a typical 45W TDP class processor and a GPU. 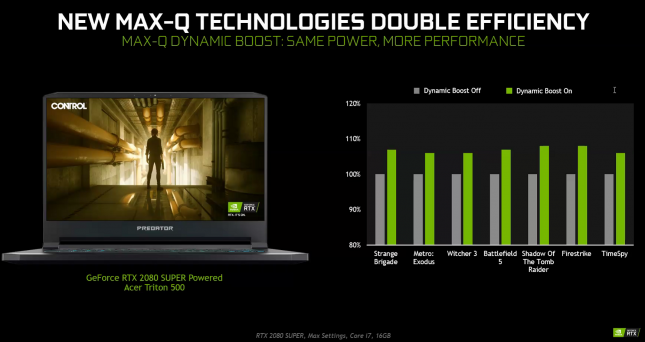 The slide above shows what happens to gaming performance on an Acer Triton 500 gaming laptop with the GeForce RTX 2080 SUPER when dynamic boost is enabled and disabled. There is a rather significant performance increase to be had across a wide variety of game titles. 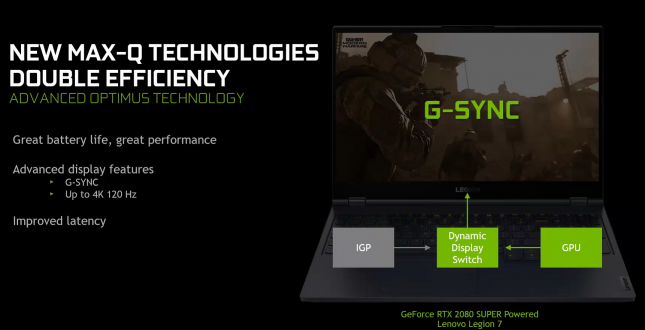 The final thing we wanted to talk about a bit more was advanced optimus technology. This is the first time optimus technology has been available on gaming laptops with G-Sync panels. NVIDIA has never been able to offer this before as G-SYNC requires the GPU to be directly connected to the display to handle all the kind of advanced signaling that the G-Sync module needs to do in order to provide all the different features utilized. So with advanced optimus the goal of it is to turn the discrete GPU off when it’s not needed. And by doing that you save power in this help battery life.

2020 is going to be a great year for gaming laptops!