Since most of the Earth’s surface is made of water, typically, if an asteroid survives entry through the Earth’s atmosphere, it winds up hitting the water. However, sometimes asteroids do impact land, and one of the best examples of this is a 50,000-year-old crater in northern Arizona. The meteor crater is called the Barringer Meteor Crater and is located between Flagstaff and Winslow in northern Arizona.

The image below was taken by the Operational Land Imager on Landsat 8 on May 16, 2021. While the crater is ancient by human standards at 50,000 years old, it’s relatively young on a geological scale. The crater has been studied extensively by scientists to learn how cratering processes work on Earth and on other planets in the solar system. 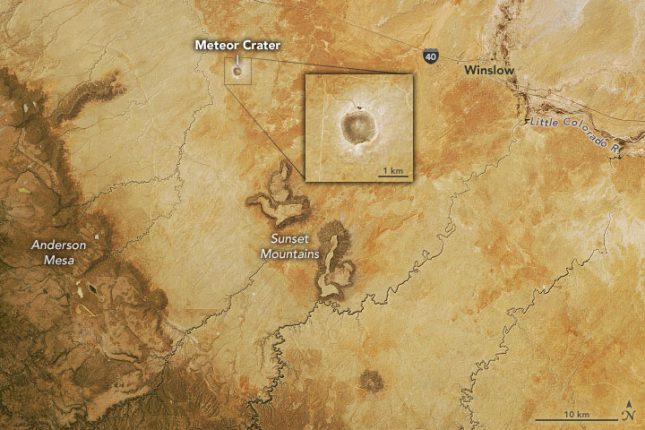 Scientists note that a similar size impact event today would generate forces significant enough to destroy a city the size of Kansas City. The Meteor Crater measures .75 miles across and about 600 feet deep. While the asteroid’s size that caused the crater is unknown, estimates have it in the 100 to 170 feet diameter.

When the asteroid hit the earth, the land looked very different from how it looks today. There were no humans in North America when the asteroid hit, and the terrain was a forest of rolling hills. The area was likely inhabited by mammoths, mastodons, and giant ground sloths. The area is a desert today.