NASA has confirmed that crews have begun assembling the Europa Clipper spacecraft, moving the mission into the final phase before launch. The spacecraft is meant to orbit Europa in 2024, an ice-covered moon of Jupiter.

Assembly is underway at the Jet Propulsion Laboratory in California. Various engineering components and scientific instruments are being sent to the JPL from the US and Europe. NASA says before the end of 2022, most of the flight hardware and the nine science instruments will be complete. 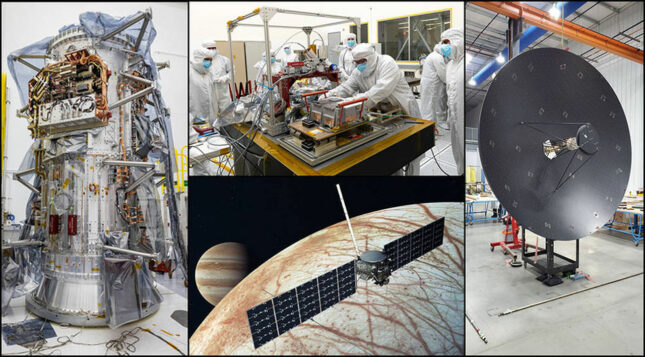 Europa Clipper is comprised mainly of its 10-foot-tall propulsion module. It’s fitted with the electronics, radios, cables, and propulsion system to push the spacecraft to Jupiter. Europa Clipper also has a 10-foot wide high gain antenna.

“Were moving into the phase where we see the pieces all come together as a flight system,” said Europa Clipper Project Manager Jan Chodas of JPL. “It will be very exciting to see the hardware, the flight software, and the instruments get integrated and tested. To me, its the next level of discovery. Well learn how the system we designed will actually perform.”