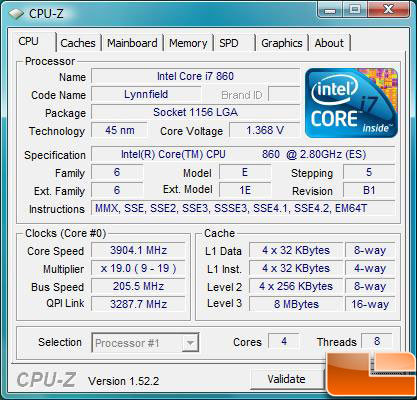 Being a mid-range board price wise, which starts to encroach X58 board prices, we were very curious to see how well the MSI P55-GD65 overclocked. In the screen shot above, we pushed the Base Clock as high as we could without encountering any issues. We were able to run 205 Base Clock without any issues, and combined with a 21x multiplier of the i7 860, this affords plenty of speed for any 24/7 air cooling set up.

Next we decided to see just how high we could push the memory and CPU speed with our board. With the Base Clock dialed back to 200, we ran an impressive 4.2GHz, with memory running at 2000MHz! Again, this is enough to push even the best 24/7 air cooling systems to, and likely past, their limits.

For testing power consumption, we took our test system and plugged it into a Seasonic Power Angel. For idle numbers, we allowed the system to idle on the desktop for 15 minutes and took the reading. For load numbers, we measured the peak wattage used by the system while running 3DMark Vantage.

As you can see the MSI system consumed slightly less power at both idle and load. Keep in mind that our system is using a dual GPU graphics card and that the 860 is overclocked to 3.4GHz!