The NVIDIA GeForce RTX 3070 Founders Edition delivered gamers a $499 graphics card that offered impressive generation-on-generation performance uplift, but we really wanted to see what the board partners were going to bring to the table. There always seems to be room for improvement and the board partner cards tend to be factory overclocked with better GPU coolers that run quieter.

The very first custom GeForce RTX 3070 card to arrive at Legit Reviews was the MSI GeForce RTX 3070 Gaming X Trio! This card is priced at $564.99 and comes with all the features you’d expect on a premium card. Those features would be a beefy TriFrozr 2 cooler, RGB lighting and a backplate that has been infused with graphene! 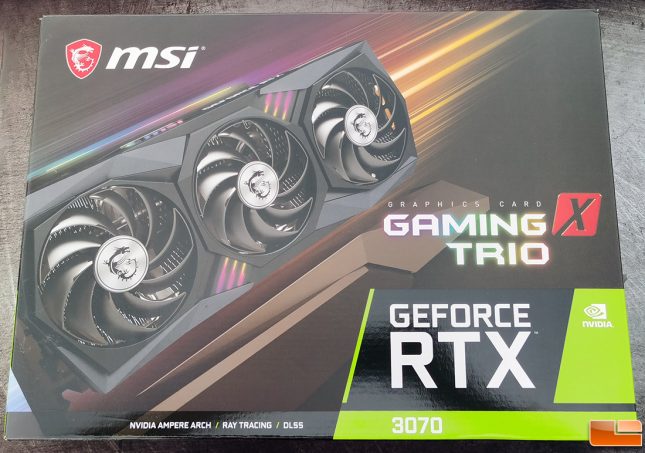 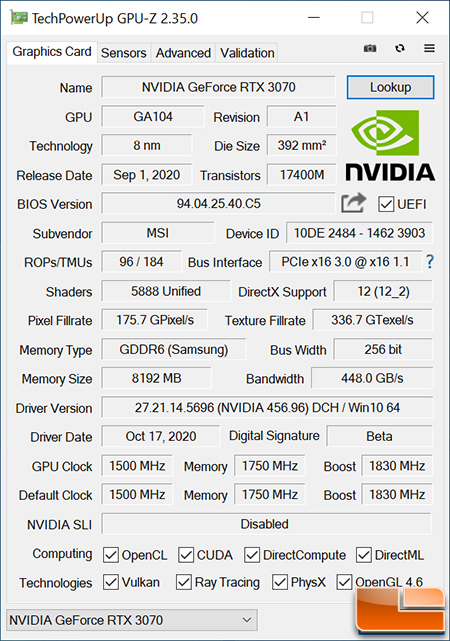 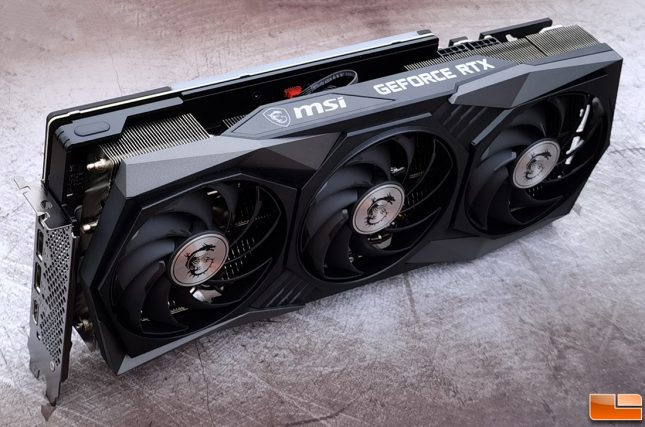 MSI knows that this card is big as they include an anti-bending strap to keep the card in the box to prevent it from bending and breaking something! The strap appears to be made from the graphene infused plastic that the backplate is made from, so it matches the card and won’t stand out in the system. 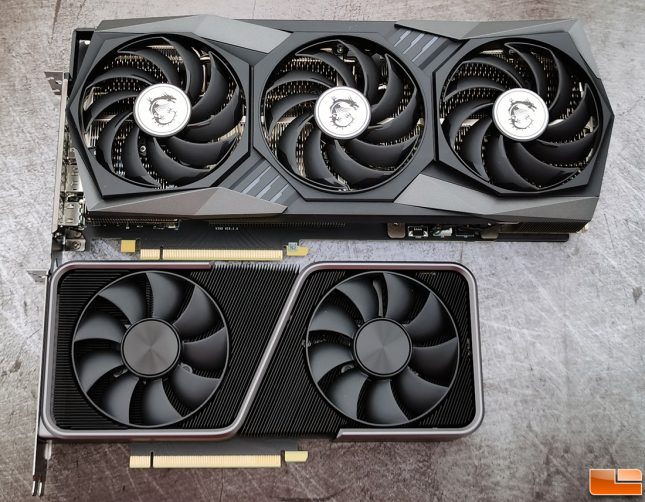 The TriFrozr 2 GPU cooler was designed to handle anything you can throw at it and easily keeps this 240W card cool. The GeForce RTX 3070 Founders Edition is rated at 220W, so MSI cranked up the board power a bit on this card. While the cooler is nice looking it was designed to be functional with three Torx Fan 4.0 cooling fans and 6 heat pipes that make direct contact with the GPU baseplate. 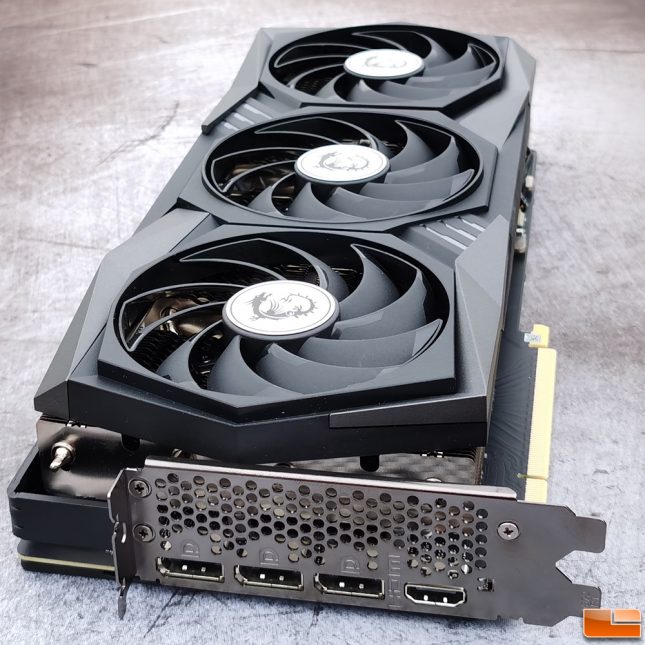 Display outputs on the GeForce RTX 3070 Gaming X Trio are what we would consider to be standard for this class of cards. You have three DisplayPort 1.4a connections and a single HDMI 2.1 port. Part of the dual-slot IO bracket has holes drilled in it for air circulation, but the cooling fins don’t push much air out the ends of the card for them to really be functional.

On the back of the card we see the ‘Graphene’ backplate and the thin white strip along the top edge of the card is where the RGB lighting is located. 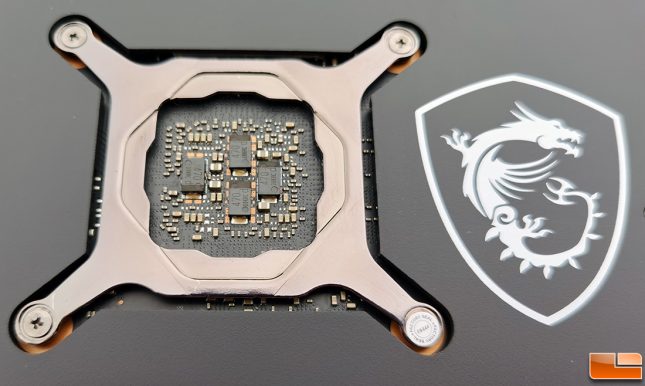 The GeForce RTX 3080 launch made talking about POSCAPS (SP-Caps) a big deal, so we wanted to show that the capacitor layout on the GeForce RTX 3070 Gaming X Trio utilized four POSCAPS. We experienced no stability issues whatsoever on our review sample.

We aren’t going to do a full tear down, but MSI went with a 9+2 VRM power design for this model. The nine phases for the Ampere GPU are rated at 45 Amps each. MSI offers a 3-year warranty on their graphics cards in the event that something does give you issues straight away or years from now.

Along the top edge of the card you have the MSI logo and you can see this model is wider than a standard 2-slot card, so it will take up three slots in your case. 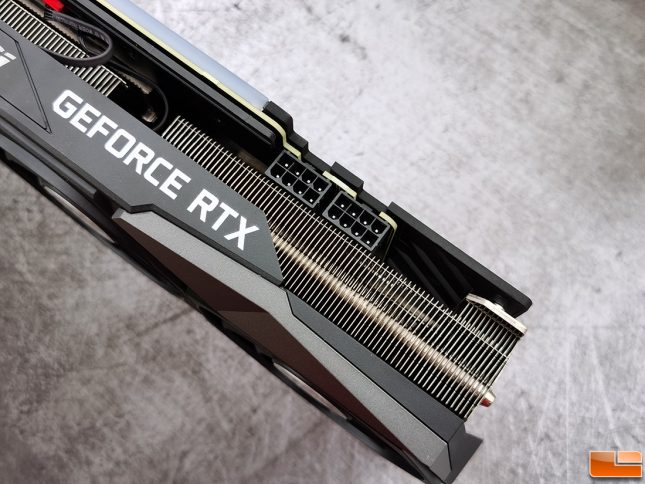 MSI went with two 8-pin PCIe video card power connectors to ensure this model gets plenty of power. The Founders Edition model features a 12-pin connector that needs an adapter to convert overt to a single 8-pin connector, so we are fine with this design choice.

Looking up from the bottom of the card you an see the three cooling fin arrays and the heatpipes that are running through the card. 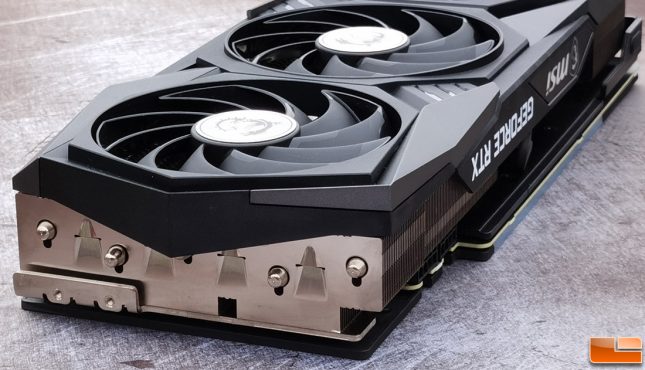 On the end of the MSI GeForce RTX 3070 GAMING X TRIO 8GB you can see the deflectors that have been stamped into the middle of the aluminum cooling fins. This improves airflow dynamics by guiding air to where its needed for maximum cooling. The ‘wave-curved 2.0’ fin edges are also visible and these disrupt unwanted airflow harmonics resulting in reduced noise.

Let’s check out the test system and benchmark this card!