Motorola is doing their best to make our everyday lives easier. They release cool phones with more and more features and added functionality. Lately, they have been turning their attention mobility accessories. One of the latest devices from the company is their wireless headset, the HS-850. 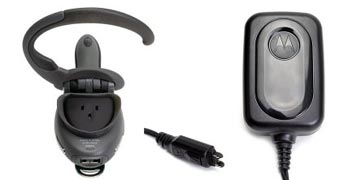 For a MSRP of $99, and street price of around $80, is this headset good enough to make you want to cut the cord of your current ear piece or even want to make you upgrade? We took HS850 through it?s paces to see if Moto has put out a Legit device. For our test we used two different cell phones, the Treo 650, and the Motorola RAZR V3. Going in to the testing we figured that the Motorola might work better with the Motorola headset, but the difference in performance was astonishing.

The first thing you might be wondering is ?how is this different from the old Motorola 810 headset?? Good question. Motorola claims to have better battery life with a longer talk (10 hours) and standby time (200 hours) compared to the HS-810. [See Nathan Kirsch?s review of the HS-810 here.] This headset is also supposed to be more compatible with BT 1.2 devices and protocols. Motorola retains it basic ?flip? design that is very popular among HS-810 users. The flipping open of the boom powers the headset on. Keeping the headset boom closed conserves the battery life and keeps the set in standby mode. The cool blue indicator is still there that gives the user visual clues as to what mode the headset is in: On/Standby; On Call; Multifunction Mode.

The HS-810 and HS-850 are physically the same weighing approximately the same with the same size footprint. There are three physical buttons on the unit; the large ?multifunction (call)? button, and two ?Volume Control? buttons. Since the headset can be worn on both ears, the earhook can be removed and rotated to wear on either side of your head. This procedure takes about 1 minute but you need both hands so make sure you decide which side you want to listen to before driving!

Initial charging of the HS-850 took less than the advertised 2 hours and subsequent charges usually take 20 minutes to just over an hour to charge fully after a typical days use. I was disappointed that the charger for my RAZR V3 wasn?t the same for this headset, but having the extra little charger isn?t really that big of a deal.

The first thing one needs to do with a Bluetooth headset is to ?pair? it to a Bluetooth enabled device. For the HS850 (and most other BT headsets) this is done by first making sure your phone?s BT feature is on. Then, with the HS850?s boom closed, you press and hold the multi-function button until the blue light on the headset stays on. Next, while still holding the multi-function button, you open the flip microphone. The light should still be on.

At this point you tell your phone to search for BT devices. After the HS850 is found, then you enter the passkey. The headset indicator light flashes several times to let you know that the pairing was successful. Initially, this took a few tries to get right, but after you do it once or twice, you will get the hang of it.