Minecraft is one of a handful of video games that have been able to take the world by storm, crossing over into education from what started as a simple game. One of the coolest things about Minecraft is how customizable the game is and all the things you can do with the simple blocks. A new mod has launched for the game called VM Computers.

The mod is created by a person going by delta2force and uses VirtualBox to boot operating systems ranging from Windows 95 up to Windows 98 inside Minecraft. Creating the PC in the game requires players to craft and “ordering tablet” and then wait for an in-game satellite to orbit into their game. The satellites reportedly orbit five times per game day. 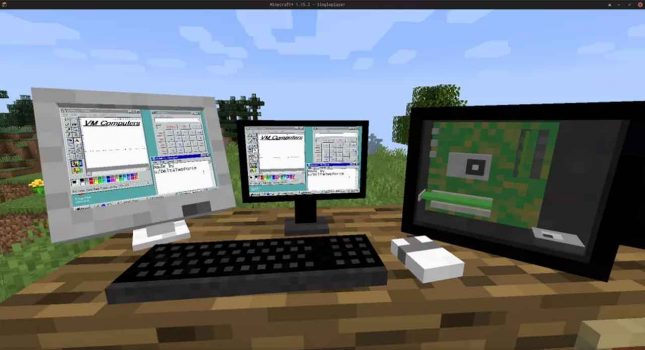 Once players have their computer, they can run other video games inside Minecraft. Specifically, the 1993 classic FPS Doom will work on the in-game computer. Why would you want to play another game inside of a game? We can’t answer that question for you, but it’s always cool to have new things to do, particularly during the coronavirus pandemic keeping many people stuck at home.

Players interested in getting their PC inside Minecraft can follow the instructions here. Another cool aspect is that players have to build the computer inside the game reports PC Gamer.