Microsoft has announced pre-order availability for the Surface 2 and Surface Pro 2 mobile devices. Banking on improvements to boost sales, Microsoft is forging ahead with their two Surface lines even though they haven’t sold quite as hoped. The biggest improvement in our eyes is the increase in battery life which is reportedly much improved for up to 10 hours of use (measured via video playback). on the Pro, this comes partially due to the move to the i5 Intel Haswell processor which runs at 1.6GHz. Both are slightly slimmer and faster with a new line of accessories including lighter-weight and backlit keyboard covers, a music kit cover, and a docking station.

The Surface 2 will retail for $449 and comes with Windows RT 8.1 with Office 2013 RT and powered by a NVIDIA Tegra 4 processor with a 10.6″ screen that can now display Full HD 1080p video. The cameras have been bumped as well with a 3.5 megapixel front and 5 megapixels rear that’s capable of 1080p recording. The Surface 2 will be available in 32GB and 64GB configurations. 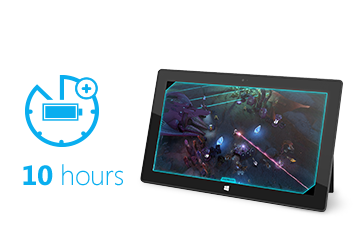