Legit Reviews was recently introduced to the Meater+ wireless smart meat thermometer on a call we were on about the latest back to school gadgets. The last thing we expected to learn about was a Bluetooth enabled meat thermometer, but it actually turned out being something interesting and sounded like it would free up time. Being able to cook dozens of different types of meat while monitoring it from an app sounds great. With many kids virtually learning at home this year, the Meater+ could seriously free up some time and ensure the family is well fed.

The Meater meat thermometer has two temperature sensors that can monitor internal meat temperature up to 212F and ambient and the external ambient temperature up to 527F simultaneously. This information is then tied into the free Meater app for iOS and Android that ensures your cut of meat is cooked exactly the way you like it to be prepared. So, the Meater+ wireless smart meat thermometer in conjunction with the companion app figure out the cooking time with real-time data and let you know when your food is ready. You can use it pretty much anywhere you normally cook, so your indoor stove and outdoor grill or smoker are all fair game. 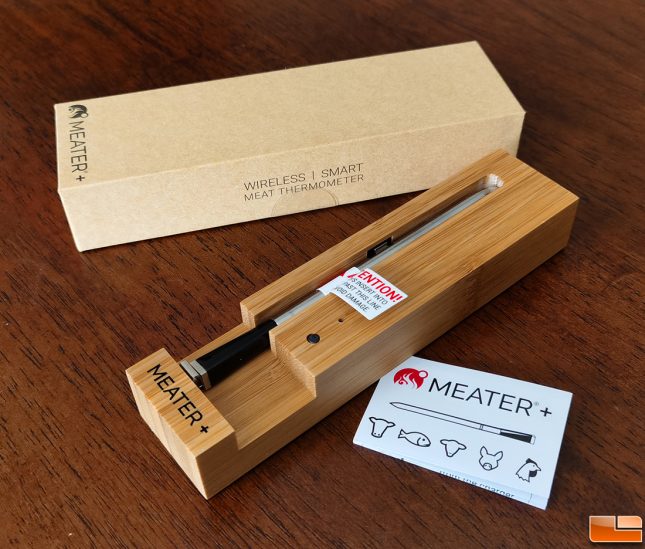 The Meater+ comes in a nice bamboo box that serves as the charger and the Bluetooth repeater. The wooden box measures roughly 6.1″ x 1.4″ x 1.1″ and weighs in at just under 3.5 ounces. On the front of the box there is a button and an LED indicator light that allows you to check the battery status. The LED lights up solid green when it’s fully charged. It also blinks green when the probe is connected wirelessly to the box via Bluetooth and red when it is not. When you first get the Meater+ you need to pull a plastic tab off one of the battery connections and let it charge for four hours before the first use. 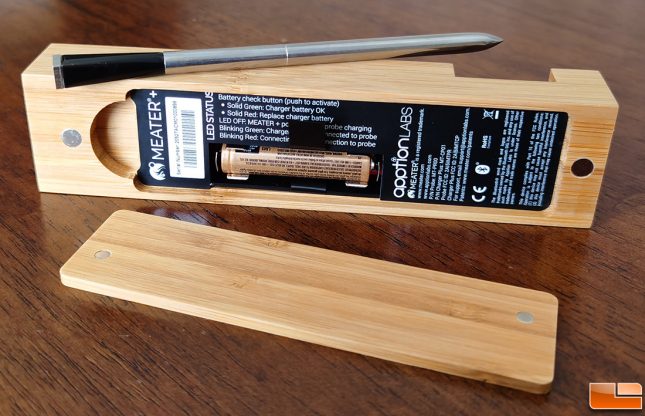 On the bottom of the enclosure there is a magnetic cover that can be removed to give you access to the single AAA battery inside. You supposedly can charge the MEATER up to 100 times with one AAA battery and each charge will last 24 hours. The box itself is also magnetic and this is actually required as it needs to be within about 10 feet or less of where the probe is being used. The thermometer or probe features a Bluetooth LE 4.0 wireless connection and measures 130mm in length and 6mm in diameter. The stainless steel and ceramic construction allows it to be dishwasher safe for easy cleaning. The line near the middle of the probe needs to be about an inch inside of the thickest part of the meat you are cooking.

The box itself doubles as a signal repeater, extending your Bluetooth LE 4.0 wireless connection range on vcg bfthe probe from around 30 feet up to around 165 feet. The original Meater lacks this feature and costs $30 less than the Meater+ that we are reviewing here today that runs $99.00 shipped. When Meater+ is not being used you can stick the box wherever you like and it will be fully charged when you next need it. The magnets on the box make storage easy as it allows to to be stuck on the side of a refrigerator or any other magnetic surface. 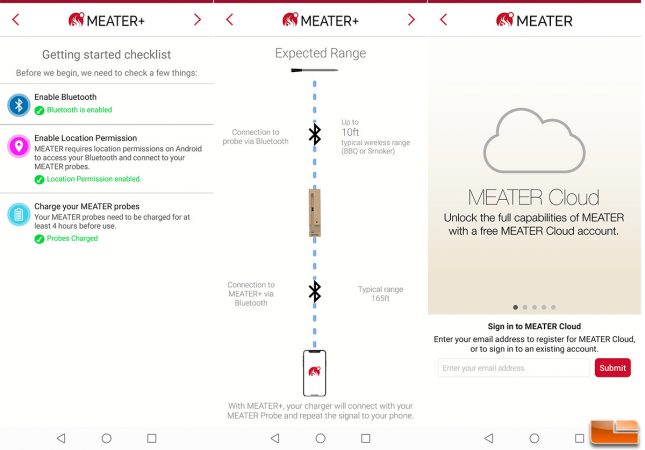 The Meater App is free and installed on our Android smartphone without any complications. It walks you through everything to get going your first time as you’ll need to have Bluetooth enabled, location permission must be allowed and the probe needs to be charged. Our Meater Probe shipped to us with firmware 02|01.04.00.00 on it and the app let us know an update was available. The update took 11 minutes to do over Bluetooth and updated our probe to firmware version 02|01.04.02.04. 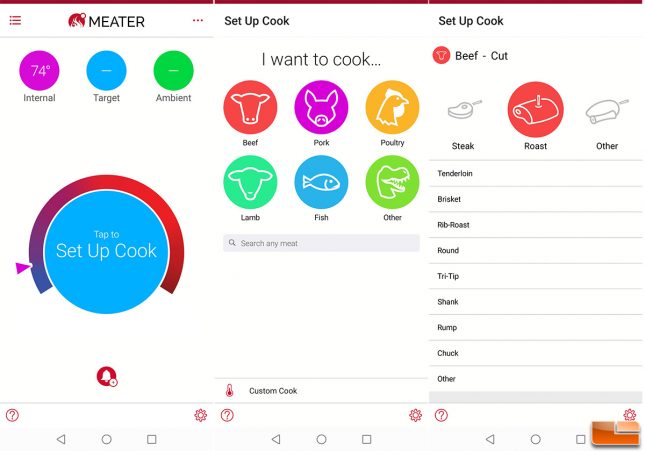 Once all that was done we could setup the cook that we wanted to do. At this point in time the meter was showing an internal temperature of 74F and that is exactly what the room temperature was! The probe is said to be able to measure temperatures within +/- 1F of accuracy.

To try out the Meater Plus we wanted to try out grilling a cut of meat that we have never tried before. The cut that came to mind was the tri-tip roast and our local grocery store already had them cut and available for purchase. Grilling Tri-Tip became a thing in the 1950s in California and the triangular cut of beef from the bottom sirloin subprimal cut has become popular nationwide ever since. Finding it to cook on the app was simple! 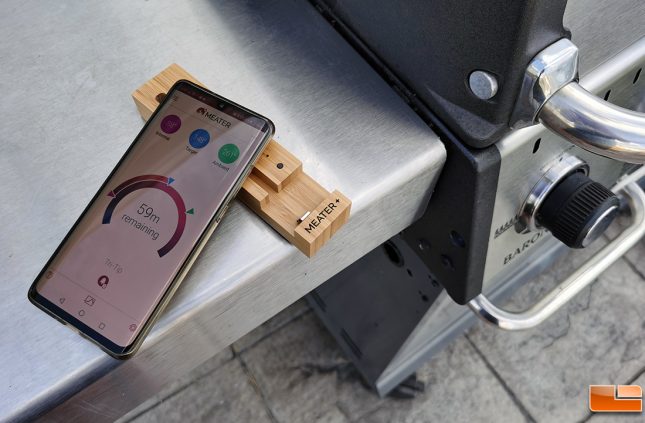 We started out by placing the seasoned roast on grill and searing each side for about 6 to 8 minutes over the flames on high heat. We then lowered the gas burners down to medium, moved the Tri-Tip to the other side of the grill inserted the Meater Plus smart wireless meat thermometer. We then started the Meater cooking app and walked away after lowering the two burners that we had on down to medium. Ideally you want the ambient temperature in the grill to be between 250-300 degrees and on our grill we were able to do that with just two burners. 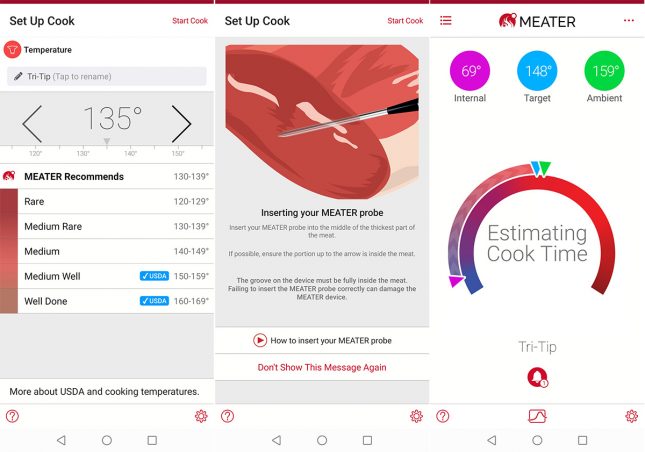 Once the Tri-Tip roast was selected on the app you can pick how well you’d like the cut cooked. Our family likes medium to medium well, so we manually entered in a target temperature of 148F and hit cook. 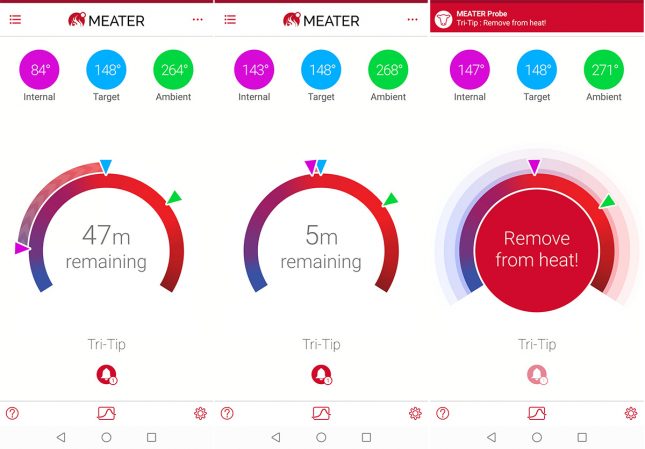 It takes about five minutes for the app to estimate the cooking time and it originally told us that it would take about an hour. Once you get near the target temperature the app will tell you to remove the meat from the heat source and let it rest. 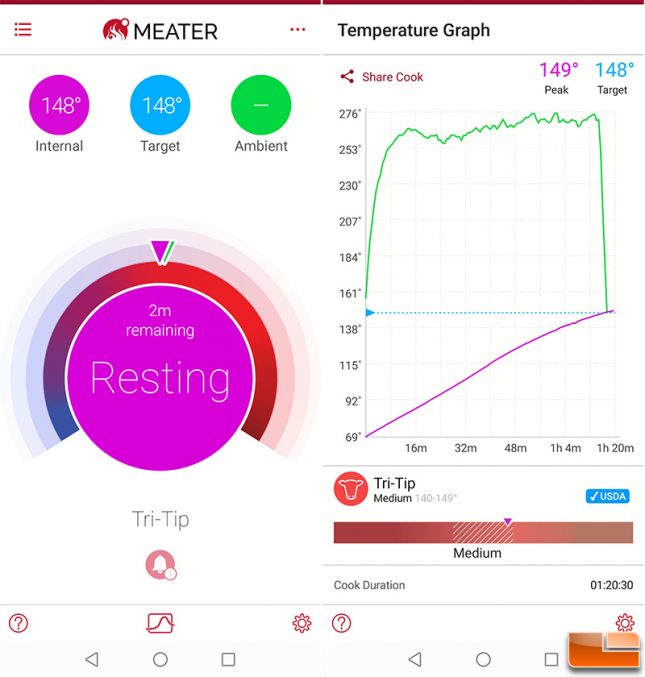 We never once opened the lid of the grill during the cook, which was very strange and something you have to force yourself to do. If we would have opened the lid the heat would have quickly escaped and we wanted to maintain a constant temperature inside the grill. 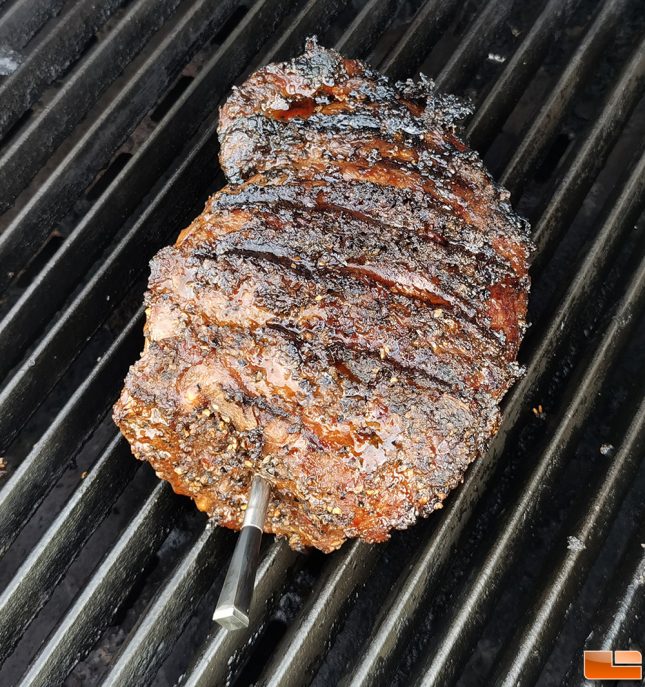 The finished product exceeded expectations and using the Meater Plus was a huge success! Our meat didn’t have a smoke ring on the outermost section like a smoker would give, but it still tasted great! Now might be the perfect time to add a wood chip smoker box to our Broil King Baron Liquid Propane Gas Grill to add some more flavor to what we are cooking. Broil King sells a smoker box for their gas grills that is $28.99 shipped that should help add that smoky flavor many love and you just don’t get on a traditional out of the box gas grill. 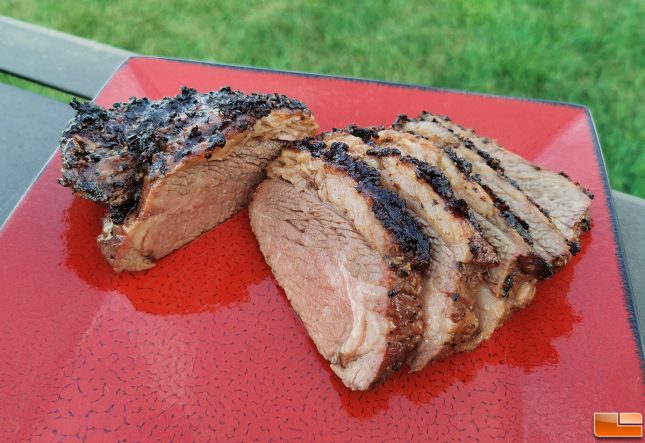 At the end of the day the Meater+ enables even the most novice of cooks to produce impressive meals. The Meater+ that we are reviewing here today that runs $99.00 shipped and that sounds pretty expensive. But, think about the cost of the meat that you are preparing with it. We spent over $100 buying brisket, tri-tip, steak and a whole chicken to try the Meater+ out. Meater+ ensures that your cooks go perfectly as long as you can maintain temperatures and don’t have any flare ups. Indirect cooking with the Meater+ allowed us to go about our day and get other things done! 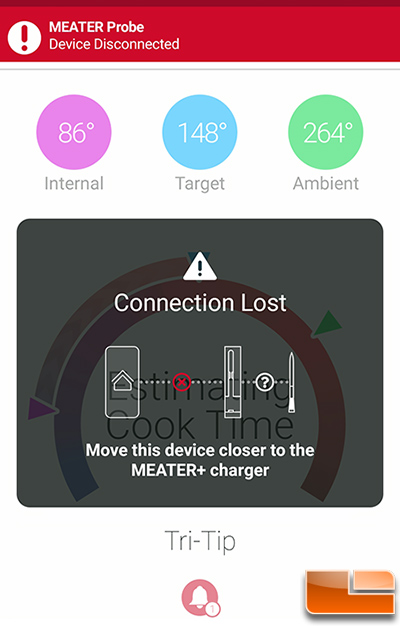 The one and only issue that we had with the Meater+ is the connection kept getting lost between our Android smartphone and the Meater+ charger box. The advertised range is 165 feet, but we were having connection issues inside our home about 15 feet away from the grill. We lost connection about 4-5 times during our 80 minute cook. We had the Meater+ block attached to the side of the grill and laying flat down. We later tried it standing up and the connection seemed to be better. We looked around at other reviews and connections issues seem to be the biggest complaint with the Meater+ and we experienced that first hand. If Apption Labs is reading this and wants to make a Meater 2+ they will hopefully beef up the battery and use a more powerful Bluetooth repeater!

Despite the connection issue we ran into, the Meater+ is something we’d recommend try out as it really is an awesome cooking tool. Most retailers will take a product back within 30 days and that is plenty of time to give it a try and see how the Bluetooth connectivity works for you.

Legit Bottom Line: Meater+ had us grilling cuts of meat to perfection that we’ve never cooked before with the full confidence that we weren’t going to ruin expensive pieces of meat.