We benchmark portable storage drives as empty secondary drives on this system using standard benchmarks that you can easily find online.

The most popular benchmark right now for storage devices is CrystalDiskMark, so that is a must to run for all storage drive reviews. On the Lexar Professional SL100 1TB portable SSD we topped out at 1,000 MB/s sequential read an 850 MB/s sequential write on the peak performance test. At a queue depth of just one the same transfer test topped out at 867 MB/s read and 733 MB/s write. Not bad file transfer speeds, but that is the top score from five runs on a relatively small file size of 1GB by default. 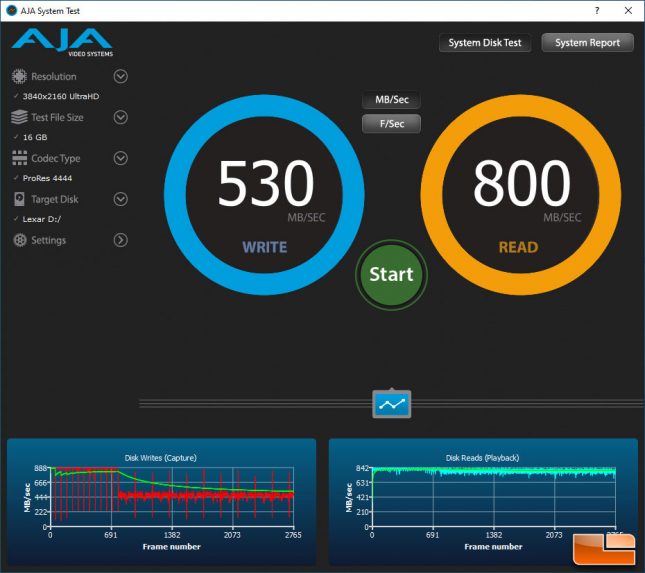 To give a little more of a real-world look at performance we ran the AJA System Disk Test with a 16GB test file set to 4K UltraHD (3840×2160) resolution. This test showed file transfer speeds that averaged 800 MB/s read and 530 MB/s write. This is the average speed and not the top speed. Notice that the drive write speed started out close to 888 MB/s, but drops down significantly when the drives cache is filled. 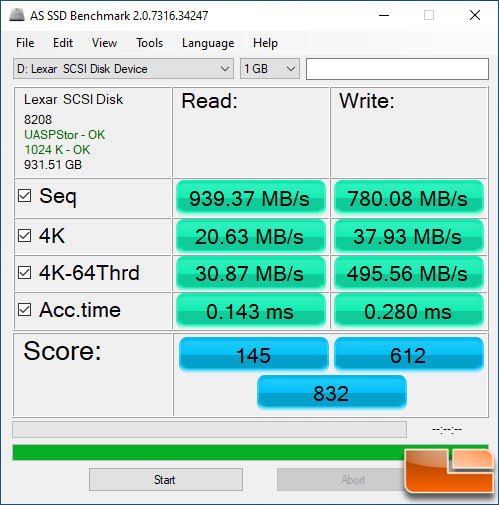 Another popular free benchmark that we like to run is AS SSD Benchmark and it shows speeds of 939 MB/s read and 780 MB/s write on the Lexar Professional SL100 Pro 1TB drive with the standard test settings with a 1GB file size. 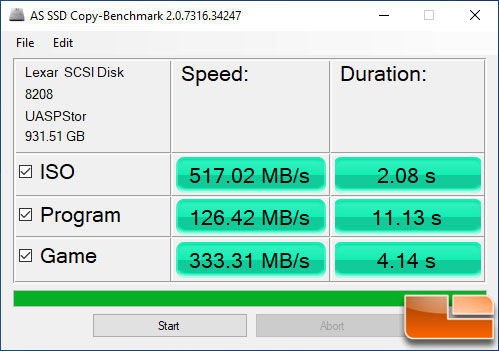 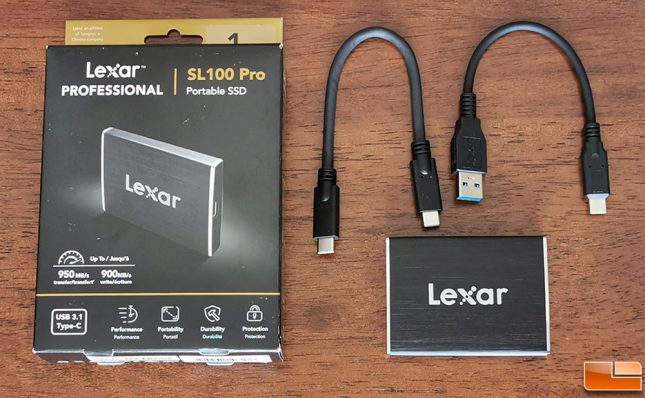 When you type in ‘portable SSD 1TB’ into Amazon over 150 product results come back. Finding the right portable drive can be a chore, but thankfully there are many drives available from known brands like Lexar. This is our first time using a product from the Lexar, an affiliate of Longsys, a Chinese company. Our overall thoughts on the Lexar Professional SL100 Pro are positive. The brushed aluminum case should be durable and it looks great. It also comes backed by a 3-year warranty and includes two types of USB cables to ensure you are able to use the drive on a wide varitey of computers.

On the performance front, the SL100 Pro came close to reaching its rated speeds of up to 950MB/s read and 900MB/s write as we managed to hit 1,000 MB/s read and 850 MB/s write in CrystalDiskMark. When it comes to moving very large files around you are looking at speeds of around 450 MB/s once the cache starts to fill. If you are writing a ton of data to the drive without any time allowed for recovery, you are looking at write speeds down around 180 MB/s, but that is only in worst case scenarios where you are moving around hundreds of gigabytes of data. That is something people seldom do and many may never move around files like that. Then again, Lexar is showing this as the ideal extended storage device for 4K videos and as a gaming drive. Some game titles are over 100GB now, but once the game it should open much faster than a traditional hard drive. This drive will work on video gaming consoles and gaming PCs.

Pricing right now runs $99.99 shipped for the 500GB model (LSL100P-500RB) and $179.00 shipped for the 1TB model (LSL100P-1TRB) that we performance tested. That pricing puts it slightly higher than the SanDisk 1TB Extreme Portable External SSD ($169.68) & Samsung T5 Portable SSD 1TB ($173.65) that are capable of reaching speeds of up to 550 MB/s. Those two models have slower speed ratings because they are SATA SSD to USB drives whereas the Lexar SL100 Pro is an NVMe SSD to USB drive. All the mentioned models are backed by a 3-year warranty. If you move around a bunch of small files the SL100 Pro will give you a great user experience that is superior to the SATA based competitors at this price point!