Lexar announced the PLAY microSD card series in Q4 2020 as being a microSDXC card that can hold all your content, no matter if they are games, movies, music or books. The Lexar Play microSD cards are capable of reaching read speeds of up to 150 MB/s. This means they are capable of delivering at least A1-rated performance levels.

The PLAY microSD memory cards are available in 128GB, 256GB, 512GB, and 1TB capacities. Each being ready for playing back or recording 1080p Full-HD video. Performance does differ between the sizes despite all being capable of reaching 150 MB/s for sequential reads.

The Lexar Play 128GB card is App Performance Class 1. This means the random read performance exceeds 1500 IOPS and the Random write performance is over 500 IOPS. It is also capable of Class 10 / U1 / V10 levels and that basically means it is capable of sustained 10 MB/s writing speeds. This is pretty much the bare minimum these days and this card can be picked up for $21.99.

Moving up to the Lexar Play 256GB card you get double the storage capacity and a card rated at class 10 / U3 / V30. This means it is capable of sustained 30 MB/s writing speeds. If you plan on doing 4K recording or playback we highly suggest getting a UHS Speed Class U3 rated card. You are looking at $45.99 for this 256GB card. 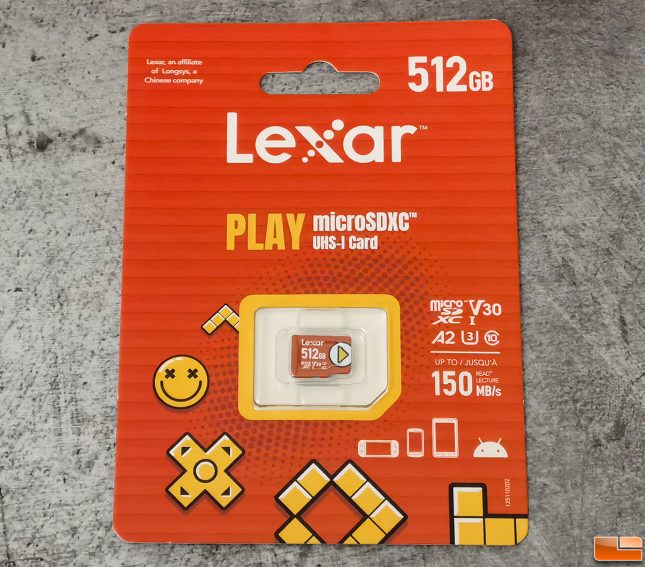 The PR team over at Lexar sent Legit Reviews the Play 512GB microSDXC memory card to try out. This card is available globally under part number LMSPLAY512G-BNNNG. The current price of this card is $94.99 shipped over at Amazon and it is backed by a 5-year warranty. 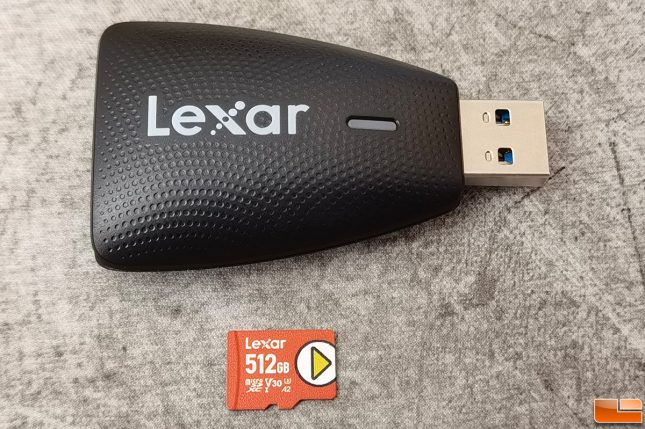 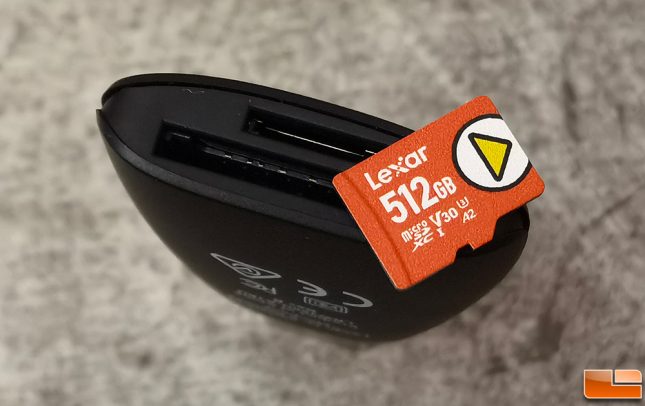 This compact reader is compatible with SD and microSD UHS-I cards and supports speeds of up to 170MB/s. We used it for testing the Lexar Play 512GB card by connecting it to a USB 3.2 (10Gbps) port on our AMD X570 desktop test platform. 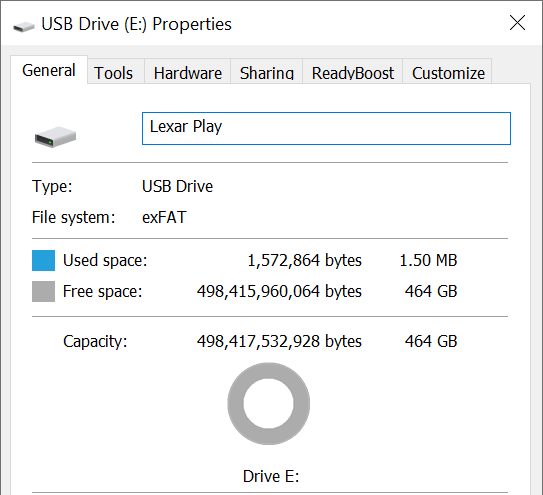 The Lexar Play microSDXC cards come with the exFAT file system on them. exFAT providse the greatest degree of cross-platform compatibility! Our 512GB drive showed up as being 464 GB in Windows 10 Pro. Actual usable capacity is nearly always less than due to formatting, partitioning, operating system, applications or other factors. 1GB equals 1 billion bytes. 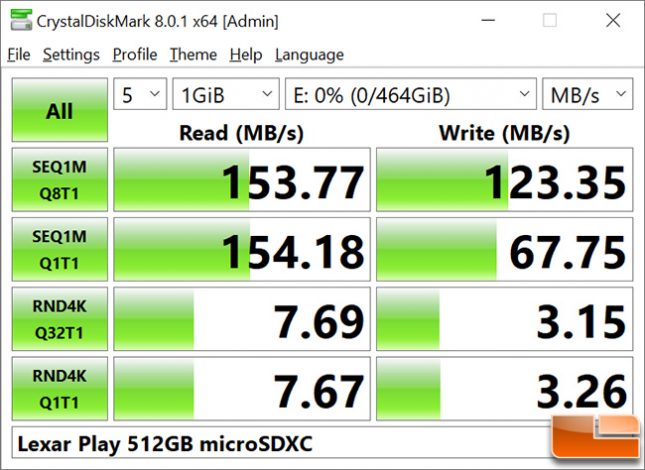 We tested the Lexar Play 512GB microSDXC card with CrytsalDiskmark first and was able to reach 154.18 MB/s sequential read and 67.75 MB/s sequential write at a queue depth of just 1. We are actually exceeding the cards rated read speed of 150 MB/s! 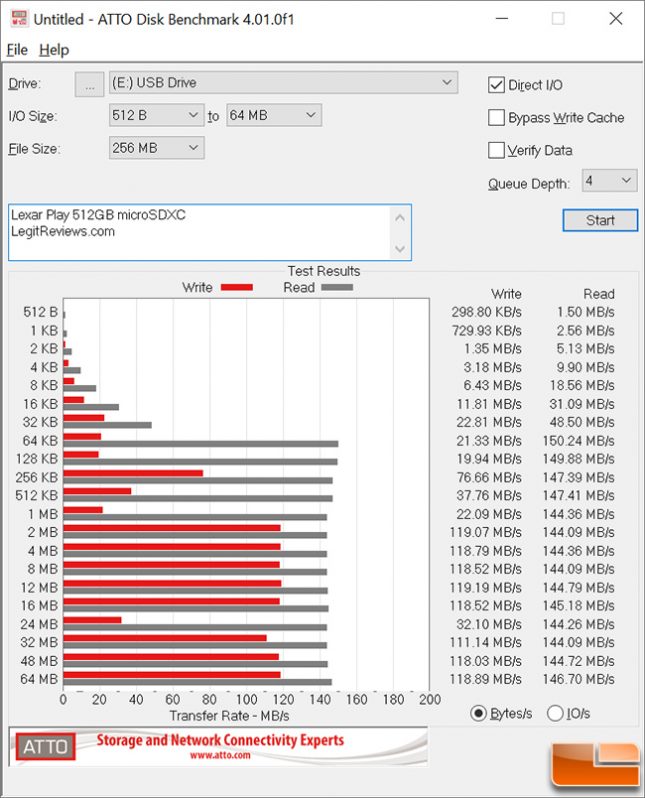 On ATTO Disk Benchmark the performance peaked at 150 MB/s read and 119 MB/s write at a queue depth of 4 and the default file size of 256 MB. 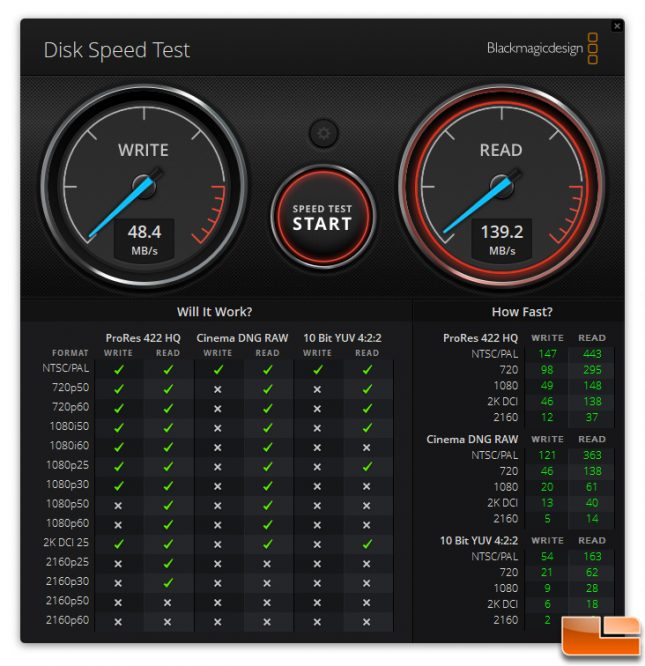 The Blackmagicdesign Disk Speed Speed test showed that the microSDXC card was getting 48 MB/s read and 139 MB/s write speeds. The test results show what video formats will work best with these speeds and how many FPS you can expect. This test runs until you stop it and we noticed that performance dropped as the test was run. 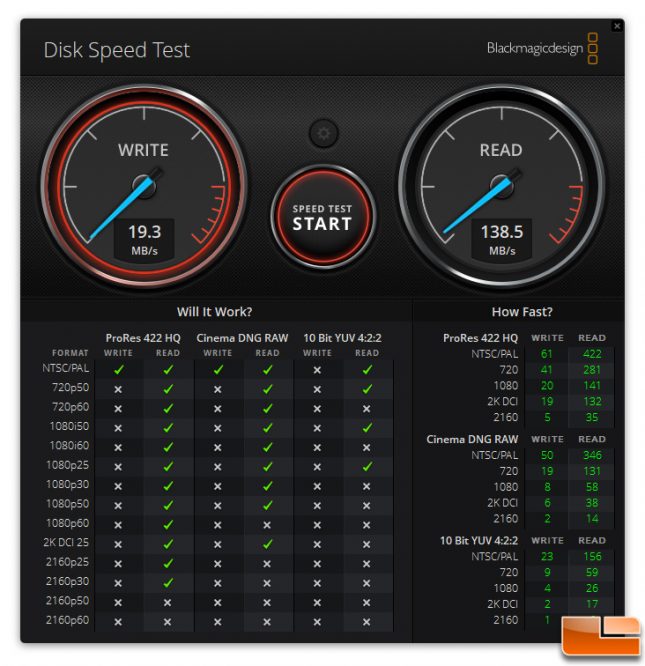 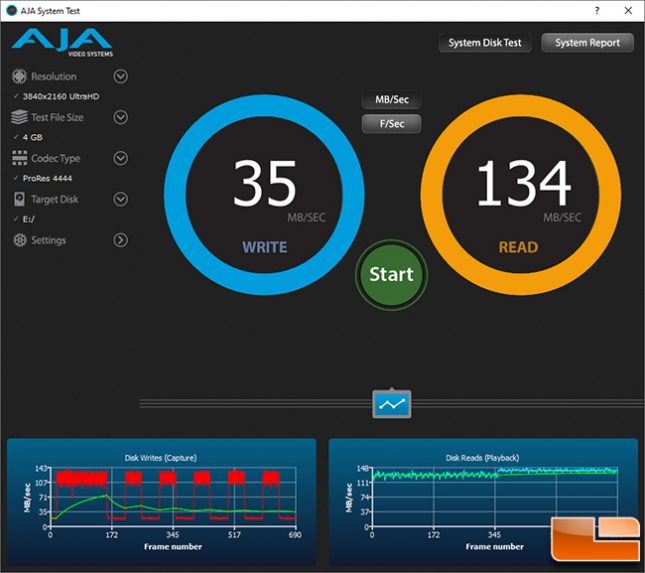 Lastly, we ran the AJA System Test and with a 4GB test file size we were getting 134 MB/s read and 35 MB/s write speeds. When you look at disk writes over time the performance is jumping between 20 MB/s and over 100+ MB/s. It looks like something odd is going on with the write performance and we shared our results with Lexar before this review was published. If they respond we’ll be sure to update this review!

The Lexar Play microSDXC memory card is aimed at gamers that are looking to quickly access their gaming library. The read performance of the Lexar Play 512GB microSDXC card that we tested was excellent. The responsiveness of the card felt snappy and games loaded on our Nintendo Switch quickly.

Our only concern with the Lexar Play 512GB card was the wonky write speeds. We expected to see sustained write performance no lower than 30 MB/s since this is a V30 card. We were unable to get sustained 30 MB/s speeds in AJA System Test and in Disk Speed Test. At first we thought it was our system and/or the card reader, so we changed systems. After trying multiple platforms, USB interfaces, and memory card readers the results were the same.