Another leaked Intel roadmap has hit the internet and brings some good news for extreme performance enthusiasts! There are two main upcoming product launches, with the more interesting one being the 4th generation Ivy Bridge-E CPUs for its HEDT platform, slated for Q3 2013. These will bring all the improvements found in the current Ivy Bridge CPUs such as 22nm Tri-Gate transistors and greater overall efficiency and performance to Intel’s premium enthusiast platform. IB-E will feature 6-12 cores (IB-E/EP) large amounts of cache, quad channel memory controllers supporting 8 GB of DDR3-1066/1333/1600/1866 per DIMM slot, along with PCI-E 3.0 (40 lanes) and 4 lanes supporting PCI-E 2.0. It’s believed that four CPUs will be launched, bearing the following names: Core i7-4930, Core i7-4960, Core i7-4970 and Core i7-4990. 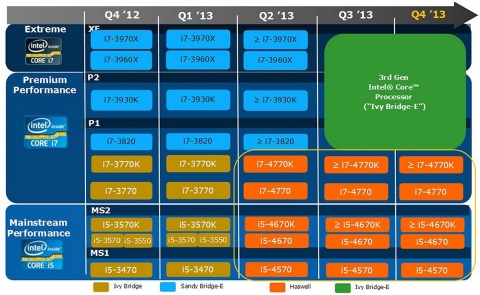 The CPUs will be compatible with the Socket LGA 2011 and X79 chipset platform and while the clock speeds and TDP aren’t known, the TDP is expected to be around the current Sandy Bridge-E level. One can only hope that the inferior heatspreader that current Ivy Bridge CPUs are saddled with causing them to run hotter and significantly reducing overclocking ability will be replaced for the extreme enthusiast grade IB-E CPUs by the superior soldered one found on the earlier Sandy Bridge CPUs. It would be a slap in the face to customers paying so much money for a premium product otherwise.

The other product launch will be better versions of the current Sandy Bridge-E chips, slated for Q2 2013. These are expected to feature higher clock speeds, but the most interesting part will be the first 8 core consumer CPU from Intel, the Core i7-3980X Extreme Edition. Expect to pay dearly for it.

The company would also give an update to its current Sandy Bridge-E lineup as the recently launched Core i7-3970X (higher clocked 3960X) isn’t enough for consumers. We are looking at faster variants of the Core i7-3930K, Core i7-3820 and a new Extreme Edition processor built to replace the Core i7-3970X. However this time, Intel plans to change the game with the launch of its first 8 Core consumer CPU – Core i7-3980X.