Lamborghini has revealed the Huracan GT3 EVO2, a race car that was specifically built for the GT3 class. The vehicle is based on the Huracan STO sharing its rear-wheel-drive architecture and naturally aspirated V10. The engine produces 640 horsepower in the road-going version of the car.

It’s unclear how much power the engine makes in the racing car. Lamborghini says the vehicle complies with the new FIA 2022 regulations. Other changes include a new carbon fiber floor combined with the new diffuser to produce more downforce than the current version of the car. 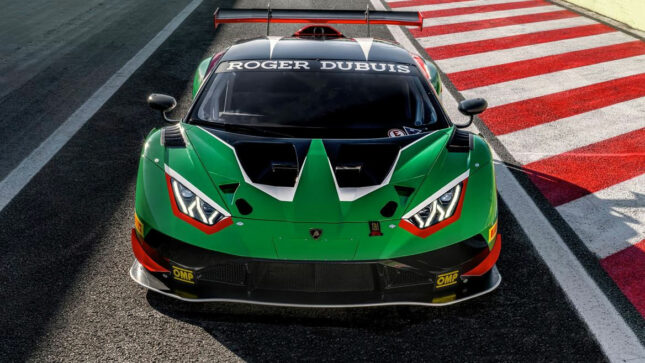 The roll cage was redesigned and uses carbon Kevlar honeycomb side panels to protect occupants in the event of a side-impact. The vehicle will be available for customers in the second half of 2022, and there is a kit to upgrade the GT3 EVO to EVO2 specification.

Giorgio Sanna, Lamborghini Head of Motorsport, commented: The new Huracn GT3 EVO2 is not simply an evolution of the current car. Its a new project that reinforces the technological transfer between Lamborghinis motorsport division and the company and inherits two difficult tasks: to prove as successful as the previous generations of Huracn GT3, which have won more than 40 international titles in six seasons, and to match its commercial success by helping to reach the target of 500 Huracn racing cars since 2015.