Fountain Valley, CA October 30, 2018 Kingston Digital, Inc., the Flash memory affiliate of Kingston Technology Company, Inc., a world leader in memory products and technology solutions, today announced DRAMeXchange, a division of TrendForce, has named it as the number one supplier of SSDs in the channel for all of 2017. According to DRAMeXchange,Kingston accounted for a whopping 23 percent of the 55 million units shipped last year. DRAMeXchange is one of five research divisions of TrendForce and has conducted thorough and methodical research in both the NAND and DRAM industries since its creation in 2000.

The findings by DRAMeXchange means Kingstons staggering output places the company well ahead of its competitors in a fast-growing industry. The results reinforce Kingston as the clear leader in SSD production as the second-place supplier accounted for only 8 percent of the total channel market. As a category, third-party (non-semiconductor) SSD makers accounted for 60 percent of the total number of SSDs shipped in 2017. Kingstons position with SSDs is remarkably similar to its success in the DRAM market as it has been the largest third-party memory module supplier for well over a decade.

Its an honor to achieve this top ranking as the Kingston difference has always been how easy we are to work with, the level of sales support we provide, and the access customers and partners have to our product experts and engineers, said Ariel Perez, SSD business manager, Kingston. For over 30 years, Kingstons focus has been with our customers and channel partners worldwide. Together, the terrific relationship has helped our SSD business grow rapidly since we shipped our first drive in 2009. We share this success with them. 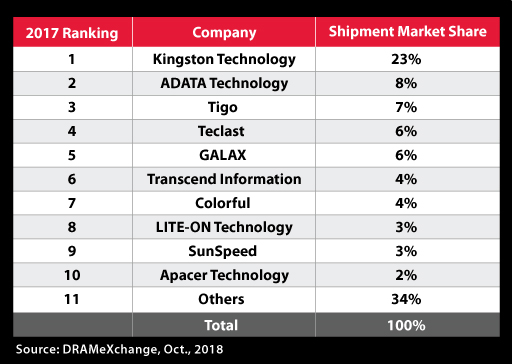