TeraCopy 2.2 Beta 2 is a compact program designed to copy and move files at the maximum possible speed and features a timer that works great for review purposes as we can easily show you time differences between different file transfer scenarios. TeraCopy also uses dynamically adjusted buffers to reduce seek times and has asynchronous copy speeds up file transfer between two physical hard drives. Let’s see what several USB devices that we have can do when moving around a 6.94GB game installation directory that we downloaded from Electronic Arts. 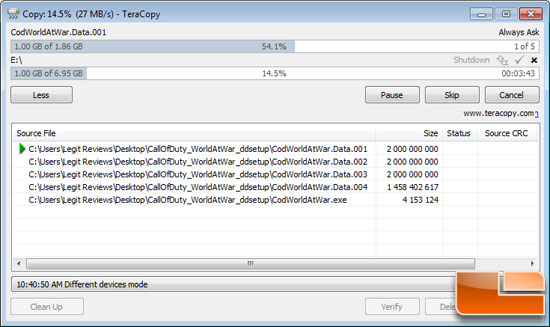 The very first test that we ran was to see how long it took to move the 6.94GB game file directory from the USB flash drive to the Intel X25-V 40GB MLC SSD that we use as the boot drive on this particular test system. 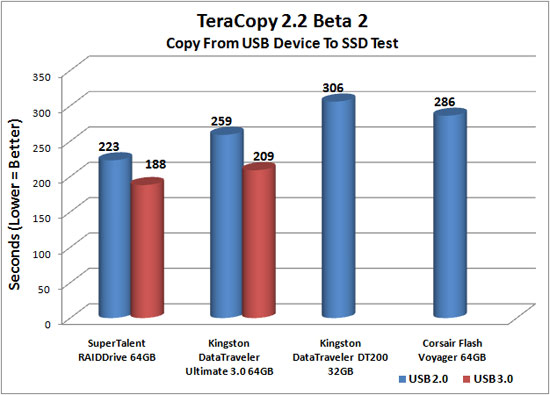 As you can see the time it took to transfer the 6.94GB drive was similar on the USB 2.0 port, but the USB 3.0 devices got a nice performance boost by running on the NEC USB 3.0 controller. 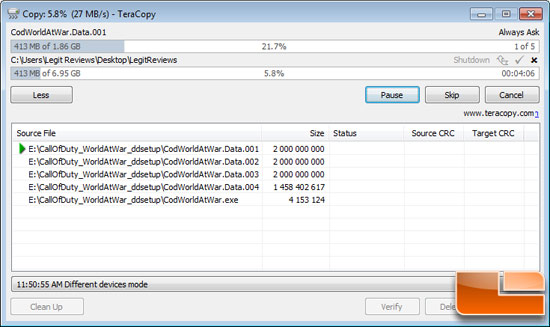 The next test we ran was to copy the 6.94GB game file directory from the primary Intel X25-V 40GB MLC SSD back to the USB devices. 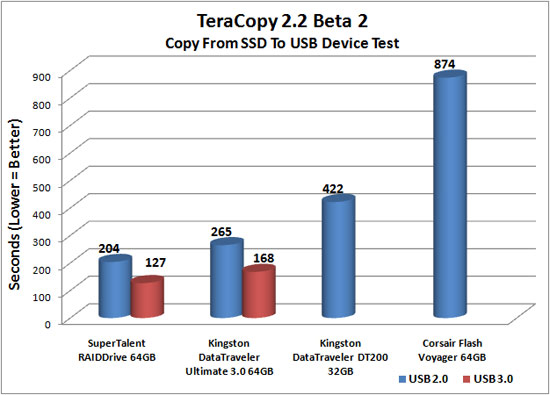 This test is much harder for the older USB 2.0 only drives and you’ll notice that performance took a rather severe hit. The Corsair Flash Voyager 64GB drive averaged just 8.1MB/s and took nearly 15 minutes to put the file on the Flash drive. The Kingston DataTraveler Ultimate 3.0 took less than three minutes to have the same file moved to it on the USB 3.0 header and averaged an impressive 42MB/s. This is more than three times faster than the Corsair Flash Voyager, so if you have an older mainstream Flash drive moving to USB 3.0 could be huge.

As you can see from the charts above, the Kingston DataTraveler Ultimate 3.0 64GB drive performs much better on a SuperSpeed USB 3.0 interface and it takes just under three minutes to move a 6.94GB folder from the SSD to the USB 3.0 Flash drive! Try moving a ~7GB file on your current PC and USB Flash drive to see how it compares to the speeds that we are seeing!