Kingston Technology started shipping the DataTravler Ultimate series of SuperSpeed USB 3.0 Flash drives in 2010 and has been continuously updating the series to make sure they look modern and have the highest performance possible at the time they are released. Pretty much all PC users know that USB 3.0 technology that offers up to ten times the data transfer rates of USB 2.0 and is the way to go when it comes to moving around large amounts of data. The original DataTraveler Ultimate 3.0 Flash drive series came out in 2010 and was rated by Kingston as having read speeds of up to 80MB/s and a write speeds of up to 60MB/s. These Flash drive were quick, but in 2011 Kingston released the DataTraveler Ultimate 3.0 Gen 2 series with speed ratings of up to 100MB/s read and 80MB/s write speeds! Here we are in 2013 and Kingston has released the DataTraveler Ultimate 3.0 Gen 3 series with speeds of up to 150MB/s read and 70MB/s write. As you can see there is a significant improvement in read speeds over the past several years, but the write speed has little changed.

The DataTraveler Ultimate 3.0 G3 is available in 32GB and 64GB capacities under the part number DTU30G3. If you are shopping for a drive be sure to remember part numbers that begin with DTU30 are the original drives and are slightly slower. Just like most storage drives, the cost per GB goes down as the capacity goes up. For this review we were sent the Kingston DT Ultimate 3.0 G3 32GB DTU30G3/32GB model, so that is the drive we will be using for testing. Both the 32GB and 64GB are rated at 150MB/s read and 70MB/s write, so there shouldn’t be a performance difference between these two products in case you are curious. 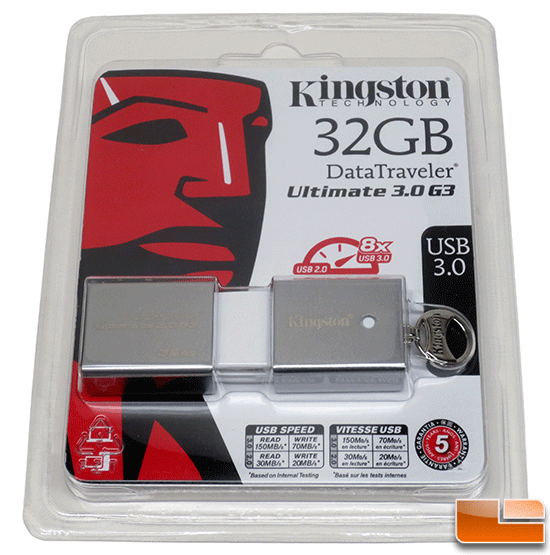 The Kingston DataTraveler Ultimate 3.0 G3 comes in clam shell packaging that clearly shows the capacity, speeds, interface and the warranty length. Most low-end USB Flash drives don’t come with speed ratings, so if you are shopping for a drive and are having a hard time figuring out speeds, that is why. Pretty much all low-end drives use the lowest cost parts available at the time, so you’ll find all sorts of NAND Flash brands and controllers in them. With high-end drives like the Kingston DataTraveler Ultimate 3.0 G3 not all Flash controllers and NAND will run at these rated speeds, so there are strict component guidelines that need to be met. On the lower right hand corner of the packaging you can see that this drive features a five year warranty and free tech support from Kingston should you need help with anything. 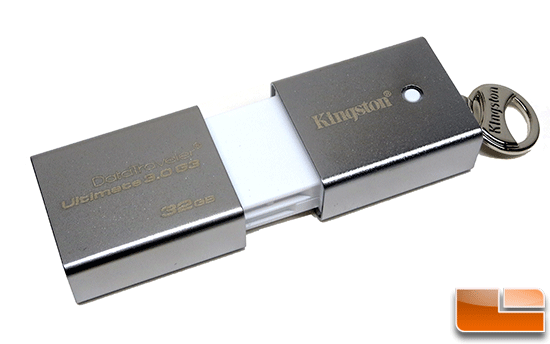 The Kingston DataTraveler Ultimate 3.0 G3 measures in at 68.40mm x 22.76mm x 11.60mm and weighs in at 1.125 ounces (31.9 grams). The external silver casing is metal, while the inner components are housed inside a white plastic housing. The metal finish does show finger print smudges, but goes really well with most silver colored laptops. The white plastic inner housing is an interesting color choice it might yellow after years of UV abuse by sunlight or show dirt. An auto mechanic or anyone in a dirty greasy field would quickly dirty the white plastic. 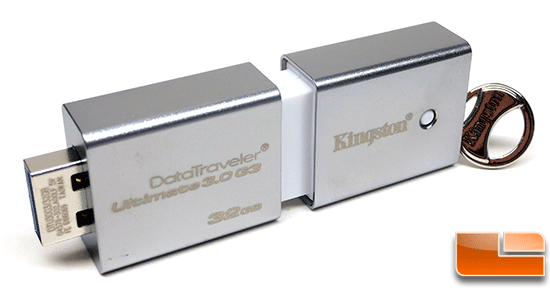 The DataTraveler Ultimate 3.0 G3 doesn’t have a cap to get lost over the years as it has a slider design. The slider design is nice, but does have some negatives. The complaint we hear the most is that pocket lint or dirt and debris get into the always open USB connector. This shouldn’t be an issue for 99% of people, but it is worth noting for full disclosure. As you can see from the image above the product name, capacity and Kingston logo have all be laser etched into the metal housing. The drive also has a blue activity LED light in the end of it that glows blue when not in use and flashes while transferring data. The light remains the same color whether it is on a USB 2.0 port or USB 3.0 port. 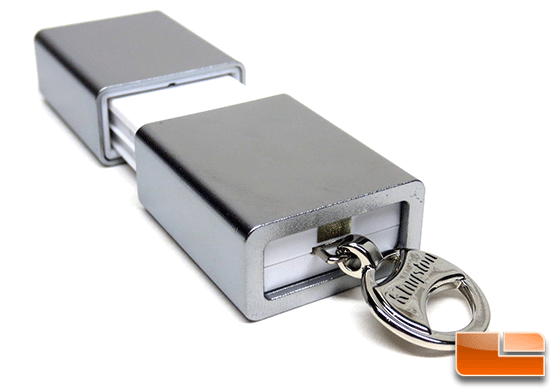 The Kingston DataTraveler Ultimate 3.0 G3 features a metal loop for you to attach it to a key chain or lanyard. It feels fairly sturdy so unless you apply enough force to bend the metal it should be secure. 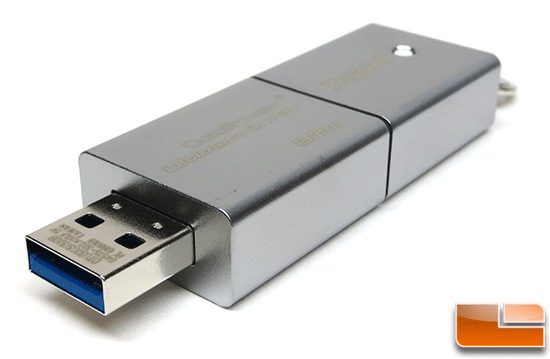 Here is at the blue Superspeed USB 3.0 header on the Flash drive with the slider in the open position.

Now that we know the basics of this Kingston DataTraveler Ultimate SuperSpeed USB 3.0 Gen 3 Flash drive we can move on to benchmarking!