Select Plus, Go! Plus, and React Plus Get Benchmarked

Kingston Digital released the ‘Canvas’ series of Flash memory cards in 2018 and while the series was widely popular, it was due for refresh as consumer needs have changes and speeds have improved. In March 2020, Kingston released the new and improved ‘Canvas Plus’ series Flash cards. Canvas Plus comes in three different variations for both SD and microSD cards: Select Plus, Go! Plus, and React Plus.

The lineup includes both SD and microSD memory cards with increased performance for the latest DSLR cameras, Android devices, action cams/drones and for all those shooting 4K or 8K video. The Kingston Canvas React Plus use the latest Ultra High Speed (UHS) II interface, a first for Kingston. These cards are rated at up to 300 MB/s, so the React Plus cards come with the new MobileLite Plus UHS-II reader to ensure you are able to reach peak performance and not be speed limited by an old memory card reader. 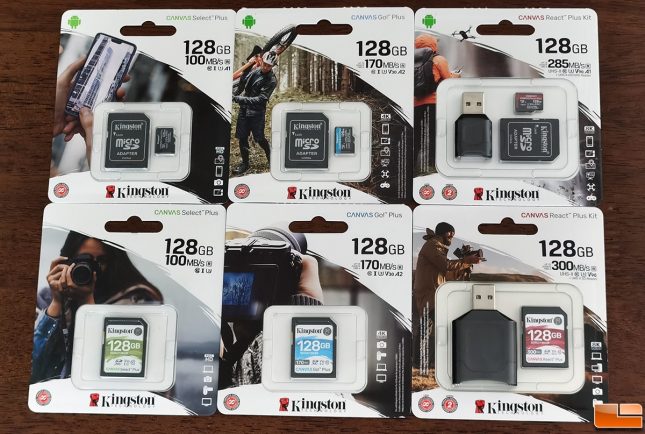 Kingston sent out 128GB models for each of the series in both microSD and SD form factors. We ran a quick speed test on CrystalDiskMark v.7.0.0h using the real preset that tests at a queue depth of one on just a single CPU thread. All testing was done on an AMD Ryzen powered desktop that was running on an AMD X570 motherboard with the AMD Ryzen 5 3600X processor. The 10Gbps USB 3.1 port on the rear I/O panel was used and the Windows 10 Pro 64-bit OS was set to high performance mode. 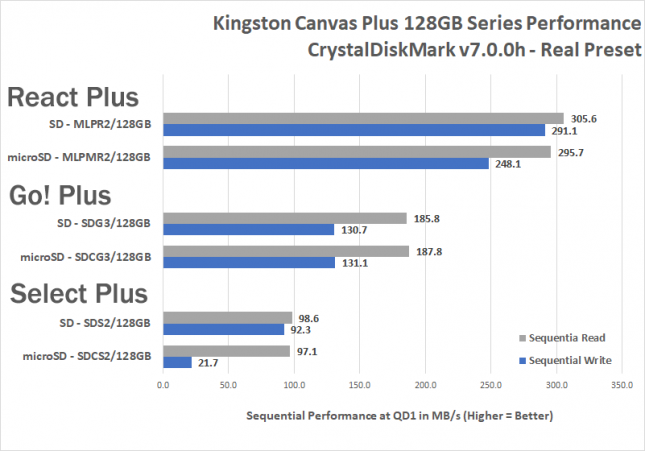 The performance difference between the Select Plus, Go! Plus, and React Plus series is easily seen in the result chart above. The Canvas React Plus SD memory card came in at 305.6 MB/s read and 291.1 MB/s write. The microSD version of the same card came in just slightly behind at 295.7 MB/s read and 248.1 MB/s write. The Kingston Canvas Go! Plus SD and microSD cards has basically identical performance of around 185 MB/s read and 130 MB/s write. Lastly, the entry-level Kingston Canvas Select Plus SD card had 98.6 MB/s read and 92.3 MB/s write speeds. The Select Plus microSD card had 97.1 MB/s read speeds, but the write speed wouldn’t budge over 21.7 MB/s. We tried different card readers, systems and even benchmarks and nothing would show performance getting over that number. We transfered a 10GB video over to the card as as actual real world performance test and we again got a sustained 21 MB/s from the one large video file. 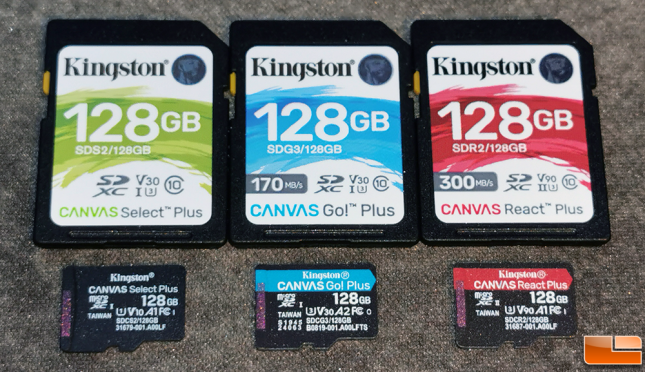 Using the Kingston Canvas Plus series card is something pretty straight forward and our conclusion is that you should get the speed that fits your needs. The pricing for the full sized 128GB SD cards starts at $24.99 shipped on the Select Plus, goes up to $32.97 shipped on the Go! Plus and then tops out at $133.58 shipped for the flagship React Plus model.

When it comes to the microSD cards the prices are $21.75 shipped on the Select Plus, $29.99 shipped for the Go! Plus, and $126.99 shipped on the React Plus. All Kingston Canvas Flash cards are backed by a lifetime warranty, so paying more won’t get you a longer warranty in this situation.

The Kingston Canvas React Plus cards are impressive if you are willing to pay the price premium to get the Class 10 UHS-II U3 speeds and card reader. Reaching over 300 MB/s read and 290 MB/s write on the full SD card (MLPR2/128GB) was awesome. 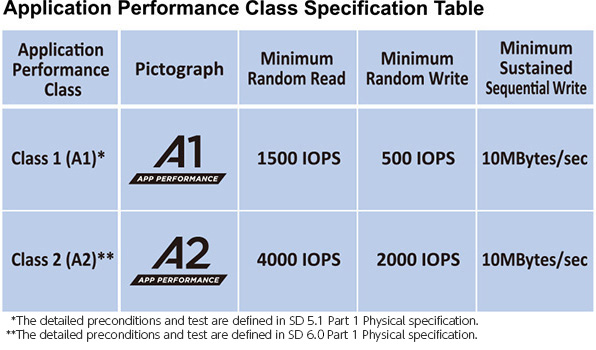 Our recommendation for most people would be to go with the Kingston Canvas Go! Plus series. It only costs slightly more than the entry-level Select Plus cards and you get the better A2 app performance class support. Application Performance Class 12 (A2) allows for higher performance than A1 cards by using functions of Command Queuing and Cache. This is a big deal for mobile users that are tired of sluggish performance from their current card on their expanded storage. If you are looking for a microSD storage card that will be recording video 24/7 we suggest looking at the Kingston High Endurance series that is rated for 20,000 hours of video recording. The Kingston Canvas Plus cards are not given an endurance rating like that.

Legit Bottom Line: Get what you can afford and has the speed ratings that you are looking for!