We have been working with Kingmax now for well over a year and while their presence in North America is not overwhelming the company is alive and doing well overseas. One of the keys to their market success is due to low price points while also introducing innovative marketing techniques, the most noticeable being colored PCBs. Today we are looking at the fastest modules Kingmax has to offer in their Hardcore Series of memory — DDR500.

Right off the bat you notice that the PCB on the modules is gold in color, single sided, and use the BGA form factor. It is common knowledge that single sided memory is slower than double sided memory, so this memory is not aimed at the extreme enthusiast looking for the most performance possible. The most interesting feature of these modules has to be the BGA form factor and it should be better explained. 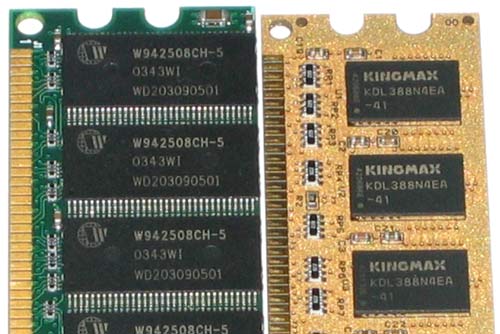 For starters Kingmax calls their memory chips “tiny BGA”, but the majority of consumers in North America refer to these as “Micro BGA” IC’s. The BGA form factor uses balls of solder under the IC rather than pins on the side of the IC (TSOP design) for attachment to the PCB. The above image shows an example of the TSOP form factor on the left and the BGA form factor on the right. It is clear that the BGA design requires less space and also produces a shorter connection distance and higher connector density than TSOP, thus making BGA the design of choice for the future! Actually, all DDR2 modules will all be made in the BGA form factor as it is the only design that has been approved by JEDEC.

One of the other neat things about the BGA form factor is that is needs less voltage to get the job done. This is why the Kingmax DDR500 modules are rated at 2.6V, but we found that they ran fine when run at 2.55V. Thanks to the way Kingmax has setup these modules we have found them to be the coolest running pair of DDR500 modules that we have seen to date. Not only does this cut down on costs, such as having heat spreaders, but in temperature critical situations this memory could save the day. This could prove to be a major selling point for users with SFF cases, home theater PC’s (HTPC), or any heat critical custom case.

The memory we are testing today are unmatched memory modules. Kingmax assures us they they have been designed and tested to run on pretty much all chipsets on the market. Meaning both single and dual memory channels in both the AMD and Intel platforms. The Kingmax modules are designed to be run in overclocked systems and they do carry a full lifetime warranty. This means that they are guaranteed to operate, as specified by their data sheet and in the operating environment for which they were intended, for the life of the product.

What is under the heat spreader? 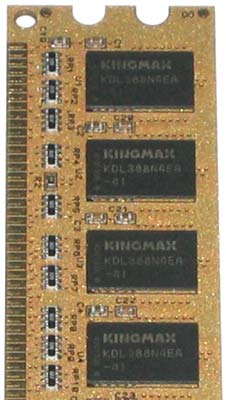 Since these modules do not have heat sinks the IC’s are easy to check out. We have been told that Kingmax purchases silicon wafers from tier 1 wafer producers, then the wafer is cut and packaged (BGA chip)
at Kingpak — a sister company of Kingmax. The IC’s are then speed rated and labeled with the best chips slotted for the DDR500 hardcore series. The IC’s that are being used in our 256mb DDR500 odules are in the 32Mb x 8 configuration and are rated 4.1ns by Kingmax.

Now that we know what the memory is rated for by Kingmax let’s see how stable the modules are!