Pretty much everyone is familiar with Kentucky Fried Chicken, or KFC, the restaurant famous for its founder as much as it is for chicken. KFC and Cooler Master have teamed up to build the KFConsole, and it’s as weird as it sounds. The console promises to play video games and keep your chicken warm.

The console has a drawer in the front that appears to have enough room for a couple of chicken strips. The heating chamber uses the natural heat and airflow from the console to keep the chicken warm. The device was built and designed by Cooler Master and is housed in a custom NC100 chassis. 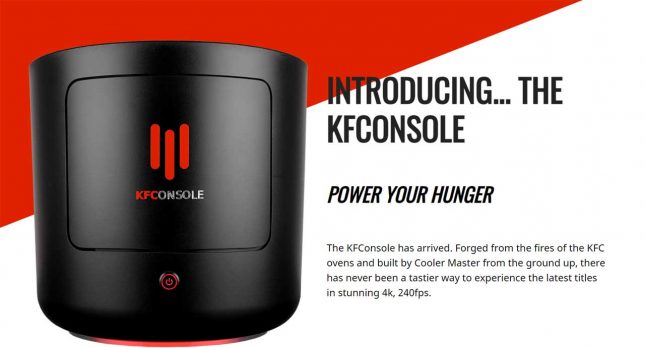 The console is powered by an Intel Nuc Extreme Compute Element. It also has a hot-swappable GPU slot allowing graphics to be updated down the road. Storage utilizes a PCIe NVMe for fast booting, and it has a pair of one terabyte SSDs for bulk storage.

The console supports 4K resolution, ray tracing, and is VR ready. While it’s called a console, it’s just a small form factor gaming PC. There is no indication this is anything other than an advertising concept, but it would be kind of cool if you could buy it.