Intel has officially announced the Xeon processor 5500 series, previously codenamed “Nehalem-EP,” which is the server version of the the Intel Core i7 desktop processor. These new LGA1366 server processors that are derived from the Nehalem microarchitecture and are officially known to be Gainestown cores. These SMP-enabled parts feature a second 6.4GT/s QPI link to broker inter-CPU communication, which is the main difference between them and desktop parts. As far as specs are concerned, the processors support tri-channel DDR3, 4MB or 8MB L3 cache, and an 80-130W TDP. The Intel Xeon processor 5500 series includes many of the same breakthrough technologies that radically improved system speed when the Core i7 desktop processor was launched. Technologies such as Intel Turbo Boost Technology, Intel Hyper-Threading Technology, integrated power gates, and Next-Generation Intel Virtualization Technology (VT) improved through extended page tables, allow the system to adapt to a broad range of workloads. 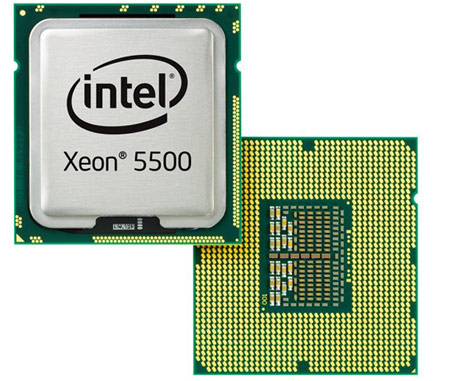 Intel does not have just one or two of these processors coming out, they have ten Gainestown processors that are on the way to retail markets around the world. When it comes to pricing the Intel Xeon processor 5500 series ranges in price from $188 to $1,600 in quantities of 1,000. Major computer makers, such as Hewlett-Packard, Dell, and IBM will feature them in servers soon, if they have not already. 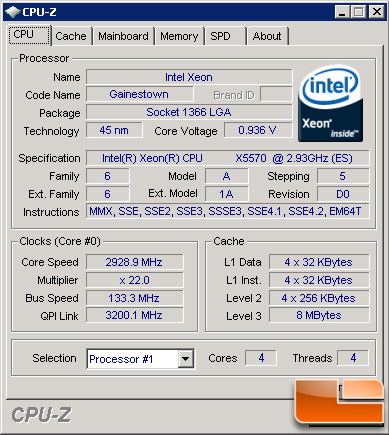 With a clock frequency of 2.93GHz the Intel Xeon X5570 is still a force to be reckoned with and as you can see from the CPU-Z shot above. According to the CPU-Z readings and from what I could tell in the BIOS this 95W TDP processor runs at idle with 0.936V and at full load at 1.104V. These are awesome voltage numbers that are being seen from a recent D0 stepping processor. With a full 8MB of L3 shared cache and a 6.4GT/s QPI link this processor should destroy any other processor that we have ever benchmarked here on Legit Reviews. It should be noted that on the Intel Xeon X5570 the processor operates at 2.93GHz with DDR3 memory speeds up to 1333MHz. Under certain conditions, Intel Turbo Boost Technology can provide operating frequencies up to 3.33 GHz, depending on the processor and system configuration. Let’s take a look at Cinebench R10 and find out! I’ll also be including the performance results of a pair of Intel Xeon E5520 Gainestown processors that operate at 2.26GHz with a full 8MB of shared L3 cache, but a lower QPI of just 5.86GT/s. Thanks to the lower QPI speed the DDR memory can only run at 1066MHz.