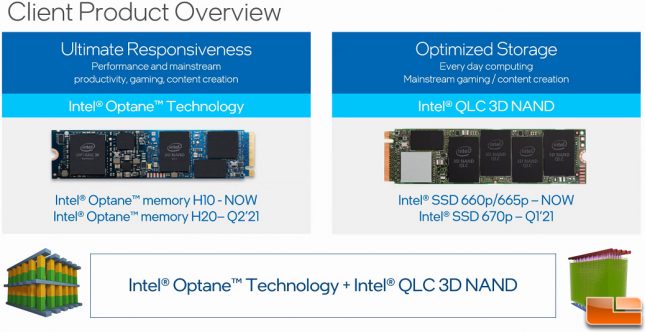 The drive that is really interesting to us is the Intel SSD 670p series. This is due to the fact that it is a mainstream consumer product aimed at every day computing, mainstream gaming, and content creation. It also features Intels next-generation 144-layer quad-level-cell (QLC) 3D NAND SSD and will launch in Q1 2021. That said, it will be readily available on the market and is something you can buy. Intel confirmed at the Memory and Storage 2020 event the 670p will be sold to Intel’s OEM customers and as a retail boxed consumer products! 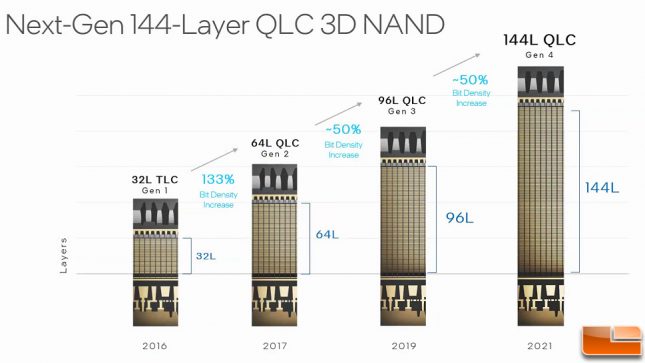 The next slide that Intel showed was the progression that they went through over the years and really is impressive how quickly things have progressed. They’ve gone from 32-layer TLC NAND in 2016 to shipping products in 2021 with 144-layer QLC NAND. This chart shows how Intel has significantly increasing the bit density generation over generation to get to where we are today. 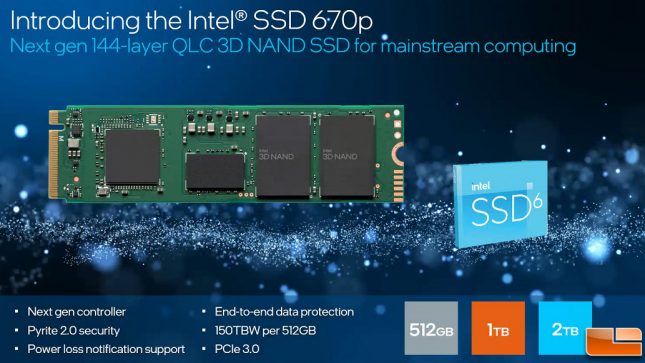 Intel isn’t ready to go into specifics for the Intel SSD 670p drive series today, but they did say that it features a next generation PCIe Gen 3.0 controller that significantly improves the performance. It’s going to have end-to-end data protection, Pyrite 2.0 security, power-loss notification support, endurance of 150 TBW per 512 GB, and will be available in capacities of 512GB, 1TB and 2TB. The Intel SSD 665p series shared the same endurance rating for lifetime writes and was also available in capacities of up to 2TB. 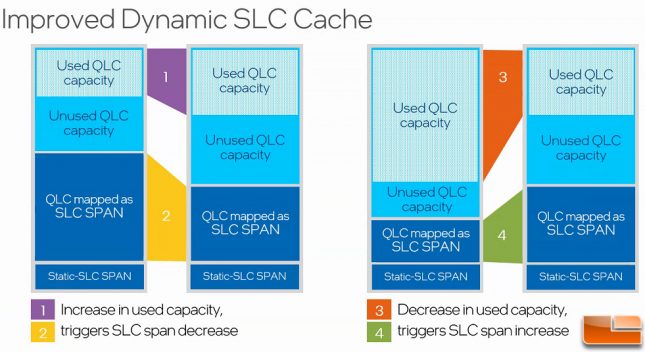 One of the biggest innovations that Intel on the SSD 660p series was a dynamic SLC cache. The slide above offers a brief look at how Intel dynamic SLC cache works. The image on the left-hand side has two bar charts. On the left you have the static SLC pan span and what this means is SLC cache that’s there throughout the life of the product. And then the next dark blue bar is QLC NAND that is mapped as SLC for better performance. Above that in the light blue and the white area is the unused and used QLC capacity. Now as the user uses the drive, they may start filling up the empty drive capacity and you can see what will happen on the right-hand side. The QLC that is mapped as an SLC span will start to decrease in size as the drive fills up.

What happens when an end user decides to delete files on their drive and free up space? That is what is shown on the right-hand side of the chart. It shows that you can actually can recover that QLC capacity as SLC cache so it’s dynamic in that the SLC cache can be reduced or grow with the user’s usage of the drive.

What is shown on the lower axis is the user data as percent of SSD capacity. So as an example, on the left it says 0%. When no capacity is used at all these drives have both their static and their dynamic SLC cache available to the user. And you can see this is the case, until you get to about 25% and this is where you see the yellow bar, which is Intel SSD 660p compared to the Intel SSD 670p, which is the dark blue line.

The area between those curves is increasing the amount of SLC cache available to users with this latest drive. So, you can see where after the drive was about 25% full on the 660p it started losing some of the dynamic SLC cache on the blue line. Intel says that they now have about an 11% general improvement in the cache utilization on the SSD 670P series.

The three boxes on the right-hand side of the slide above show how the dynamic cache actually works for each of the capacities in the 670p series. So, the largest 2TB drive will have 24GB static SLC cache that will be with the drive for the life of the product and then it has 256GB of dynamic SLC cache when the drive is fresh out of the box up to roughly 50% of usage.

Intel says that they are committed to finding ways to better the SLC cache on their client SSDs to benefit users.

Intel is not ready to talk about performance specifications or pricing just yet on the Intel SSD 670p, but we expect to learn more about those areas in January 2021. We’ve been told that we will be receiving samples to benchmark and review, so we are excited to get them in for testing!