The mathematicians and community over at mersenneforum.org found a bug in the new 6th Generation Intel Core ‘Skylake’ architecture that freezes any system that has a Skylake processor in it when running the GIMPS Prime95 Advanced Exponent test. The Skylake processor bug is reproducible when using the Windows and Linux operating systems. Intel has confirmed that its Skylake processors are suffering from a fixable bug that can cause a system to freeze when performing complex workloads. It is possible that Skylake processors could be having issues with other complex compute heavy workloads that are used in say the scientific and financial industry.

Intel discovered and released a fix for the bug that is placed in the UEFI/BIOS of the motherboard the Intel Skylake processor is being used on. Since the fix is in the UEFI and there are hundreds of boards on the market, it means that Intel will need to work with each and ever one of its board partners to release a microcode update for all the impacted boards. We haven’t heard of any motherboard vendors to roll out the UEFI updates with the Intel fix incorporated just yet, but they are coming soon and we suggest keeping an eye out for your particular motherboard model. 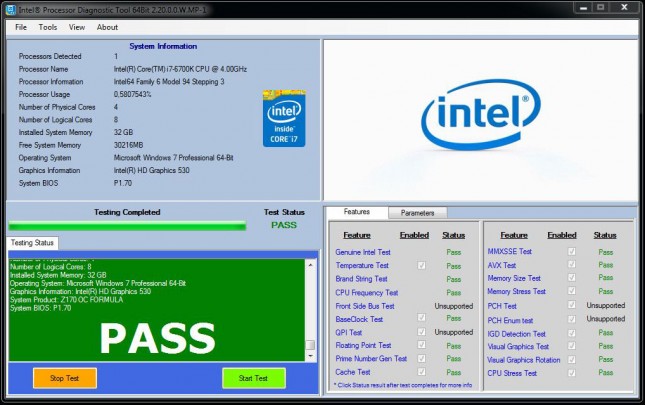 Heres what Intel has to say about the Skylake issues that happen in Prime95:

Intel has identified an issue that potentially affects the 6th Gen Intel Core family of products. This issue only occurs under certain complex workload conditions, like those that may be encountered when running applications like Prime95. In those cases, the processor may hang or cause unpredictable system behaviour.