The Intel Developer Forum is next month and on the agenda is a workshop on SSD Overclocking with a new prototype Intel SSD! We were expecting to learn all about that next month, but it appears that Intel wanted to get some community feedback before IDF and they are showing off SSD Overclocking right now at PAX Prime. 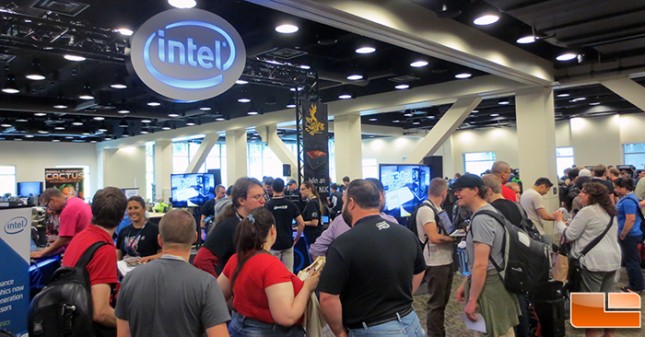 From what we gather Intel is thinking about about creating a ‘K’ series SKU for Intel Solid-State Drives. As you know the Intel K series processors are the mainstream processors that have unlocked multipliers and can be overclocked quite easily, and now it looks like we might see a K-series SKU for the SSD line up! This means that Intel would have to unlock the ‘dials’ on the SSD to give users the ability to adjust clock speeds on the controller frequency as well as the NAND Flash memory bus frequency.

Other companies have released ‘overclocked’ drives in the past by offering models with different clock speeds, but this is the first time end users have the ability to adjust the clock speeds.

Our picture didn’t turn out the greatest, but it’ll get the job done. Intel has added the overclocking ability to their already popular Intel Extreme Tuning Utility, or XTU for short. Intel XTU is already quite popular among the enthusiast crowd for overall system overclocking, with the added ability to overclock the certain Intel SSD’s I don’t doubt that the popularity will continue to grow as it becomes more powerful. 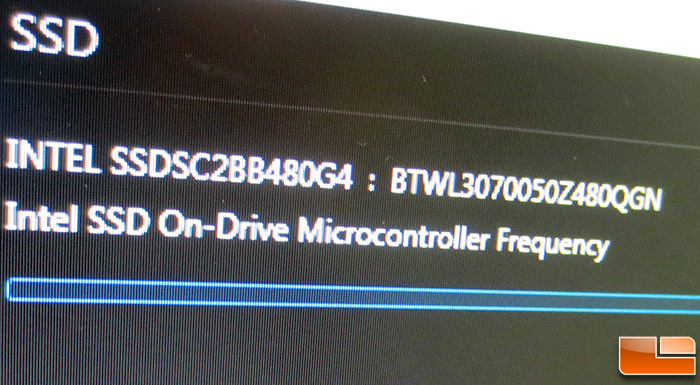 The SSD Intel is using to try out SSD overclocking looks to carry the part number SSDSC2BB480G4 : BTWL3070050Z480QGN, while the first portion of the part number brings up a high end enterprise drive (Intel SSD DC S3500 Series 480GB w/ 20nm MLC NAND Flash), the overall drive is a custom prototype SSD for overclocking (could this be the upcoming Intel SSD 730 series?). The particular drive being demonstrated is a 480GB drive, though more than likely if this comes about Intel will offer a variety of SSD sizes. Beyond that we don’t know much about this drive other than it’s a prototype with very early beta firmware.

Right now there are two different settings that can be changed, though ultimately there may be (most likely) some changes to these settings. The first setting is the controller clock speed. At it’s default the Intel Prototype SSD controller runs at 400MHz, within the Intel XTU software it can be adjusted to 625MHz. That’s a 56.25% increase in the controller speed. The second setting is the speed of the NAND chips, out of the box the chips are running at 83MHz, and we can boost them to 100MHz. It’s unclear if Intel will leave the settings as defined as this, or give us a range to work with, only time will tell. 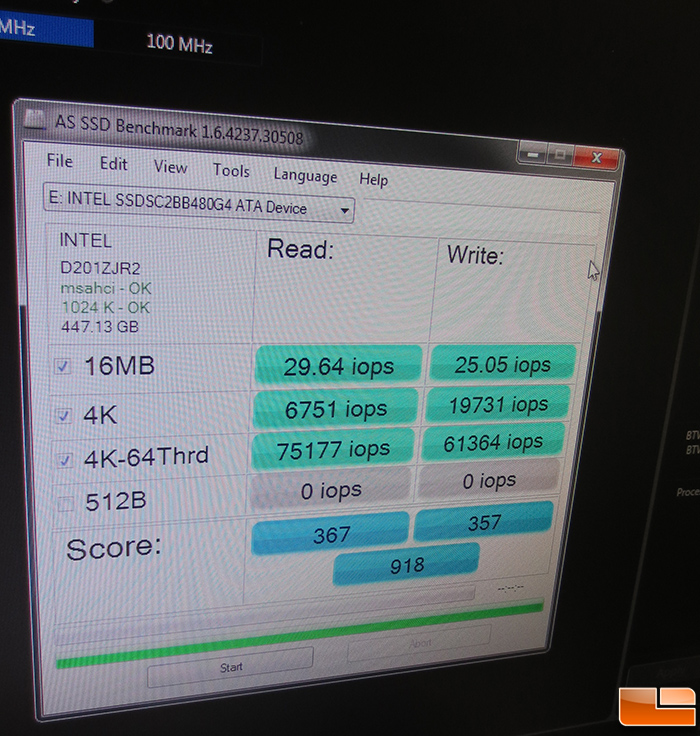 Above you can see the iops performance of the Intel SSD at its default settings, which is 400MHz on the controller and 83MHz on the NAND Flash. 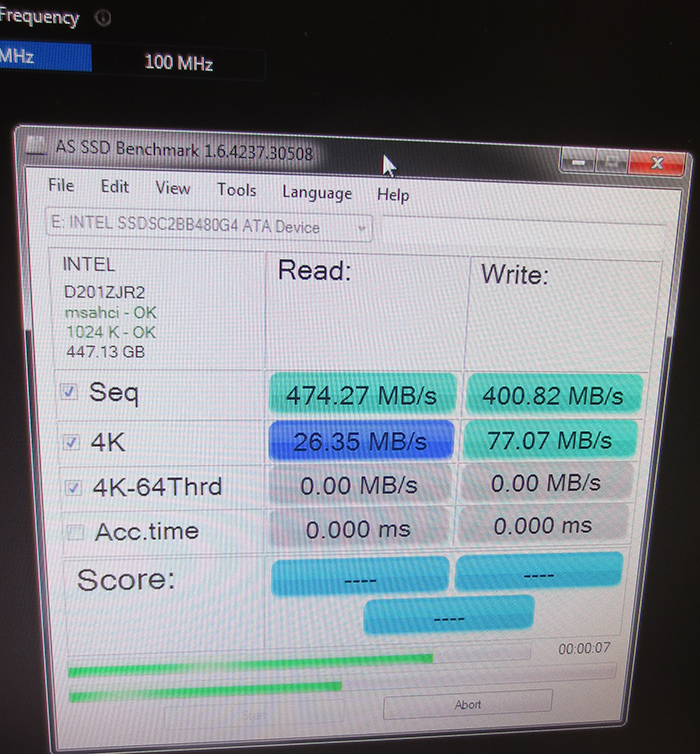 The above photo is the same run, though this time we are looking at the performance in MB/s. Our sequential read was solid at 474.27MB/s and the sequential write was 400.82MB/s. 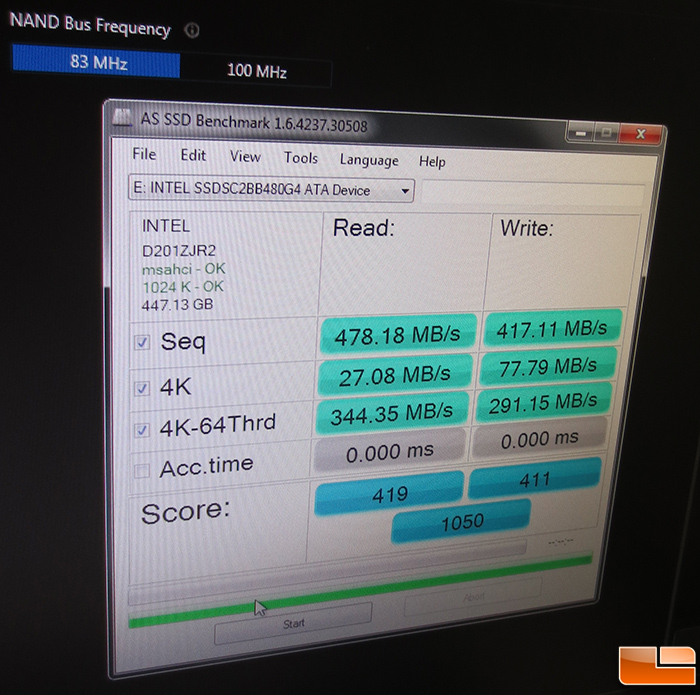 Running the AS SSD benchmark with the controller speed increased to 625MHz and the NAND Flash at 83MHz we saw the SSD performance go up. The sequential read jumped to 478.18MB/s from 474.27MB/s and the sequential write jumped to 417.11MB/s. The overall score went from 918 to 1050, which is a performance improvement of about 14% according to AS SSD in the overall score by just bumping up the clock speed of the controller. This isn’t huge gains, but we aren’t done yet. 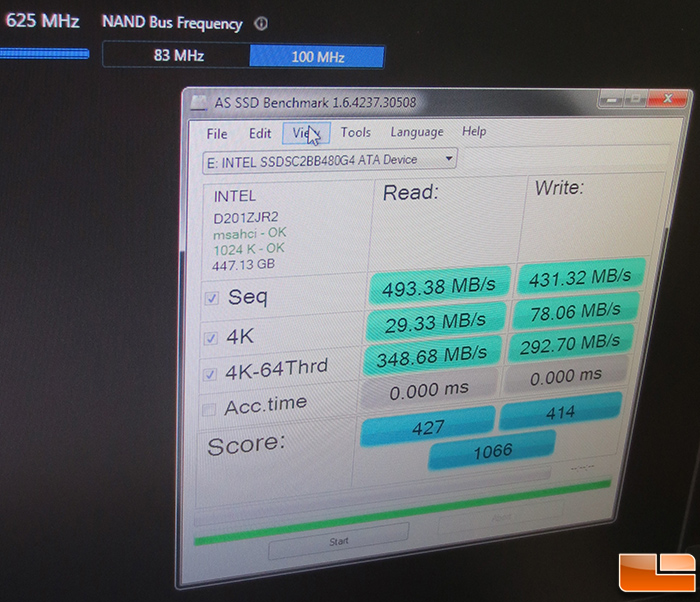 This time around Intel is showing the performance with all the settings increased. The SSD controller is running at 625MHz and the NAND speed has been increased to 100MHz versus the default of 83MHz. The performance went up considerably more than the controller alone. The sequential read increased to 493.38MB/s from the default of 474.27MB/s, a jump of 4%. The sequential write speed saw a much better gain jumping to 431.32MB/s from 400.82MB/s, a gain of nearly 8%. The overall AS SSD score went from 918 to 1066, which is a performance gain of 16.1%. 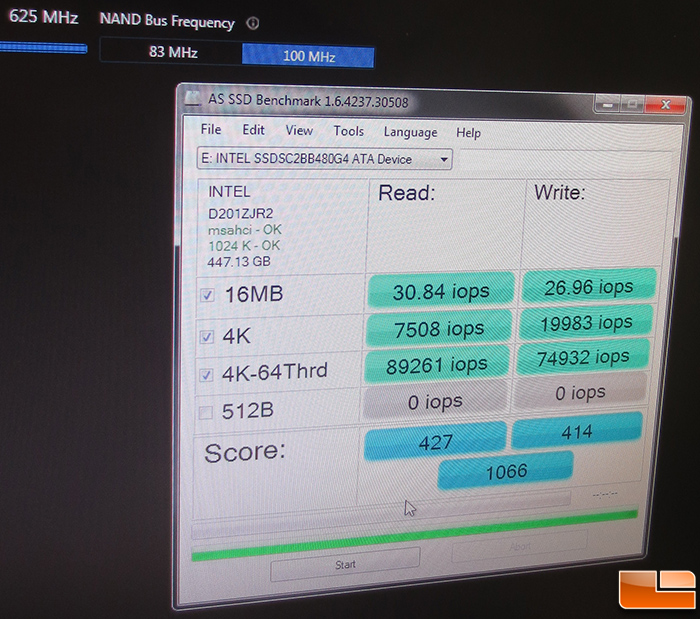 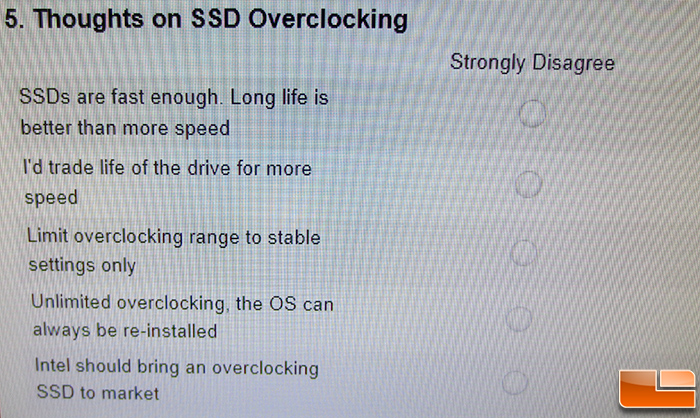 One of the suggestions that Legit Reviews made to Intel during the presentation this evening was to include some backup software. Intel will be charging a premium for overclockable SSDs, so if they included backup software there would be no excuse to lose your data. The one that gets me though, is: I’d trade life of the drive for more speed. The gains that we saw during the demo were certainly an improvement, but is it enough to sacrifice the life of the drive, I suppose it depends on how much life of the drive we would lose. We asked Intel about that and their response was that it is still being determined. If you’re looking for longevity from your system, you’re probably not doing any overclocking, at least nothing extreme. Ultimately overclocking creates more heat and wear and tear on the components and it’s likely that will be the case with SSD Overclocking as well. It will be interesting to see if this gains any traction if it ever comes to market, which is still up in the air at this point!

There is a lot about this that may change before SSD overclocking ever hits the market, if it ever does. Intel is currently testing the waters at PAX right now with the idea of overclocking SSDs. If it does hit the market, you can bet we will get our hands on the hardware and see just how far we can push the SSD before it starts glowing, then we may push it even further! By that point though, there are a number of things that will quite possibly change. Only time will tell. Be sure to let us know what you think of Intel offering up some SSD Overclocking goodness in the future. Is this something that you’re going to be looking forward to?