During the opening keynote speach Intel CEO Paul Otellini discussed in some detail the company?s plan for delivering the industry?s first quad core processors for PCs and high-volume servers. The first processor, targeted at gamers and content creators, will be shipped in November and be called the Intel Core 2 Extreme quad-core processor. As we previously reported this morning the full name of this processor will likely be the Intel Core 2 Extreme processor QX6700. 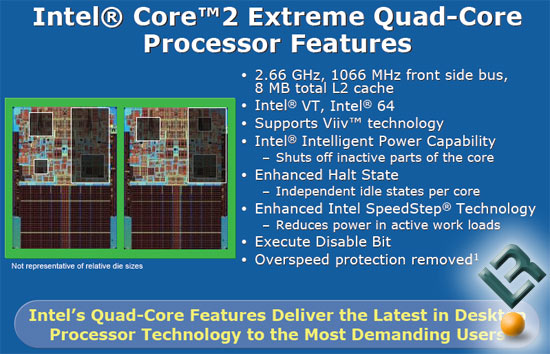 It will feature a dramatic 70 percent performance improvement over today?s Intel Core 2 Extreme processor, which is a heck of a difference if you ask us. In July of this year Intel released the Core 2 Duo desktop processor family and those delivered 40 percent more performance! Otellini went on to say that the other (non-Extreme edition) mainstream quad-core processors will be shipped in the first quarter of 2007 and will be known as the Intel Core 2 Quad processor. For servers, the Quad-Core Intel Xeon processor 5300 series brand for dual processor servers will be shipped this year, and a new low-power 50-watt Quad-Core Intel Xeon processor L5310 for blade servers that will be shipped in the first quarter of 2007. 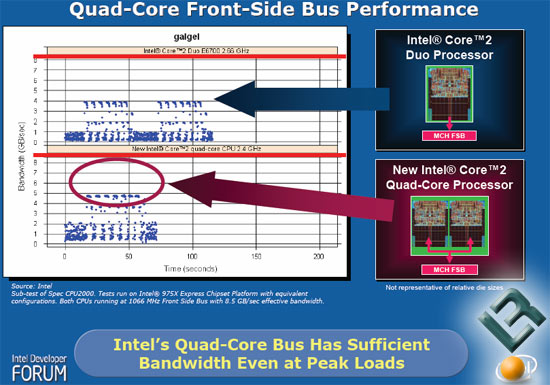 We thought we’d include this front-side bus performance slide as it shows where some of the performance increases are coming from.  It was explained to Legit Reviews that one reason the Intel Core 2 Quad processors perform so well is that the additional cores actually increase the bandwidth speed on the Front Side Bus even those the frequency remains unchanged at 1066MHz. Intel ran the benchmark SPEC CPU2000 and focused on the test 178.galgel to prove their point. They showed those attending IDF that FSB performance bandwidth is greatly improved even though it’s run on a 2.4GHz Intel Core 2 Quad processor versus the faster clocked Intel Core 2 Duo E6700 at 2.66GHz. In the above benchmark the time in seconds was cut nearly in half to complete the benchmark. 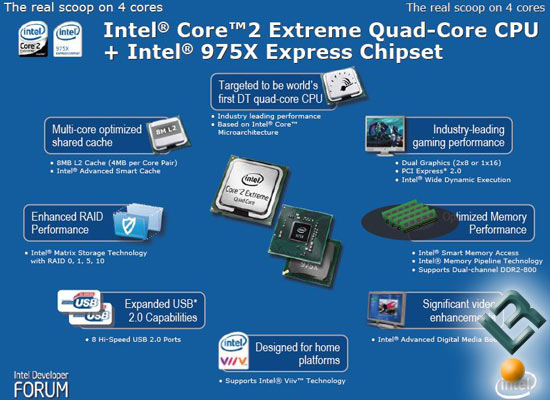 Intel is still showing that the 975X Express chipset is the perfect match for their quad-core processors and many of the demonstrations at IDF were run on Intel D975XBX2 motherboards. Intel has been pretty quiet about their Intel D975XBX2 motherboard, but for those that don’t know it’s the updated version of their popular D975XBX enthusiast desktop board.  While the board has been rumored for months on the internet the power point slide below is the first public mention that we have seen by Intel. From what Intel has told us here at IDF the new D975XBX2 has a couple new features that our readers would really enjoy.  The first being native support for 1333MHz FSB processors and the second being improved voltage options for everything on the board, but mainly on the memory. 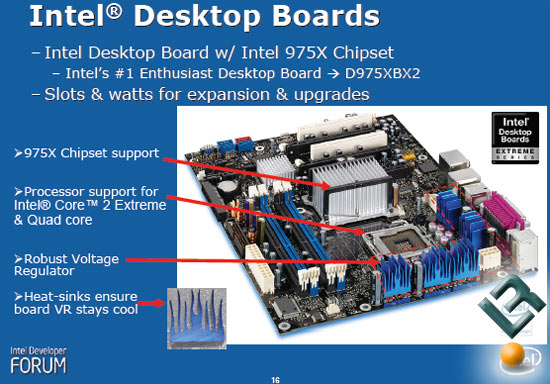 That’s it for now here from IDF.  It’s only lunch now and with meetings and briefings on my shedule from now till 10pm I’m bound to dig up some more good stuff.