When things are going good companies like to brag and tout their stuff and that is exactly what Intel is doing tonight. With the embargo lifted on Intel’s new ‘High-k + Metal Gate Transistor Breakthrough’ we can now talk about how Intel is now able to ramp up 45nm production for processors that will be coming out later this year on the mobile, desktop and server families.

Intel is pleased that the ‘law’ Gordon E. Moore came up with in 1965 is still holding true 42 years later now that we have entered in 2007. Back in 1965 Moore saw that the number of transistors on an integrated circuit doubles every 24 months. For those that have not seen the April 19th, 1965 Electronics Magazine copy here is what was said:

“The complexity for minimum component costs has increased at a rate of roughly a factor of two per year … Certainly over the short term this rate can be expected to continue, if not to increase. Over the longer term, the rate of increase is a bit more uncertain, although there is no reason to believe it will not remain nearly constant for at least 10 years. That means by 1975, the number of components per integrated circuit for minimum cost will be 65,000. I believe that such a large circuit can be built on a single wafer.”

To keep up with Moore’s Law Intel has had to keep shrinking the size of a processors core and has recently been able to produce processors on the 45nm process thanks to improvements in the way transistor gates have been made. 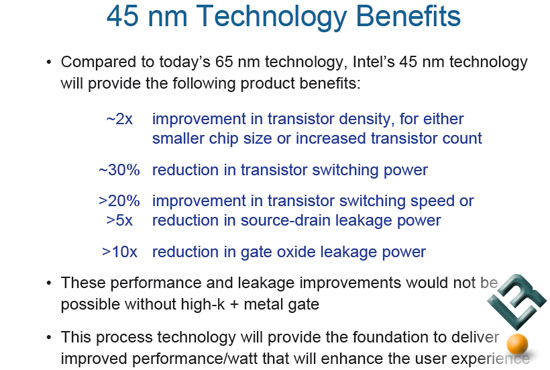 Compared to Intel’s current 65nm process the 45nm process they moving over to is said to double the transistor density, while also improving leakage and performance levels.  The performance and leakage improvements are due to the fact that Intel has now successfully developed a method to produce high-k + metal gate transistors. 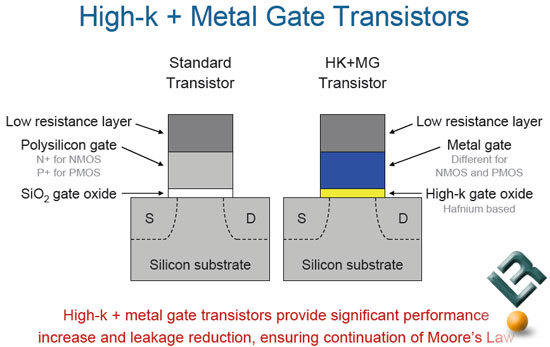 Not much has changed over the years when it comes to transistors, but that is no longer true now that high-k + metal gate transistors have been shown to work in real life. Intel has had working high-k + metal gate transistors since 2003, but just recently has been able to implement the technology with the 45nm manufacturing process that will ramp up later this year.  The ‘new’ parts of this transistor are the gate dielectric now consists of a ‘high-k’ material and the gate electrode itself is now made of metal.  By converting SiO2 gate dielectric to high-k it allows thickening the dielectric layer while also increasing the gate field effect resulting in increased “on”current, decreased “off”current and significantly decreased gate leakage. 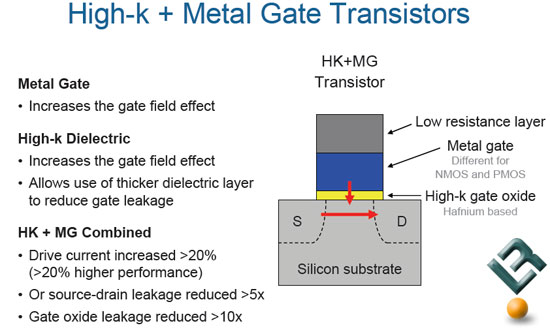 By moving from polysilicon gate transistors to metal gate transistors Intel has been able to improve the drive current by greater than 20% and has significantly reduced leakage.  After hearing of the news of the new transistor, Intel co-founder Gordon Moore made the following statement:

Now that we have covered the technical aspect of the high-k + metal gate transistors that make 45nm processor a reality we can see what this means for consumers in the second half of this year.