Intel has finally launched their 5th Generation Core ‘Broadwell’ processors that for socketed desktop and laptop platforms! Intel already has Core M and Broadwell-U processors on the market built using basically the same 14nm manufacturing process and architecture, but they had to stagger the complete processor release due to rumored yield issues that caused production delays. Moving to the 14nm process is no easy feat, but Intel obviously has it down and finally is able to offer the delayed desktop versions!

Broadwell 14nm processors are basically the die shrink of Haswell 22nm processors with some performance tweaks here and there. For those familiar with Intel’s tick-tock product release strategy, this would be considered a tick. The good news is that Intel Broadwell processors will be able to be used in all Intel 9 series boards after a quick UEFI/BIOS update, so there are hundreds of motherbaords on the market that can take advantage of Broadwell CPUs. The die shrink means that the size will be smaller and will offer lower power consumption. Intel used some of extra space and power headroom to shoehorn in Intel Iris Pro Graphics for the very first time on an socketed LGA processor. This means the Intel Broadwell offers unprecedented graphics performance!

Today, Intel is launching ten different Broadwell based CPU SKUs, five are 47W laptop parts and five are 65W desktop processors. If you look closely at the slide above you’ll see that only two are socketed (LGA) processors and the rest are soldered (BGA) parts. All but one feature Intel Iris Pro integrated graphics.

Only two Broadwell-C processors are socketed (LGA) desktop parts and they the Core i7-5775C and the Core i5-5675C. Those are the two processors that we are going to focus on for the remainder of this article. Both of these processors are fully unlocked and are the only choice for DIY system builders that are looking for a processor they can use on a motherboard of their choice.  Intel’s flagship 5th generation desktop processor is the Core i7-5775C that is priced at $366.  This quad-core processor with Hyper Threading processor comes with a base core clock of 3.3 GHz and 3.7 GHz turbo frequency. The processor has 6 MB of shared L3 cache, dual-channel DDR3 memory support and Intel Iris Pro 6200 Graphics.

These clock speeds are lower than Intel’s highest-end unlocked Haswell parts, so if you are looking for raw CPU performance the Haswell processors are still the best choice. The Intel Core i7-4790K Devil’s Canyon ‘Haswell’ processor has a base clock of 4.0 GHz with a max turbo frequency of 4.4GHz for example. If you are worried about graphics performance the two new Broadwell socketed parts might be viable options, but for those that could care less about integrated graphics Broadwell desktop CPUs might not be that impressive as they don’t bring the performance gains that some were hopeful for. So, don’t run out and buy a Core i7-5775C without making sure there will be performance gains as in many cases CPU performance will be lower. 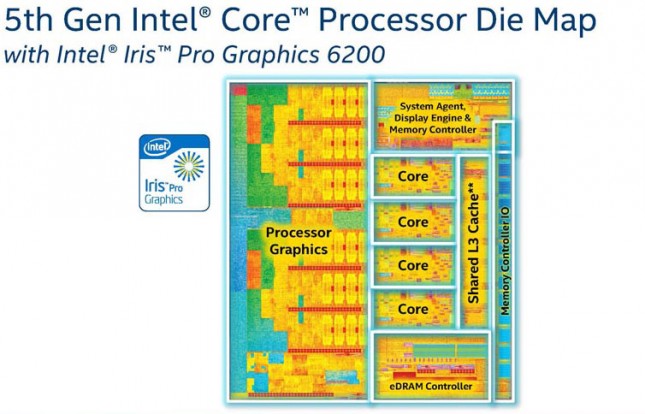 Intel Iris Pro 6200 graphics is comprised of 48 Execution Units and 128 MB of eDRAM (L4) cache and 128-bit memory interface to provide the best gaming and video encoding ever seen on a socketed processor. You can see the eDRAM controller below the four cores in the image above. Intel has devoted the majority of the Broadwell CPU die area to the graphics processor and the eDRAM for the graphics! 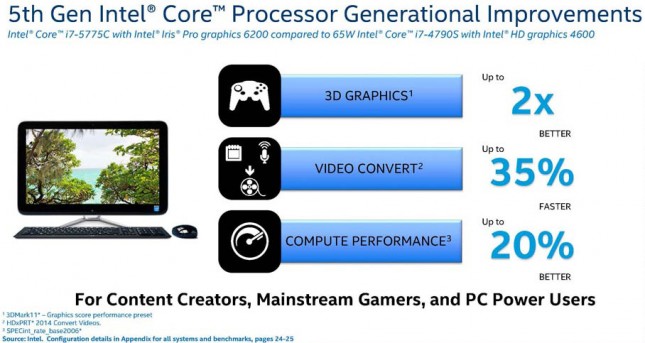 The improvements in the graphics department will be welcomed by anyone building a PC now as enthusiasts know that 4K Ultra HD displays are coming down in price quick and it is wise to invest in a CPU with better integrated graphics than one that doesn’t if they won’t be using a discrete graphics card. 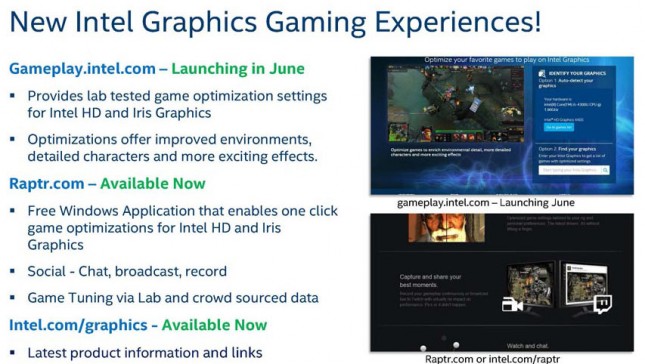 Intel is loving the extra gaming performance that they are able to offer consumers and is starting to offer more support for gamers. Intel plans on launched gameplay.intel.com this month with lab-tested optimization settings for those with Intel HD and Iris Graphics that is worth checking out.

Hopefully, Legit Reviews will get an Intel Core i7-5775C or Intel Core i5-5675C processor out to play with to see how it performs. We are crossing our fingers that we get it quick as we are on the verge of Intel Skylake processors and the Intel 100 series of chipsets that are due out later this year. That platform will be a tock in the product cycle and there will be a new platform that supports DDR4 memory and there will also be a new CPU socket. Broadwell appears to be the end of the road for Intel LGA1150!