The folks over at Benchlife have posted up a pair of slides and some information on Intel’s upcoming Kaby Lake processors that will succeed Skylake. It appears that Intel will be releasing the Kaby Lake processor series with the upcoming 200 series of chipsets. These slides are the first real details that we’ve seen for the new platform that will be replacing Skylake and the Intel 100 Series (Z170, H170 and Q170). The slide says that Intel will be increasing the I/O performance and flexibility of the chipset, which is common sense. It looks like Intel will be increasing the number of PCIe 3.0 lanes from 20 on the 100 series to 24 PCIe 3.0 lanes on the 200 series. The 200 series chipset also supports 10 USB 3.0 ports, Intel Optane technology, Intel RST PCIe Storage x4 Gen3 and Intel Rapid Storage Technology 15. Intel Optane technology support is great to see as we are really excited to see how Intel/Micron 3D XPoint memory along with Intel’s controller and firmware will perform in the next generation PCIe NVMe SSDs! 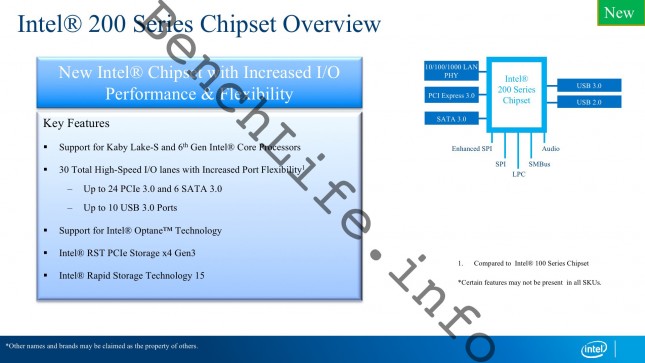 When it comes the Kaby Lake processors there is said to be increased performance over Skylake along with 10-bit HEVC/VP9 decode and 5K support. Both Intel 100 series and 200 series boards feature the LGA1151 socket, so Skylake processors should be compatible on the Intel 200 series motherboards and it appears that Kaby Lake is supported on the 100 series as well! This all looks and sounds good, if these slides are real! 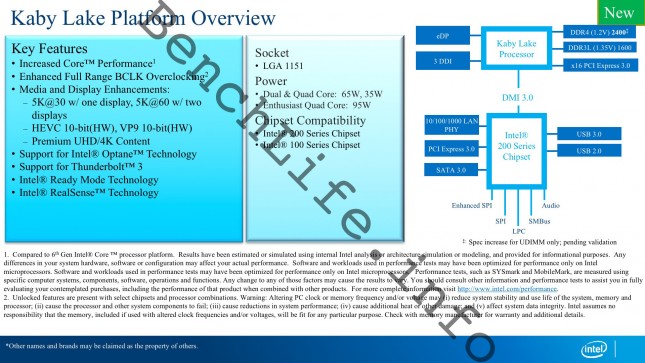