When the Unified Extensible Firmware Interface (UEFI) specification became popular on desktop motherboards one of the last companies to make the switch to this new standard was Gigabyte. Gigabyte did not feel the need to quickly adopt the UEFI standard and in 2011 it caught up to them. It was around that time that 3TB hard drives were introduced and drives greater than 2.2TB were not bootable with Gigabyte Intel 6-series chipsets due to the BIOS they were using. That is because at the time, Gigabyte’s Intel 6-series motherboards still used the old-school Award BIOS. Towards the end of January 2011, Gigabyte announced that they were coming up with something called Hybrid EFI Technology.

Gigabyte Hybrid EFI Technology is a fancy term that the company came up with that sounds good, but it was not a standard EFI implementation. What Gigabyte did was take the Award BIOS they had been using for years and incorporate an EFI bootloader on it that would enable support for hard drives larger than 2.2TB. If you were using a hard drive over 2.2TB on Windows 7 x64, the Gigabyte Hybrid EFI BIOS worked great and you didn’t need any software. If you used any other version of Windows you needed to use a Gigabyte software utility to use the full capacity of your hard drives over 2.2TB.

So, the GIGABYTE Hybrid EFI Technology basically just ‘patched’ the old Award BIOS that Gigabyte was using. This was the best way the engineers could come up with to quickly solve the problem at hand. Gigabyte then touted that they then offered EFI functionality and solved the hard drive situation by coming up with the terms ‘Hybrid EFI Technology’ and ‘DualBIOS 3TB+ HDD Support’ to send the marketing message home. Many review sites and consumers talked about the Gigabyte BIOS issues and it was a hot topic in 2011. Even companies like ASUS took swings at Gigabyte by putting comments like this in press releases:

“UEFI BIOS allows a user to control and adjust their motherboard settings through the use of a mouse-enabled interface for a superior user-friendly experience that BIOS and Hybrid-EFI solutions do not offer.” – ASUS PR from May 30th, 2011

For the past year, Gigabyte’s Hybrid EFI Technology saved the day and the rants and gripes about the companies BIOS issues died down. On April 9th 2012, Gigabyte launched their Intel 7 Series motherboards for 3rd generation Intel Core processors (Ivy Bridge) and with that they introduced a true UEFI BIOS for the socket LGA1155 platforms. That was a big deal for Gigabyte as the company was able to retire their Hybrid EFI Technology and move on to technology that was on par with their competition. Gigabyte could finally put the Award BIOS in the past right?

Wrong Answer! When Intel launched their 22nm Ivy Bridge processors this week, they announced that they were compatible with their older 6 series chipsets. If you read the fine print though, Ivy Bridge is only supported on H61, H67, P67 and Z68 chipsets after a BIOS flash. This is great news for consumers as if you want to upgrade to an Intel Core i7-3770K or any of the other Ivy Bridge offerings you can do so without switching boards! 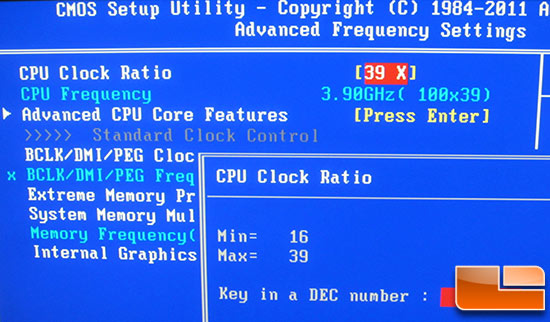 We grabbed the Gigabyte GA-Z68X-UD3H-B3 motherboard, updated the BIOS to the latest version (F12), and dropped a brand new Intel Core i7-3770K processor (our review) into the board. Everything worked great with the default BIOS settings, but when we went to overclock the processor we noticed that the CPU Clock Ratio could go no higher than turbo clock ratio of 39. You have to raise the CPU ratio in order to get the most from these processors, so by having it locked at 39 is a deal breaker. 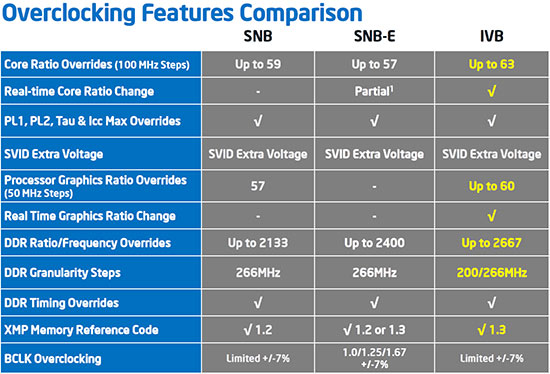 Knowing that the Intel Core i7-3770K is an unlocked processor that should go up a CPU multiplier of 63, we knew something was wrong. We reached out to Gigabyte on the day Intel Ivy Bridge processors launched to let them know of the issue and they just got back to us today with this answer:

“For the locked multiplier issue, to be honest, it is the Award BIOS limitation for our Z68 boards to Overclock with IVB K series CPU. It will be locked at 39.” – Gigabyte USA

We have to give Gigabyte some credit here as they were honest with us and told us that there is a BIOS limitation that they are aware of and that anyone that has a Gigabyte P67 or Z68 motherboard won’t be able to unlock and overclock an Intel Ivy Bridge processor (The Intel H61 and H67 chipsets have limited overclocking due to chipset limitations, so those two chipsets aren’t that critical.). The newer Gigabyte Z77 motherboards use a new UEFI BIOS that works great with both Ivy Bridge and Sandy Bridge processors and it overclocks with ease as we showed you in our Gigabyte Z77X-UD5H motherboard review here. So, this is a BIOS issue and once again the older Award BIOS has come back to haunt Gigabyte.

“We are aware of the situation that limits some overclocking settings on GIGABYTE 6 series motherboards and 3rd generation Intel (Ivy Bridge) CPUs. We are currently developing a new BIOS for these boards to resolve this issue and plan to make them available in the next week or two.” – GIGABYTE HQ in Taiwan

Gigabyte Taiwan informed us that they are working on developing a new BIOS for the Gigabyte 6 series motherboards that will fix this issue. Could Gigabyte finally be releasing a UEFI BIOS for these boards? We can only hope so!

Gigabyte plans on having a solution out, but for now their boards are not overclocker friendly with Ivy Bridge and we feel that this a big deal for overclockers that have the following boards.

We checked out the Gigabyte website and found that the company released an astonishing 32 motherboard models that used the Intel P67 and Z68 chipsets. This means that there are a large number of enthusiasts and overclockers out there that won’t be able to unlock the new Intel Ivy Bridge ‘K’ series processors that will be going on sale next week for the very first time. We feel it is our obligation to tell you what is going on before the processors go on sale as this is an issue that hasn’t gotten any media attention from what we can tell.

We have been in contact with Intel and Gigabyte and after talking with the right people in both the United States and Taiwan we feel that Gigabyte can come up with another ‘patch’ for the Award BIOS that resolves this issue, but right now they don’t have one available. Gigabyte might also be working on releasing a UEFI BIOS for their 6-series motherboards, so it will be interesting to see if they can fix it and what they will do. Whether it’s fixed by a newer BIOS version that has a patch or an entirely new UEFI BIOS solution all we know is that Gigabyte motherboard owners will be happy.

While working on this article we spoke to a number of companies and found out that getting Ivy Bridge running properly on all of the older 6-series motherboards was more tricky than first thought. Intel said that even they are going through some growing pains right now. The Intel DP67BGB3 (Burrage) and DZ68ZV (Zanesville) motherboards are 100% ready for Ivy Bridge processors once they are flashed with the latest BIOS, but other boards were not that fortunate. For example the Intel DP67BA (Buffalo Flats) and DP67DE (Deer Flats) motherboards have been having some issues. These two UEFI boards both support Ivy Bridge processors, but they don’t support overclocking now. Intel is working on correcting this and hopes to have a fix real soon.

If you plan on updating your existing Intel Z68 or P67 motherboard with an Ivy Bridge processor that is unlocked and want to overclock, we highly advise that you make sure there are no issues with your board before doing so. Ivy Bridge support has been great on the Intel 6-series motherboards, but when it comes to overclocking we are seeing BIOS issues on some boards. We highly doubt that Gigabyte is going to be the only motherboard manufacturer that is having issues, but Gigabyte is going to be taking the brunt of it though as their entire 6-series lineup doesn’t support multiplier adjustments on Ivy Bridge K-series processors right now.