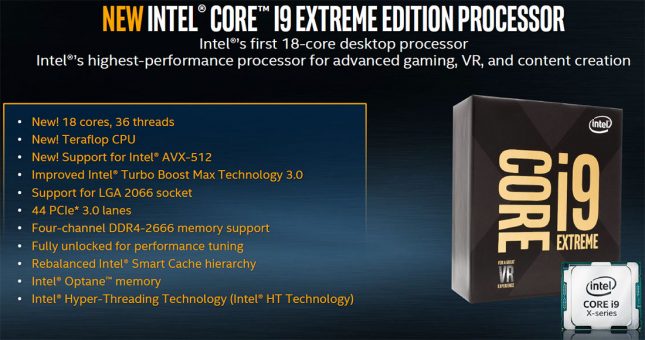 Intel improved Turbo Boost Max Technology 3.0 by utilizing the two best cores on the processor and this means that you get a performance improvement in both single- and dual-core applications now. Two is obviously better than one, so Skylake-X processors will run at higher clock speeds at single- and dual-core workloads than ever before.

All Intel Core X-Series processors are unlocked and Intel is continuing to embrace the overclocking community with per-core overclocking, per-core voltage adjustments and allowing for quad-channel DDT4 memory clocking over 2666MHz. The new overclocking features for the Basin Falls platform would be Intel Advanced Vector Extension-512 (AVX-512) ratio offset, Memory controller trim voltage control and PEG/DMI overclocking. Intel is also still offering the Peformance Tuning Protection Plan for those that are willing to pay extra to warranty their processor and will be updating the Intel XTU utility to support this platform. 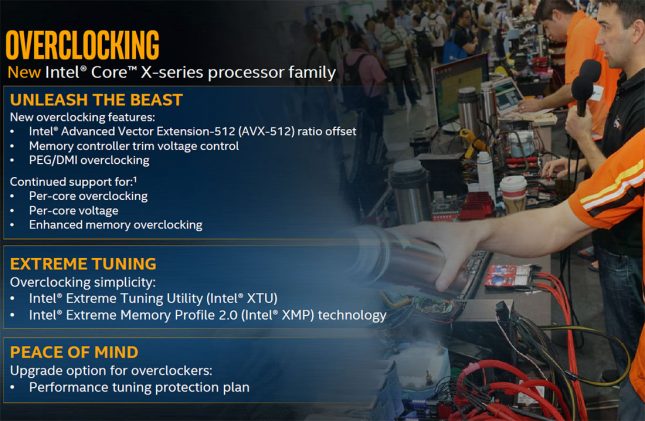 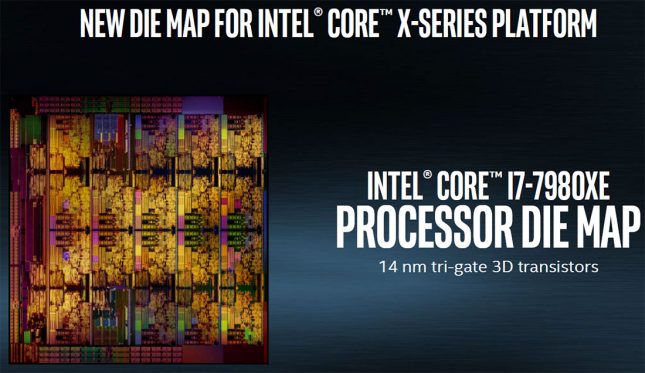 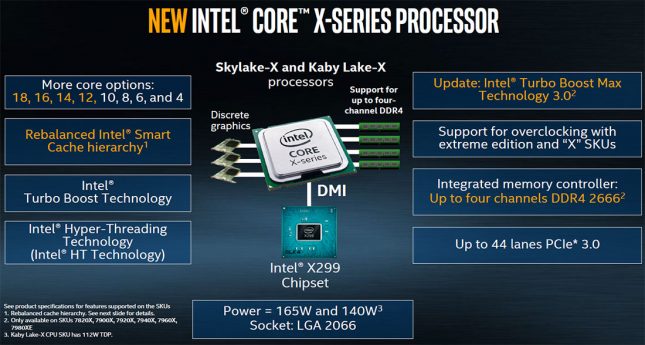 Intel X299 boards should be coming out at the same time as Skylake-X and Kaby Lake-X processors hit store shelves and from what we have seen so far they look pretty damn good. The Intel X299 chipset offers up to 24 PCIe 3.0 lanes versus just the 8 lanes of PCIe 2.0 that was on the Intel X99 chipset. This is a huge improvement and with 24 PCIe 3.0 lanes on the chipset and up to 44 on the Skylake-X processor it means you can have up to 68 PCIe 3.0 lanes on this platform for insane I/O capabilities. PCIe lanes left unused by graphics cards can be devoted to storage with Intel VROC technology, which combines multiple M.2 SSDs in a bootable RAID array connected directly to the CPU. An unknown number of PCIe drives can run in parallel to deliver staggering throughput and fast access for system drives. The Intel X299 platform also support Intel’s Optane Memory, which provides a solid-state cache to accelerate other storage devices.

AMD fired off some shots at Intel with Ryzen 7 and now Threadripper, but Intel has clearly responded with what looks like a solid platform with impressive processors. This sets the stage for a very interesting summer if you are looking for a new high-end desktop computer. We can’t wait to get our hands on some samples to see how they perform!