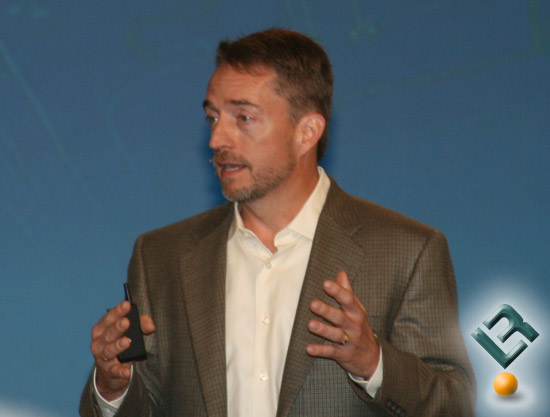 Pat Gelsinger was on stage and kicked off IDF 2008 by giving the audience an overview of this year’s show. Pat Gelsinger is going to talk about Digital Enterprise and Mobility this afternoon, so he handed things over to former CEO Craig Barrett to get the ball rolling. 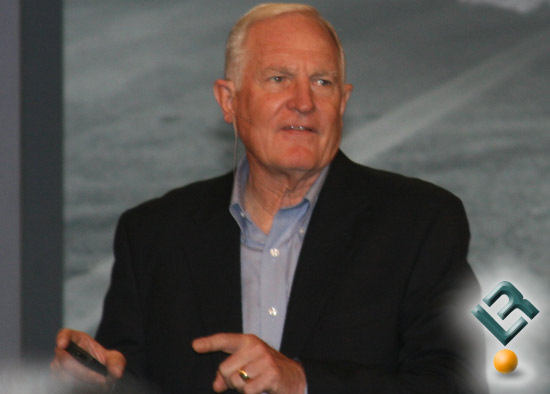 Craig Barrett has traveling around to roughly 60 countries in all continents except antarctica over the past two years. His goal has been to spread technology across the world by giving ‘seeds’ of technology and help to those people that he visits. He slammed the current US government by saying they don’t recognize that investing in and supporting technology is key to our future. He used the example that the tax credit for R&D research in the US expired and was not renewed. He went on to detail that the future is dependent on a competitive workforce and that can only be had if smart people (education) and smart ideas (R&D) come together. He made notes how America is falling behind in terms of both education and R&D and how we need to change this.

Criag Barrett then went on to show a number of innovators and their new ideas.  First up showed how the Nintendo Wii’s remote game controller can be adapted to control a computer on a screen, which might be key for developing white boards on a very small budget. Johnny Chung Lee, who developed the ‘hack, showed a demo using the technology that impressed the audience and performed ‘multi-touch’ that allowed him to pivot a 3-D image on the electronic white board. To sum things up his free software along with a Nintendo Wii remote and some Radio Shack parts and you can have a white board for just $50. Johnny Chung Lee used dry erase markers with the guts pulled out and infrared LEDs dropped in to do the presentation. Several more presentations go on like the one on Kiva.org, a nonprofit organization that makes it easy to use the Internet to make “micro finance” loans as small as $25 to people in the developing world. It is making loans every 30 seconds and most of them go to women (and they return the most profit) thanks to the internet and new technology in developing countries.

Near the closing of the opening keynote here at the Intel Developer Forum, Intel chairman Craig Barrett announced four $100,000 prizes that will be awarded next year. An inventor can visit IntelChallenge.com and submit his/her idea in one of four areas: healthcare, economic development, education, and the environment. The money will be used to implement the idea, not as a reward to the person who wins.

The inspiration behind this contest is from a conference on IT in Kuala Lumpur that Craig Barrett attended.  One night he came back to his hotel one night to see a message left next to his pillow: “A small deed done is better than a great deed planned.” “We have the opportunity to a number of great small deeds,” Barrett said. This is Intel’s way of helping out and advancing innovation.

We will have more coverage as the show goes on, but for now we must leave you to bring you more coverage. The keynote this morning didn’t have any ‘hardware’ in it for the most part and other than one mention or Moore’s Law it was all about innovation.

We leave you with this picture: 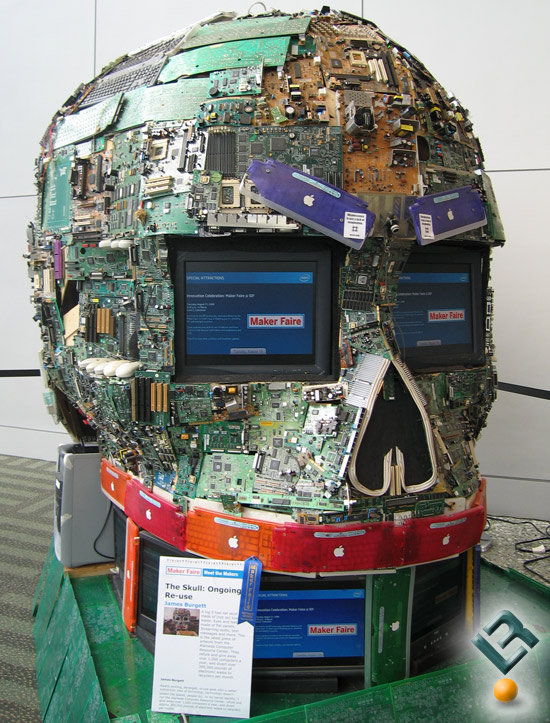 The image above is old computer hardware that was recycled into art, if you want to call it that.  Intel launched Skulltrail at the last IDF, too bad as this would have been perfect for the launch!