Is 144GB of Memory Enough For Your Needs?

Intel is demonstrating a server with 144GB of memory using Hynix DDR3 R-DIMMs and Meta SDRAM technology in the Advanced Technology Zone here at IDF this week. MetaRAM just announced their second-generation chipset that supports DDR3 memory today and we happened to walk by the demo and saw it in action. If my memory serves me correctly MetaRAM was created by ex-AMD employee and was designed to allows computers to quadruple their memory capacity (RAM) with minimal cost, lower power consumption and higher performance to boot. This is done by placing a new chipset called the MetaRAM between the memory controller and the DRAM. Processor speeds double about every 18 months, versus the 36 months it generally takes for memory capacity to double. With technology like MetaRAM it is now possible for memory capacity increases to be quicker, back along the lines of processors. 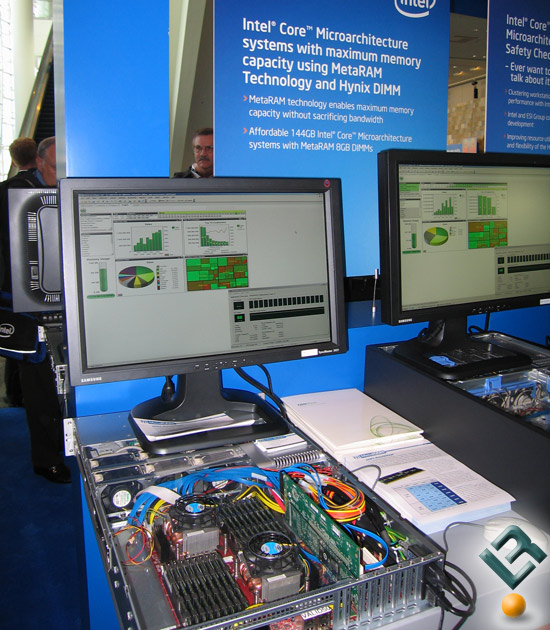 Each of the 18 memory modules in the server platform are 8GB (HMT31GR7AER4C-GC) 2-rank DIMMs by Hynix. Using these modules consumers can triple DDR3 memory capacity in servers and workstations, enabling the world’s highest memory capacity per channel without degrading performance. DDR3 MetaRAM technology enables Hynix to introduce cost-effective, high capacity R-DIMMs by using mainstream 1 gigabit (Gb) DRAMs. If this isn’t enough it turns out that Hynix is working with MetaRAM and Intel to successfully develop the world’s first 16GB DDR3 module, which is shown on the next page. 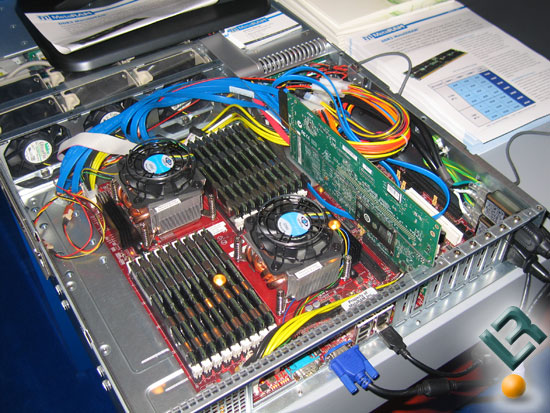 Here is a closer look at the system that was up and running at IDF. If you were wanting a little more than 144GB then read on!