11th Gen Intel Core processors were announced on March 16th, but it appears that Intel wanted to talk more about their Adaptive Boost Technology. The sent the tech press this slide about the technology at midnight to better show the feature that comes on 11th Gen Intel Core i9 K and KF sku processors. Intel Adaptive Boost Technology improves Rocket Lake-S performance on these skus by opportunistically enabling higher multi-core turbo clock frequencies. This feature is in addition to Turbo Boost 2.0/3.0 and the well-known Thermal Velocity Boost (TVB). 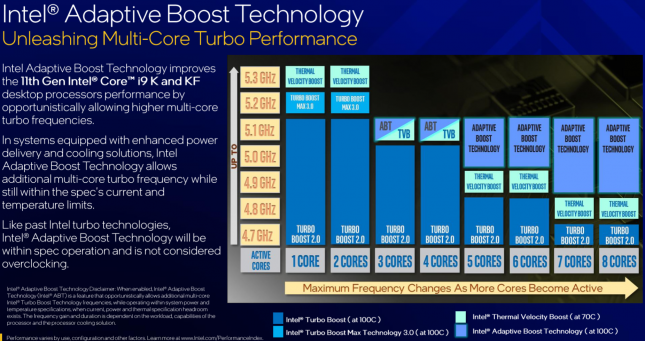 Intel Thermal Velocity Boost (Intel TVB) is similar as it is a feature that opportunistically and automatically increases clock frequency above single-core and multi-core Intel Turbo Boost Technology frequencies based on how much the processor is operating below its maximum temperature and whether turbo power budget is available. The frequency gain and duration is dependent on the workload, capabilities of the processor and the processor cooling solution. Intel TVB works in situations where the processor temperature is under 70C. Adaptive Boost Technology is different as it boost clocks speeds with CPU temperatures 100C if the chip is within current limits.

We don’t know if this will work on Intel 400 series chipsets, but we know it works on Intel 500 series boards as the feature is mentioned in the UEFI on some of the boards we have here for testing.

It might be time for Intel to come up with Turbo Boost 4.0 and simplify things for multi-core enhancement. It sounds like Intel is continuing to move away from fixed clocks for certain loads and moving over to something more dynamic like what AMD has done with PBO or Precision Boost.