Intel has posted up retail packaging images of their upcoming Coffee Lake desktop processor series! The side of the box confirms that these will be 6-core, 12-thread processors with Intel Turbo Boost Technology 2.0. The bad news is that it confirms the rumors that Intel’s 8th generation Core processors will not be supported on current generation Intel 200 series motherboards. The side of the box clearly states that an Intel 300 series chipset-based motherboard is needed. Many desktop enthusiasts were hopeful that Intel Coffee Lake would be compatible on existing motherboards, but that is not going to be the case. 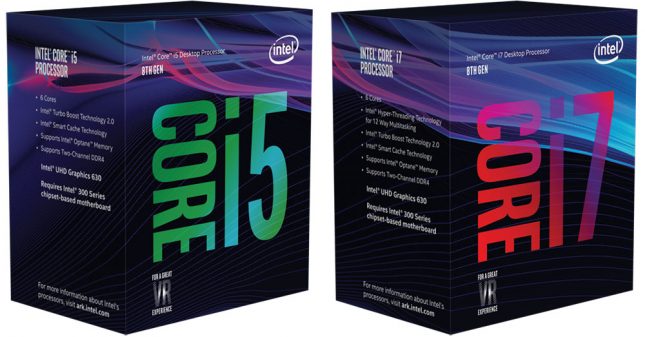 The images above came straight from the Intel landing pages for Intel Core i7 and Core i5 processors, so it looks like this finally puts the platform question to rest. It also confirms that Intel UHD Graphics 630 will be uses for these desktop parts.

Intel has already announced 8th Generation Core processors will be coming this fall, so hopefully we’ll have these new processors shortly!