Intel has finally lifted the embargo on their new 10th Gen Intel Core mobile H-series processors (codename Comet Lake H), that raise the bar for mobile gaming performance. Intel is super excited about this category, and now that the world is dealing with a global pandemic (COVID-19) it is a series of processors that allows people to get online to play some games, socialize while still following social distancing rules to keep one another safe.

The 10th Gen Intel Core mobile H-series processors consists of six 14nm parts and are offered in the usual Core i5, Core i7, and Core i9 performance classes. The core count on the Core i5 chips are 4-core, 8-thread and moving up to the Core i7 and Core i9 parts you’ll find 6-core, 12-thread and 8-core, 16-thread offerings.

The flagship model is the Intel Core i9-10980HK 8-core, 16-thread processor that features a 2.4 GHz base clock and a 5.3 GHz single core turbo clock. The Core i9 processor delivers the most speed and performance for gamers and content creators. One thing that is noteworthy is that four out of the six new processors are capable of reaching 5.0 GHz or higher on turbo clocks. All of these processors are 45 Watt parts, but the 10980HK can be configured up to 65W if the OEM desires to push the performance envelope.

Intel Thermal Velocity Boost (TVB) is only available on the Core i7 and Core i9 parts. TVB automatically increases clock frequency by up to 200 MHz if the processor temperature is 65C or lower and turbo power budget is available.

The new 10th-gen Core chips are designed to be paired with Intels 400-series mobile chipsets with the workhouse being the H470 chipset. There are up to 40 platform PCIe 3.0 lanes for expansion

Mobile gaming laptops is a category that’s been growing tremendously in the last couple of years, and that growth doesn’t appear to be slowing down. Intel recognizes that and will have over 100 designs coming out this year that use 10th Gen H-Series processors. Intel expects over 30 of the new gaming laptops will be in the thin and light category with chassis that are 20mm or less in thickness. You can expect Dell, Alienware, HP, Acer, Razer, Gigabyte, MSI, ASUS, Lenovo and others to be bringing 10th Gen Intel laptops to market in the weeks ahead.

Gaming laptops is one of Intel’s fastest refreshing categories as gamers usually keep a notebook for just two to three years before getting a new model since they want more performance for better gameplay and faster editing.

At the end of the day what are we talking about in terms of performance? Intel talked about performance benchmarks a bit with the new 10th Gen parts against a 3-year old laptop. Intel claimed that they were seeing a 31-44% improvement while gaming on the Intel Core i7-10730H versus the Intel Core i7-7700HQ. Impressive numbers, but also keep in mind that much of that is due to GPU improvements. 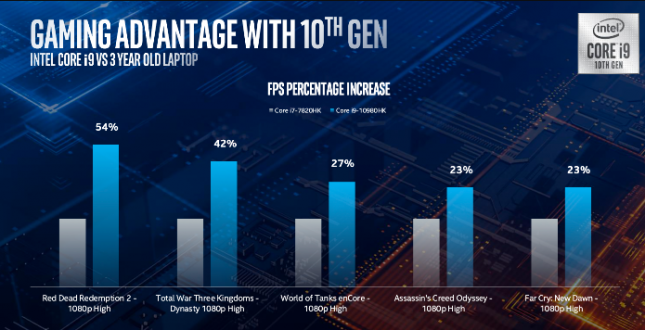 It will be interesting to see how the new Intel 10th Gen mobile processors are able to compete against AMD’s brand-new 7nm Zen 2-based Ryzen 4000 ‘Renoir’ processors that came out earlier this week!