Ingenuity Mars Helicopter Experiences An Anomaly On Its Sixth Flight

For most of the week, NASA was gearing up to conduct its sixth test flight of the Ingenuity Mars Helicopter. That flight happened recently, and the helicopter was able to survive an anomaly experienced during the flight. NASA says Ingenuity climbed to an altitude of 33 feet before translating 492 feet to the southwest at a ground speed of 9 mph.

At that point, Ingenuity was supposed to translate 49 feet to the south while taking images towards the West and then fly another 164 feet northeast and land. Telemetry from the flight shows that the first 150-meter leg of the flight went perfectly. However, towards the end of that leg, an issue occurred, and Ingenuity began adjusting its velocity and tilting back and forth in an oscillating pattern. 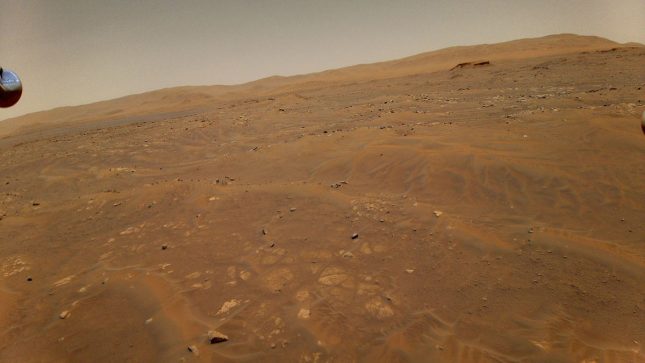 That behavior continued for the rest of the flight. However, Ingenuity was able to land safely. The helicopter’s sensors showed that it encountered roll and pitch excursions of more than 20 degrees, large control inputs, and spikes in power consumption. NASA also notes that 54 seconds into the flight, a glitch occurred in the pipeline of images being delivered by the navigation camera, causing a single image to be lost.

The glitch also resulted in all images after the lost one being delivered with inaccurate timestamps. This anomaly forced the helicopter to operate based on incorrect information about when the image was taken, resulting in inconsistencies that significantly degraded the information used to fly the helicopter.