It’s nearly impossible for device makers to keep their products from leaking early today, too many people on the inside want the attention that comes with leaking photos. Leaks are a good thing for fans as it gives an early look at what the devices will look like. A new image has leaked that claims to be the Xbox Series X.

The image shows the back of the device and the ports that the new console will include. We see an HDMI output on the back, ethernet, dual USB ports, optical out, what appears to be the power port, and an extra port in the center with a solid line over the top. 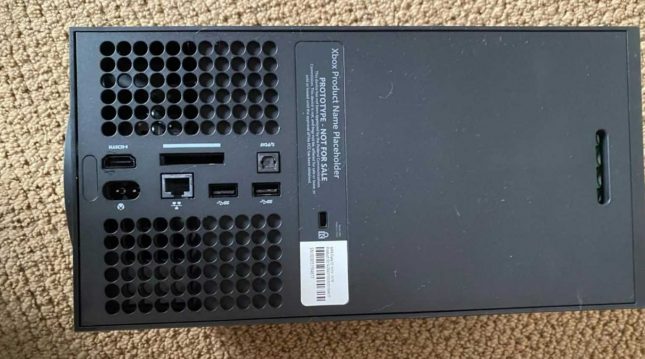 That extra port isn’t expected to make it to production hardware, as it is reportedly used for diagnostics for devs. The holes on each side of the ports are for air circulation. It appears that the back panel of the console is removable, Thurott.com figures this is for troubleshooting of prototype hardware.

One thing that the person who leaked the images has gone very wrong with is the serial number sticker that is clearly visible on the back. Microsoft will know who that hardware was assigned to, and things won’t go well for them.