With the popularity of notebooks continuing to rise it’s no wonder a number of gamers are moving over to mobile platforms to game on the go.  One of the most popular gaming notebooks is by far the Dell M1710, which we have used in reviews a number of times here on Legit Reviews. The Dell M1710 always got warm while gaming, but now that Intel has released the Core 2 Extreme Mobile Processor X7800 Processor and has embraced overclocking on notebooks, things have gotten a bit too hot when overclocked.  With processors ‘throttling’ while overclocked, something needed to be done, so Intel and Embraco teamed up to come up with a cooling solution that would prevent throttling and allow for even higher clock frequencies. 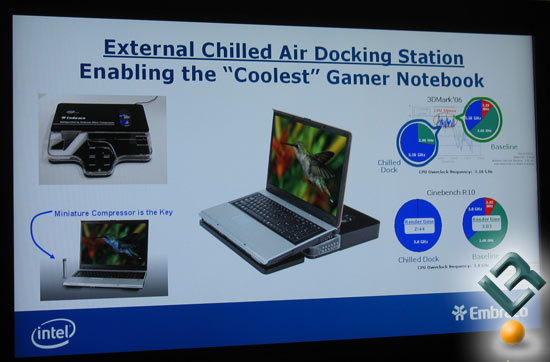 Little marketing material is available on this new product, but the one slide that was present dubbed the cooler the ‘External Chilled Air Docking Station’. 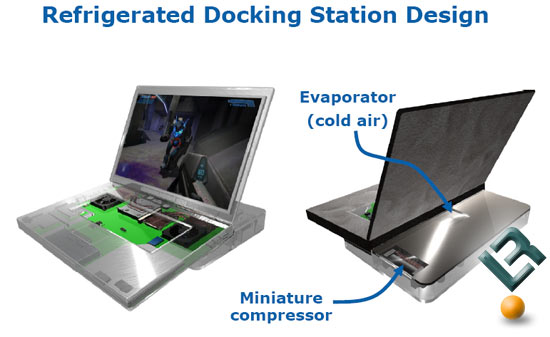 Inside is what we were told is the World’s smalled miniature compressor that cools the air before flowing into the bottom of the notebook. The air would then enter the notebook through the intake openings and the hardware inside would be able to run cooler thanks to the cold air. 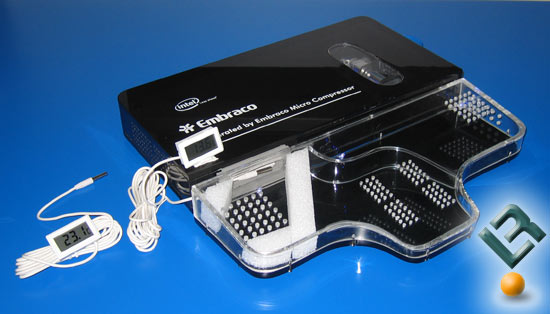 Here is a picture of a prototype Embraco cooler, which had thermal sensors showing the air temperature before and after the refrigeration process takes place.  The outside ambient temperature was 23.1C, while the temperature of the air coming out of the cooler was a chill 13.6C.  This is about a 41% reduction in ambient temperature which should drastically improve the thermals of the notebook. 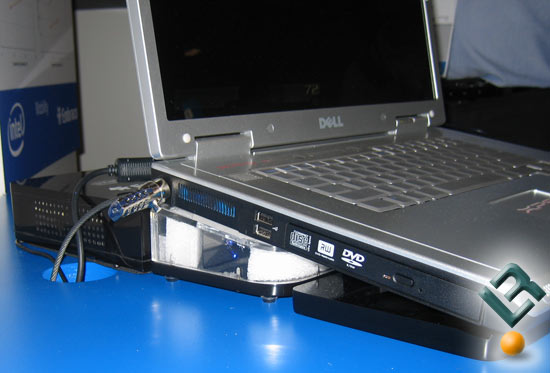 The Dell M1710 fits nicely atop the ‘External Chilled Air Docking Station’ and due to the simplistic design it will work with a number of different notebooks in the future – only the air ducts and vent holes will have to be changed to work on various brands of gaming notebooks. 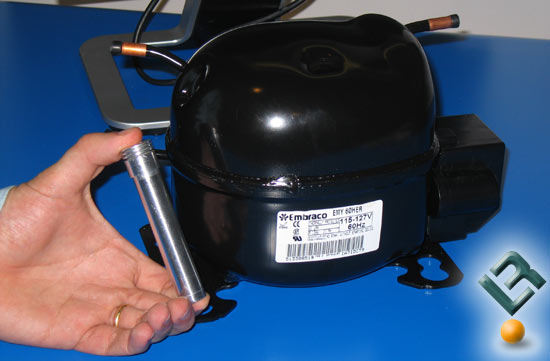 The small Embraco Micro Compressor is the key to ‘External Chilled Air Docking Station’, as without a compressor of this size the docking station would be too big for many. 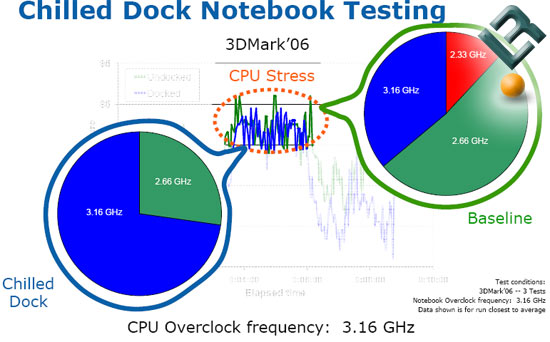 The test results they showed showed less throttling and as a result the benchmark scores on 3DMark06 and Cinebench R10 were higher. The docking station cooler works and it wouldn’t be possible if it wasn’t for the micro compressor that Embraco has desinged.

When it comes to pricing, we were told it should be in the ~$150 range, but pricing is not set, so that is just a rough estimate they came up with during our conversation.  The ‘External Chilled Air Docking Station’ by Intel and Embraco should be out just in time for the holidays this winter, so if you are suffering from a throttling notebook when you game, a solution is on the way – just don’t expect it to run on batteries.