The Intel Next Unit of Computing – NUC

Consumers have made it crystal clear that small form factor (SFF) computers are now desired since they reduce the space needed for a desktop computer. While no one will argue with how nice it is to have a small PC, it does limit what you can do in terms of expansion. If you are willing to give up the ability to expand, then you are going to be seeing some amazing SFF PC’s coming out later this year and into the foreseeable future. Some hardcore enthusiasts are worried that the move to these ultra SFF systems will create a ‘dumbing down’ of the of the household PC, but lets face it we are headed that way anyway. As system on chip (SoC) processor designs continue to increase, it looks like it could only be a matter of time until we live in a world of socket-less desktop PCs.

For those that follow the PC industry you might have heard of the “Next Unit of Computing” (NUC) mini-PC by none other than Intel. This is a SFF PC that takes things to the next level by using a 4-inch square motherboard stuffed into a tiny plastic case. Intel started designing this system over a year ago and it was originally aimed at the the kiosk and signage industries. As word about the little system started to spread, so did interest in the consumer market and now it could be soon available to consumers. 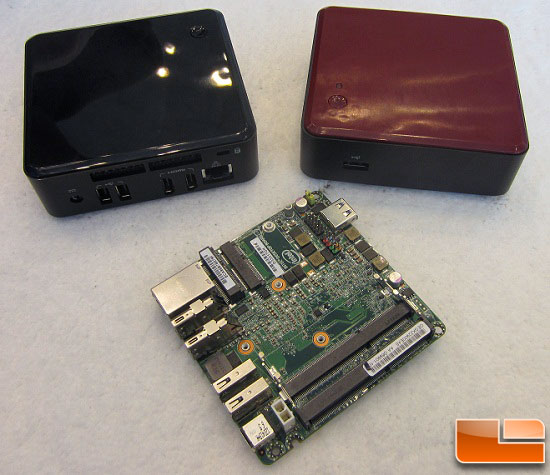 The Intel NUC has been powered by several processors over the past year, but this month at the Intel Developer Forum (IDF) we saw the latest NUC version that is powered by a Intel Core i3-3217U processor that has been soldered to the underside of the board. This is a 1.8 GHz dual-core ‘Ivy Bridge’ processor with Hyper-Threading that is rated at just 17 Watts! Intel plans on shipping the NUC in this current form for $399 starting in October 2012. This price might shock some people, but this isn’t a Raspberry Pi board with an ARM CPU/GPU for $35. The Intel Core i3-3217U processor has a tray price of $225, so over half the cost of this device is the 22nm processor! Factor in the mainboard, case, power adapter and packaging and you can see how the cost quickly rises to nearly $400. 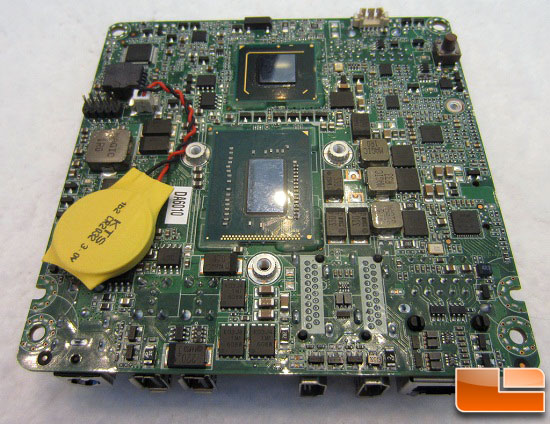 Here is a closer look at the bottom of the board with the Intel Core i3-3217U processor and the supporting Intel QS77 chipset. This processor contains Intel HD Graphics 4000, so it has the latest and greatest Intel GPU technology inside. There is a small fan and heatsink that keeps both the processor and chipset cool, so the NUC is actively cooled. At one point we heard that Intel had a Core i5 version of the NUC, but it appears that isn’t going to happen just yet. We hope that Intel is still considering having an Intel Core i5 version as that would be a powerful little system that fits in the palm of your hand! 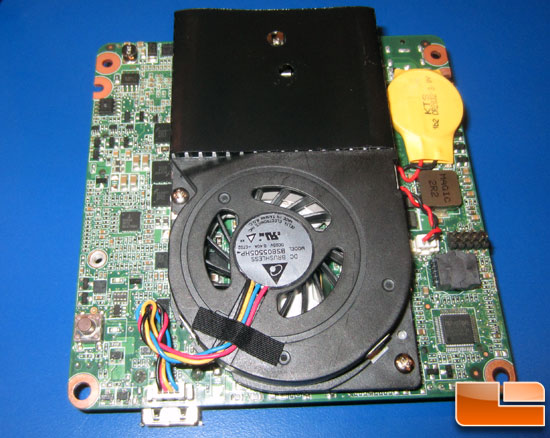 Here is a shot of the cooling solution that is being used on the Intel NUC that we were shown at IDF 2012. It looks like a typical notebook cooler, so nothing too revolutionary there.

The Intel NUC might be just 4″ by 4″ in size, but it has a fairly robust set of input/output connectors. The NUC mainboard that we were shown for the retail market has three USB 2 ports (one at
the front, two at the rear), two HDMI ports and an
RJ45 Gigabit Ethernet socket, and of course the power port. The Intel NUC uses an external 65W power adapter/brick just like a laptop. You might notice that audio ports are missing, but the audio is being sent out the HDMI ports, just be sure you have a monitor with speakers! 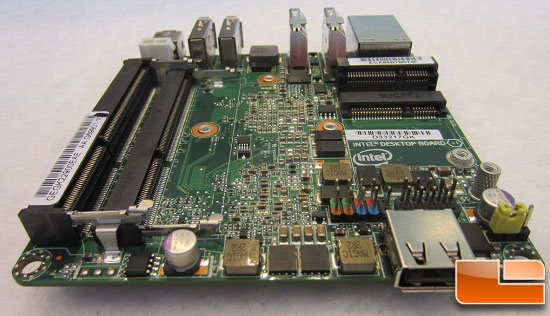 The only things you can alter with this system are the memory and storage drives. The NUC motherboard has two DDR3 SO-DIMM slots that support up to 16GB of memory. You also have two mini PCI-E slots that can be used as an mSATA slot for SSD storage via a full-length PCIe mini card or for a wireless card. You can also use them for other devices that use the mini PCI-E interface. 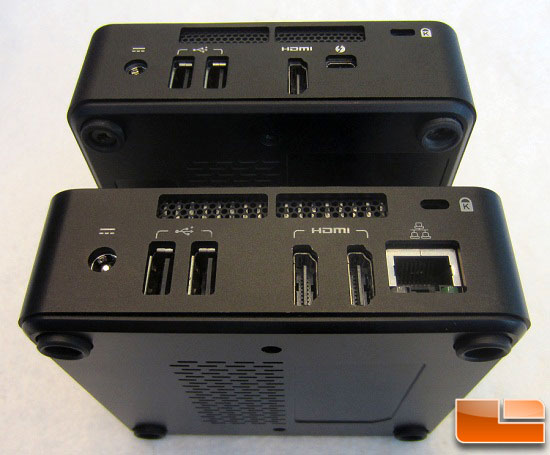 Intel then told us that two different models will be offered at launch and are identical except that one will be Thunderbolt equipped. In order to get the Thunderbolt connector and chipset on the board, Intel had to remove one HDMI video connector and the Ethernet port. You can see the two versions back I/O panel in the image above. That Kensington lock will come in handy on a PC this small!